James Nickman planned an elaborate proposal to showcase the past and the future and wow his bride-to-be. 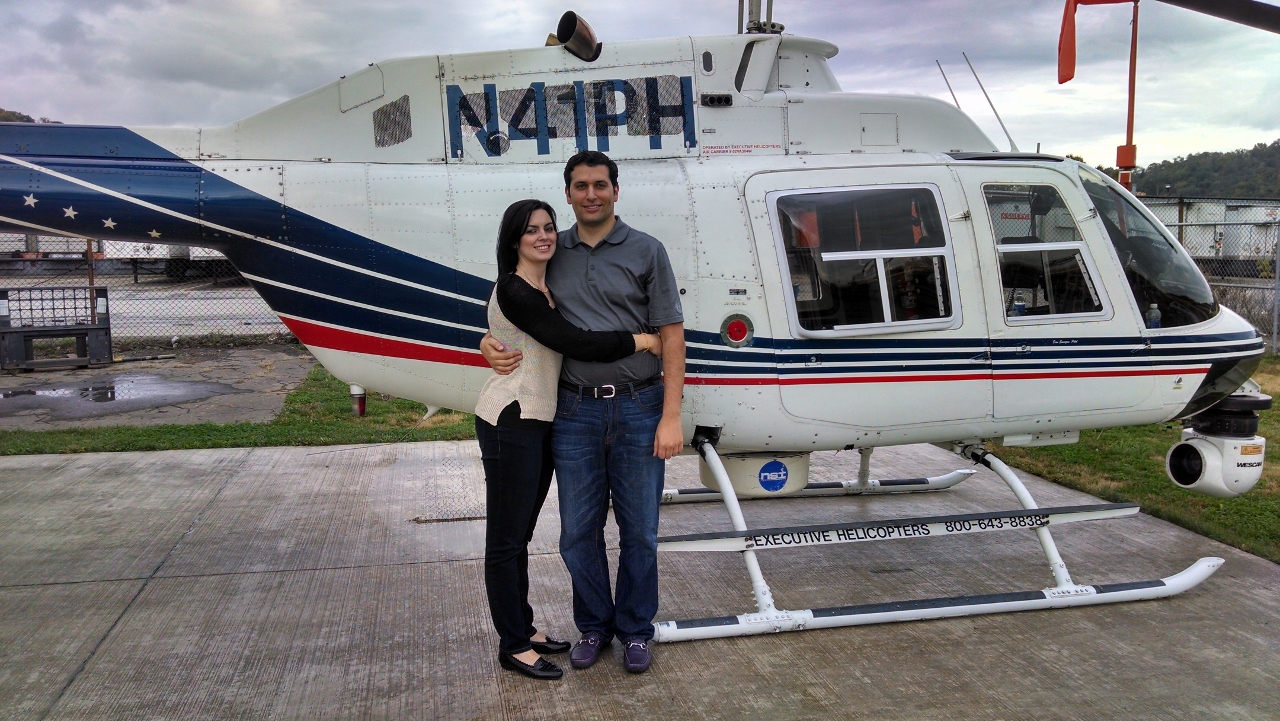 James Nickman chose to incorporate the past and the future in his proposal to Heather Brunner.

He asked Heather to marry him on a random Wednesday when she was least expecting it. They work together at the same business, and he told her they needed to go out and run some errands. Instead, he drove to a tiny airport and gave her a bouquet of flowers.

A helicopter delivered the couple to property they were planning to purchase together for the site of their future home. James surprised Heather with the news that they had closed on the property, a former golf course, and took her inside the former clubhouse where their favorite lavender wine and more flowers were waiting.

Then, they got back into the helicopter and flew to a spot near Route 28, where a car service was waiting to take them to Il Pizzaiolo in Mt. Lebanon, the location of their first date. James rented out the wine bar for them and popped the question when they were alone. Both James’ and Heather’s parents joined them for dinner to celebrate.

James, what went on behind the scenes to plan your proposal?
It took a pretty big amount of coordination . . . The day of, I was trying to make it just like a normal day, so I had someone who works for me go pick up the flowers. I had flowers at the old clubhouse set up on a table in addition to the ones I had given her when I left. I had a guy who works for me go up there . . . to set up the table, to chill the wine and to put the flowers on the table . . . [Heather and I] do work together so if I’m not at my desk, she’s going to wonder where I’m at. If I don’t tell her where I’m going, she’s going to think there’s something up.

Did anything go wrong?
The day of, the weather was not very good. It was raining the entire day . . . The pilot said that it wasn’t looking good. I guess you have to have a certain amount of visibility to be able to fly the helicopter safely . . . I told him to just keep the option open and to let me know. I went home to get ready and shower, and as soon as I got out of the shower, I called him, and he said, “You’re really lucky. It’s cleared up a good bit here, and I think we can do it.” It was literally an hour before this was all supposed to happen that he said it was OK and that we could fly.

What made you decide that this was the right way to propose to Heather?
She’s very creative, and I’m not. I wanted to do something that was different, and I knew she had never been on a helicopter. I knew she was really excited about the property . . . I just thought it was a way to tie together the fact that not only was I asking to marry her, but there were some other things that we had been spending time on, looking for some property, and talking about building a house together . . .  and they actually were coming to fruition.

Heather, did you have any idea what James was planning?
I didn’t have any idea that he would do something that elaborate, because he’s pretty laid back. I haven’t really seen his romantic side so often except for that day. I thought it was amazing that he thought of all that and coordinated it with our parents and had everybody there. He thought of everything. He even had flowers on the table at Il Pizzaiolo, lavender roses. He thought of absolutely everything, because I love flowers, and he had everything taken care of.