Real Pittsburgh Proposals: A View from the Top

Learn how Matt Diehl got singled out by the TSA while trying to keep his proposal plans under wraps.

As a Christmas present, Matt Diehl gave his college sweetheart, Katie Carr, a trip to Paris, but his bride-to-be didn’t know he was planning a sunset proposal atop the Eiffel Tower.

“I figured [after] getting her up there, it would be hard to say no with all the people around,” Matt says.

Katie had been to Paris twice, but each time she was unable to make it to the top of the Eiffel Tower, so the couple made sure to plan a visit the landmark after dinner on the first day of their trip. When they got to the top, Katie went to the restroom, and Matt recruited an Australian family to take their photo.

When Katie emerged, Matt told her to look out over Paris and choose what she would like as the background of their photo. As she turned back around, Matt was down on one knee. Katie said yes before Matt even got the words out to ask her to marry him. 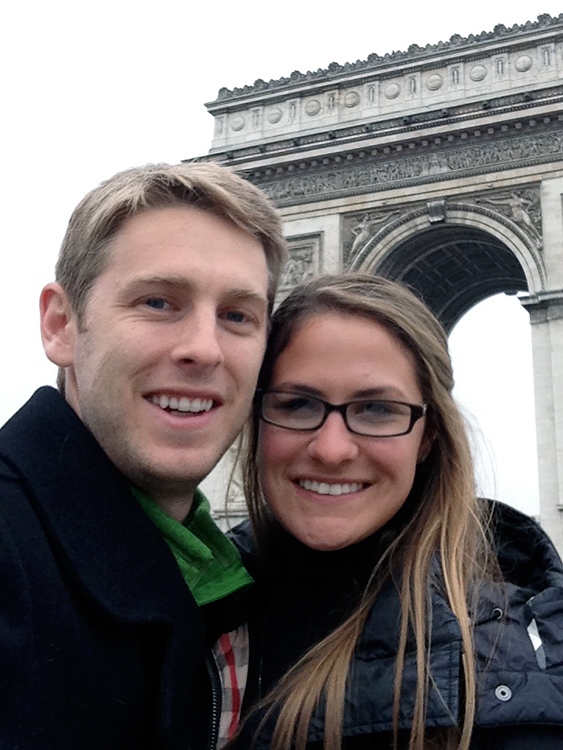 Matt, what kind of planning went into the proposal?
I asked her dad, and immediately upon asking him . . . he told pretty much everyone that worked [at the Olive Garden, where I asked him,] that I was proposing to his daughter . . . Then, what next? The airport. TSA yelled at me for not taking my liquids out of my bag because I had the ring in there, and I didn’t feel like moving anything around because I thought it was well-hidden. Katie wasn’t too happy about that one. I got singled out by TSA.

Was there any point when you thought Katie might find out about the surprise?
We were on a family trip with some extended family friends the week before, and a couple of them went up to her and were kind of suggesting it was going to happen, so that was the start of it . . . Getting ready for that night, I had the ring in a box and then in a box and then in a sock. I thought it would hide it if she ever went into my suitcase. So, she was getting ready, and she was in the shower, so I was slowly unpacking everything, making sure the ring was still in there, and then I heard her turn the water off. Literally the ring was out and the boxes were out. So I scrambled and threw everything back in the bag, and there was a random sock on the bed. She came out and asked, “What’s this sock doing on the bed?”

Katie, did you know at that point, or were you surprised when he asked you?
He had both socks on his feet. It was just super strange. I think I asked him, and he said something like he was going to unpack and put his stuff in drawers and then decided not to. That didn’t really throw me off. Honestly, all this stuff that he’s already mentioned, I didn’t pick up on any of it, even with our family friends saying maybe he’s going to propose while you’re there. People had been saying that for a long time, just because we had been together so long. We were [previously] both in law school, and Matt was in business school at the time that we got engaged, and he had been saying forever that we wouldn’t get engaged until we finished school, so that didn’t even really make me think twice.

Did you think that’s the way Matt would propose?
Honestly, I wasn’t the type of girl that tried to picture my wedding or my proposal. I just kind of thought, “It’s going to happen the way it’s supposed to happen,” so it was amazing. I didn’t really have any expectations one way or the other of how I would get engaged one day, just because I never really thought about that stuff growing up, but it was the most amazing thing. I couldn’t have pictured it any better. And it was very much, down to the fact that Matt didn’t say anything, just very us. It was really perfect.