Re-Live the 25 Best Restaurants Party With Our Live Blog

The only way to make a smorgasbord of the best food in Pittsburgh taste even better? Booze. 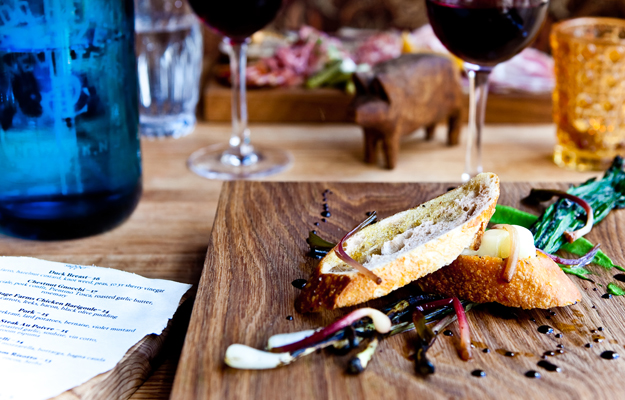 Monday night was Pittsburgh Magazine’s annual foodie blowout, the Best Restaurants Party. At the risk of filling your perfectly normal Thursday with a sense of regret and amplified hunger: you really, really should’ve been there.

Over fifty restaurants filed in over the course of the afternoon, setting up every manner of food service option imaginable, from cookie trays to an unidentifiable molecular gastronomy apparatus (yup, that was Salt of the Earth.) The full circumference of Heinz Field was lined with delicious offerings — which is to say nothing of the drinks, silent auction, live entertainment and everything else that makes Best Restaurants our signature event.

I thought that I’d take a break from normal blog procedure — whatever that is — to post my personal timeline from the party. This is certainly to endorse the many fine dishes and restaurants I sampled last night, but also to put you on notice for 2013. We don’t have a date yet, but you should probably go buy a 2013 planner now and block off the entire month of June just to be safe. If you missed it this year, please don’t make that grievous mistake again.

1:00-4:45 — I do my professional duty, helping to shepherd arriving restaurants to their designated space inside Heinz Field. This is fine, but frustrating in that it involves long stretches of standing in a confined space smelling food I cannot yet eat. Joseph Tambellini’s pallet of meatballs nearly drives me to madness.

4:52 — I sit in eager anticipation of the opening V.I.P. hour. Not only does this time period mark the easiest access to the parade of food, but also an open bar. I consider that of all possible words that can follow “open”, “bar” is perhaps the best.

5:00 — Drinking commences. I order a Tom Collins. I’m asked if I’d like it tall; thinking that this would mean a tall, skinny glass, I agree. Instead, I receive a full pint glass of cocktail. While this causes dramatic flashbacks to poor decisions during junior year, I accept.

5:04 — It almost immediately occurs to me that I’m drinking on an empty stomach, and there are over fifty potential remedies to this problem. I head for Heinz Field’s West Lounge – this year’s event was so big, we took over the entire building.

5:10-5:15 — The first great wave of food consumption. Wonton Tuna from Ibiza! Beef Brisket from The Porch at Schenley! Fried cheese from Mediterrano! I feel that I should slow down. I ignore that impulse entirely.

5:20 — My interest was piqued earlier, when I was escorting Nicky’s Thai Kitchen to their booth; where most of our guests prepare their dishes in their own kitchens and then transport them to Heinz Field, Nicky’s Thai was rolling in fresh produce and started chopping on arrival. The result was a quartet of savory dishes representing a nice cross-section of their menu; I chow down on some Cashew Chicken.

5:26 — In picking up a dish of slaw with pulled pork from Toast!, I can’t help but notice that Burgatory is offering whole burgers. They’re not quite the size of the genuine article, but much larger than anything that could be termed a slider. About the size of a normal fast-food burger, say. My new mission: avoid this burger. After all, stomach space is at a premium, and it isn’t even 5:30 yet. I can’t be full this early! Must resist!

5:27 — Efforts to resist fail in very short order. As I sink into a Morty’s Steakhouse Burger, I resolve that I’ll just take a long break and renew my efforts after some digestion has occurred.

5:40 — To give myself a few minutes to breathe, I inspect the silent auction. While I’d like to bid on the Italian getaway, there are several more zeroes in the opening bid than I currently have in my bank account. Instead, I open the bidding on a nice coffee package. By the time I walk by again, I’ve already been sizably outbid – yinz are generous. And with a deserving charity like Family House benefiting from the auction, I’m thrilled to be outpriced.

5:52 — A break doesn’t mean I’m skipping dessert. My first stop at the Gullifty’s booth, to pick up a Raspberry Brownie.

5:56 — Having finished my giant-sized cocktail, I decide it’s probably wise to switch to beer. Fortunately, we’ve got some Erie Railbender going around.

6:00 — My lovely girlfriend Stephanie is meeting me; I try to shepherd her through the staggering line waiting outside. For the first time, our queue wrapped all the way around the stadium.

6:05 — We sit in one of the lounges as the floodgates open. If you do attend next year (and, as we’ve discussed, you will,) get in line early; the spontaneous admittance of 1,500 hungry people is quite a sight to behold.

6:35 — Do I need chips and guacamole from Mad Mex on top of that pile? Well, yes, obviously.

6:47 — This particular streak of nibbling wraps up with Scallop Seviche in Passionfruit Gazpacho from Penn Avenue Fish Company and I-Don’t-Even-Know-What-But-It-Was-Awesome from Spoon.

7:03 — We wander back to the West Lounge and discover a hidden gem, Oakdale’s Cafe Chocolade. They’re preparing tiny meals – a small salad, a tiny gluten-free crab cake and an excellent brownie.

7:13 — Salt of the Earth is handing out an appropriately inventive dish served in a mock tuna tin, with crackers on top. It could be that nowhere else in town is as good at living up to expectations as Salt.

7:14 — Stephanie is from Erie, so we are not permitted to pass the Smith’s Hot Dogs booth. Even against everything else on offer tonight, they stand on their own.

7:18 — My seriously final trip to the booths takes me through Tamari and Park Bruges. I have long since passed merely feeling full, and I’m approaching Thanksgiving-level stuffed.

7:24 — But there’s always room for dessert, right? Back to Gullifty’s for Macadamia Nut Truffle. A passerby en route to a neighboring booth quite seriously questions why the restaurant is called “Braddock’s American Brassiere.” Not brasserie. He said brassiere. Note the spelling there. I decide not to bother informing him that Pittsburgh’s finest hotel restaurant is not, in fact, named after an undergarment.

7:35 — That’s it, I surrender. We recuperate briefly before making our way to Rivers Casino for the afterparty, where there’s more food, yet another open bar, and free slot play to be had. The afterparty demonstrates what I’ve said many times in this space — in just about every conceivable way, Rivers is the perfect conclusion to just about any evening out in Pittsburgh, and I’m thrilled that we’ve been lucky enough to host some of our events there.

As for recommendations, literally everything I had was delicious, so pick a bolded phrase at random from the list above. Now, if you’ll excuse me, I have some digesting to do.