Sidney Crosby, Pascal Dupuis and the tale of the toilet waterfall. 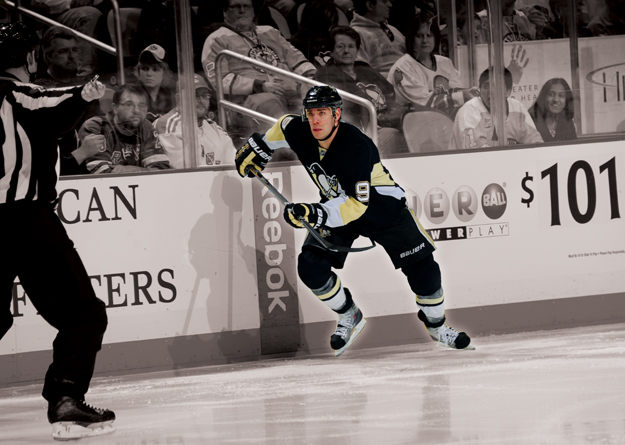 Pascal Dupuis is in Sidney Crosby’s bathroom, and he’s up to no good. The world’s greatest hockey player has stepped out of his hotel room for a few minutes, and it’s the perfect window for Dupuis to commence the delicate engineering of a booby trap. He lifts the heavy porcelain lid off the toilet, looks down into the tank and chuckles.

At this point in the story, you should be aware that Dupuis has four children, two dogs, a cat and a wife whom he chats with via Skype for hours when he’s on the road. He’s anchored to a cross necklace that he kisses four times before the puck drops, once for each child. The first two things he brings up when he’s asked why he took less money to stay in Pittsburgh are good neighbors and babysitters.

He is, for all intents and purposes, a wholesome All-American-French-Canadian dad. Which is precisely why you should never, ever leave your hotel room unattended to even the nicest of hockey players. At this moment, Dupuis is jangling nozzles, reattaching tubes and doing all sorts of nefarious reconfiguring to the throne of the NHL’s golden boy.

The lavatory, apparently, is the latter. Dupuis carefully replaces the lid and takes a step back to admire his masterpiece.

“You have to take the tube out of the tank and tilt it perfectly toward where the person stands,” Dupuis says. “Then you put the lid back on but make sure that the end of the tube is sticking out slightly so the person won’t notice.”

When Crosby returns, Dupuis is innocently talking to his wife on his laptop, as usual. After a while, Crosby enters the bathroom. The door clatters shut. Will he notice? Silence. Dupuis covers his mouth. Anticipation mounts.

You can win a league MVP, a Stanley Cup and an Olympic Gold medal. You can be revered by millions upon millions of people. You can be the coolest, most laid-back guy in the world. But when you take a direct hit to the chest from a toilet squirt gun, you’re thrown into a state of discombobulated hysteria just like anyone else.

“The water just keeps shooting and shooting until the tank is full,” Dupuis laughs. “He couldn’t figure it out right away. He had no clue.”

After a few minutes of panic, the front desk receives a call from the distressed Captain.

Pascal, four kids? Seriously, how do you keep it together during the season?
The toughest part is coming home from a game at night and not being able to fall asleep until 3 a.m. This morning, we had to get the oldest one on the bus, the youngest to daycare and another to the doctor. It’s intense, but having a great wife makes it a lot easier. Basically, she has five kids, including myself.

And you’re a hockey dad as well, right?
Kody, my oldest, plays for the Pittsburgh Hornets. I enjoy watching him so much. It reminds me of my father sitting in the stands watching me, and I have to catch myself on the drive home talking about plays or things he did out there. I’m like, Man, I can’t push him too much. It’s all about having fun.

You decided to take less money to re-sign with Pittsburgh this summer. Why?
For us, it’s about being in our comfort zone. We’ve got great neighbors and a great babysitter. When you’ve got a family, it may sound stupid to say, but we know where the doctors are, the dentist, the pet salon. Hockey-wise, it’s a great fit for me. You play in front of a sellout crowd every night, you travel with Sidney Crosby and Evgeni Malkin, and other buildings are packed as well because you’re traveling with these amazing players. Pittsburgh is really special to us. 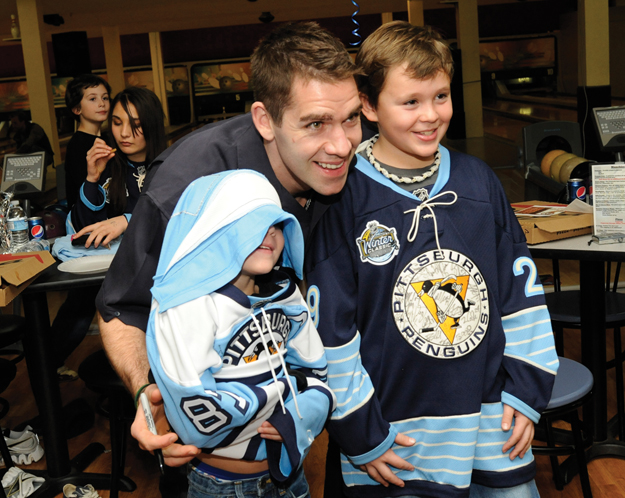 
How fast did the congratulatory texts come in after you signed?
Oh man, as soon as it was announced, about 15-20 texts came rolling in. They knew how much I signed for, so luckily they didn’t hit me up for the next dinner bill.

Do you get goosebumps when listening to Dan Byslma’s pregame speeches?
(Laughing) Yeah, Dan’s a pretty emotional guy. He’s so passionate about the game, and his attention to detail is through the roof. He really knows how to get guys going. Guys want to play for him because they’re having fun coming to the rink. The energy here is different than a lot of places—guys caring for each other, guys wanting the next guy to do well. Maybe it’s still a job, but nothing is better in life than to play hockey for a job, I think.

Do you ever feel outside pressure to be a goal-scorer while playing alongside Crosby?
You know what, I can’t change my style at this point. I only know one way to play—and that’s 100 percent every shift. If I play with Sid or Geno or Craig Adams at center, I’ll play the same way.

Who’s the funniest chirper in the league?
Aaron Asham is pretty funny. I think maybe Flower [goalie Marc-Andre Fleury]. You get Flower trying an empty-netter, and the guy can barely get it past his own crease. He thinks it’s hilarious.

What’s one thing even your teammates would be surprised to know about you?
Probably that I love to cook. Anything. You name it. I’m the guy who texts all the other guys where we’re going for dinner. I’m actually a pretty big fan of the Food Network. (Looks around the locker room) Shouldn’t say that too loud.

This article appears in the January 2012 issue of Pittsburgh Magazine.
Categories: From the Magazine, Hot Reads, Penguins