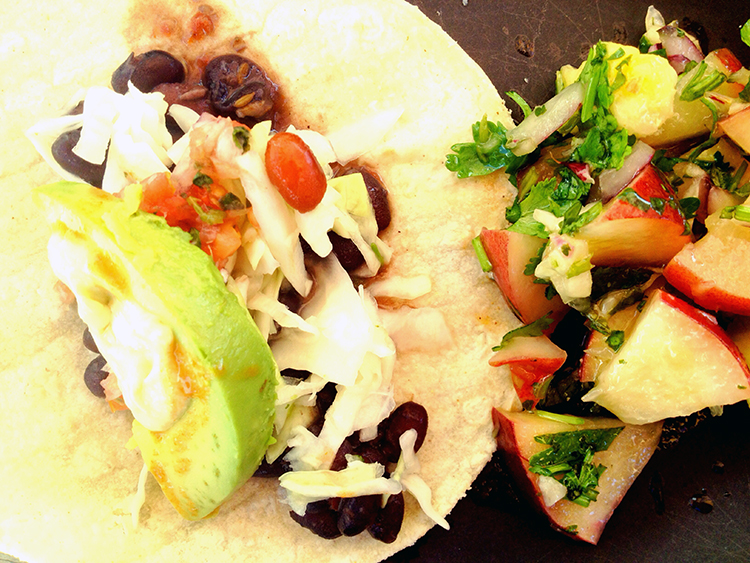 En fuego! That’s you. You’re on fire. Not like embarrassingly sweaty on fire. We’re talking about the good kind. The dog days of humidity and flop-sweat are over, and you are ready to celebrate the last weekend of summer in grand fashion.

Because you’re going to be creating the biggest, baddest, freshest taco bar in town. Friends will come from miles away just to experience it.

Picture it: All of those mouthwatering ingredients overflowing in a warm tortilla.

You superstar, you. The best part: These are super easy to make. I pinky swear — aside from the black beans, which I made ahead of time — it only took me a couple of hours to whip up everything, lay out the spread and clean the kitchen. The basic ingredients do the heavy lifting with their simply scrumptious freshness (it’s what summer is all about), and it’s all amplified with a boost from lime, red onions, garlic and cilantro (sorry, cilantro haters).

You’re so money, and you don’t even know it.

Just be prepared. There will be silence as your guests make their way around all the fixin’s.

The silence is reminiscent of a gymnast making the final approach before the dismount. The crowd is stupefied and holds its collective breath. Then, as soon as the gymnast lands — arms raised triumphantly — the crowd erupts!

As everyone takes their first bite and the realization hits them on just how kick-ass this spread is, stand in the middle of the room and raise your arms to the heavens, gymnast-style. Your crowd will go wild. I pinky-swear they will.

When your friends ask how you possibly managed to construct such a monster undertaking, just keep it your little secret.

And now, the recipes. Just for you, I’ve measured everything out to precision. All of these recipes make exactly a ton.

Invite everyone you know. Ask them to bring some bebidas y cervezas. Remind them that there’s no cutting in the taco line. Then kick back and say hasta la vista, summer! 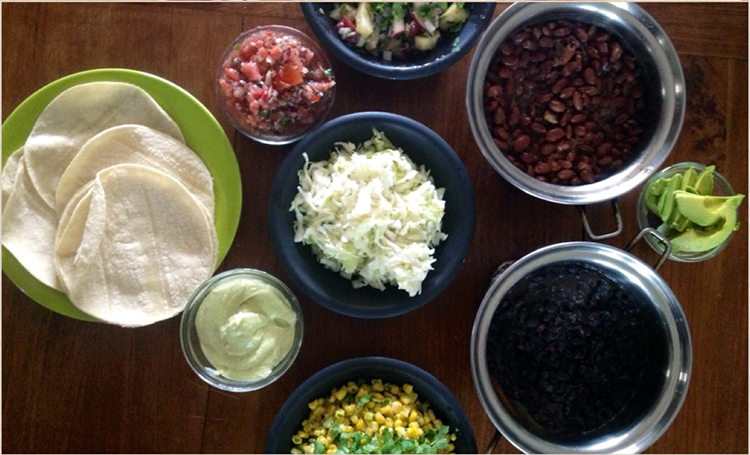 
Sauté garlic and onions in olive oil for about a minute. Add oregano and cumin. Stir for about 30 seconds. Add black beans. Sauté together and add water. Bring to a boil and then let simmer until the liquid evaporates. Season with salt and pepper.

*You can omit pineapple and just use peaches. Increase peach amount to 3 cups.

Cut off the kernels (save the cob for broth!). Toss everything together.

Head on over here for the:

And don’t forget the sliced avocados!