Pittsburgh artist Robert Qualters has been inspired by the visual richness of our region and has recorded and interpreted it with a unique style. Now, at age 80, his legacy is being celebrated — and he has no plans to lay down the paintbrush. 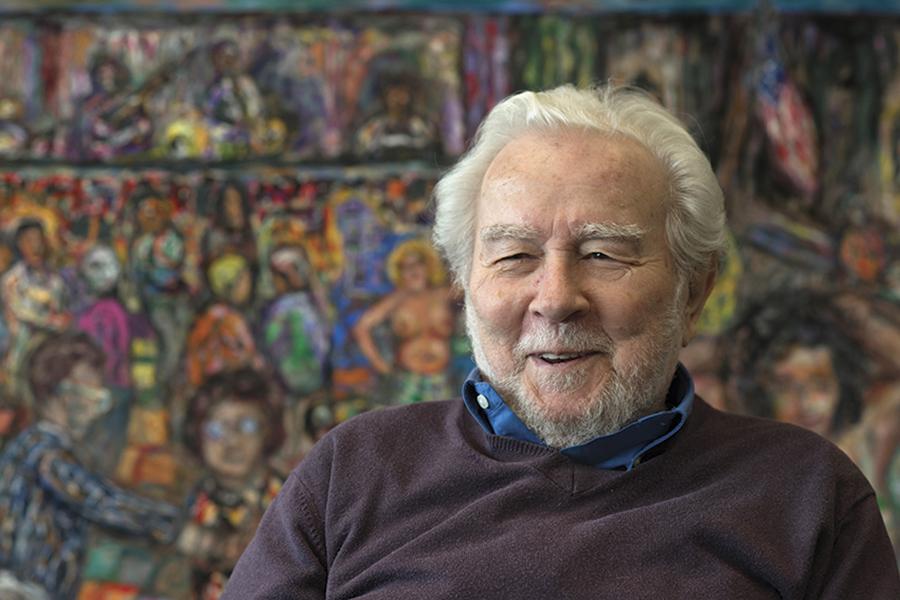 Heading across the Homestead Grays Bridge toward the southern side of the Monongahela River, motorists are treated to a marvelous diorama-like spectacle: Along the steep hillside, houses and buildings are strung together like words in overrun sentences, with church domes and steeples serving as occasional punctuation.

On a dreary winter day, with a Pittsburgh gray overshadowing but not overpowering myriad visual components, you might agree the scene resembles a Robert Qualters painting. Qualters’ studio location can be glimpsed on the slope to the right of the bridge; there, the lofty yellow-brick bell tower of a decommissioned elementary school serves like a pushpin on a map targeting the exact site.

Inside the cavernous interior — home to a sign company, several other artists’ studios and (reportedly) ghostly denizens from its past — Robert Qualters swings open a door and offers a hearty welcome to his inner sanctum: a cool, shabby-chic former classroom. Its reincarnation as a studio might appear almost karmic for someone who’s been both student and teacher.

A burly, affable guy with a wooly beard, Qualters looks and acts years if not decades younger than the big 8-0 milestone he’s about to celebrate on March 13.

How does it “feel” to turn 80? Qualters notes that recent events can seem more difficult to remember, yet flashes from the distant past often come popping up. “I was just thinking of ‘Again,’” he says. “It’s a song from a movie with Ida Lupino I saw in high school.” He pauses then suddenly recalls the name of the film-noir classic. “Road House!”

This is that once in a lifetime;

Those lyrics seem custom-made for such a special birthday, and this year Qualters celebrates several once-in-a-lifetime highlights: the release of a documentary film, “Bob Qualters: The Artist in Action,” by Joe and Elizabeth Seamans; a retrospective of his work, “Robert Qualters: A Life,” curated by Vicky A. Clark at Pittsburgh Center for the Arts; and the publication by University of Pittsburgh Press of a biography by Clark, “Robert Qualters: Autobiographical Mythologies.” 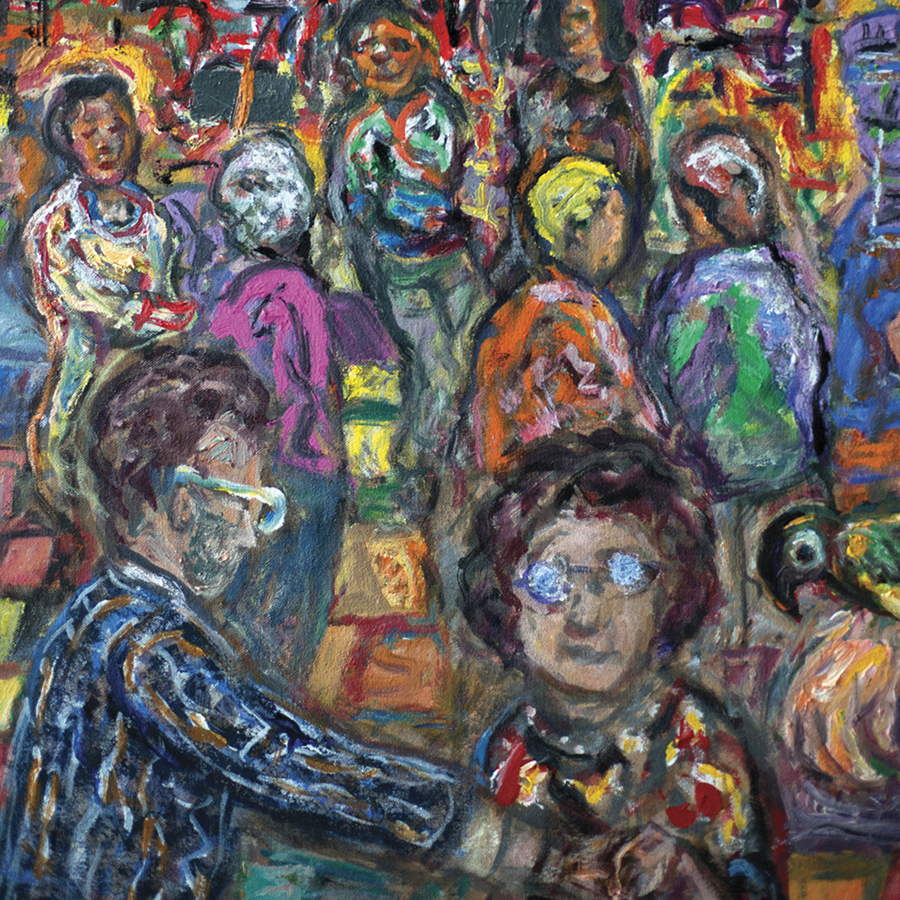 A number of Qualters’ paintings are scattered around the studio. Near one wall, an interpretation of the old Allegheny County jail — a national landmark that’s one of Qualters’ favorites — appears to be having a dialogue with a neighboring canvas, “The Old Men’s Dreams,” which focuses on a modest mini-mart in Homestead.

These are iconic examples of his work because Qualters probably is best known and most beloved for his paintings and mixed-media depictions of our region, including both the venerable and mundane. In that specialty, he could be described as a visual historian — some subjects, such as downtown’s people-pleasing Jenkins Arcade, are long gone — and also as a raconteur. In that role as storyteller and pundit, he also occasionally hones his distinctive style by using the borders of a piece to inscribe his thoughts and memories, engaging the viewer and adding colorful compositional elements. (“I had a studio here in 1959 where the PAT buses stop now,” he writes on an “East Liberty Bus Station” canvas.)

Recognizable local subject matter, the viewer-friendly portal to his art, isn’t the only indelible quality of Qualters’ work. The exuberant, energetic look of his art also identifies a style as unique as a fingerprint. Expressionistic and highly detailed, Qualters’ very painterly surfaces can seem like pixilated confetti. “I never met a color I didn’t like,” he says with a laugh. That palette also informs the atmospheric dynamics he embraces. “I love weather,” he proclaims. “Even snow and rain.”

“Despite diverging directions in contemporary art, Bob has steadfastly pursued his own unique vision with works that contribute personal and collective memories to the history of Pittsburgh, animating, with colorful glimpses of the quotidian, the standard and now outdated characterization of our city as an industrial behemoth with belching pollutants. Like several other artists, especially writers in a variety of genres, he adds a lived life to the official story.”

“Weather” serves as a category on Qualters’ website [qualtersart.com] for organizing artwork that includes seasonal and weatherly valentines, such as “Doughboy Square: Winter” and “Rainy Day in Homestead.” In “Operatic May,” a phantasmagoric take on the Westinghouse Bridge, the entire scene appears to be viewed through the aurora borealis.

“I never tried to make a style; it just happened,” Qualters admits. “I do the kind of painting [that] you know what it is. I do what feels right.” Through the years, weathering the many trends in the art world, he has remained constant and true to his focus and vision. To truly “get” the singular achievement of Qualters, you must venture closer and peer deeper into his art, which can be experienced on multiple levels, as in “Gulliver’s Travels.” 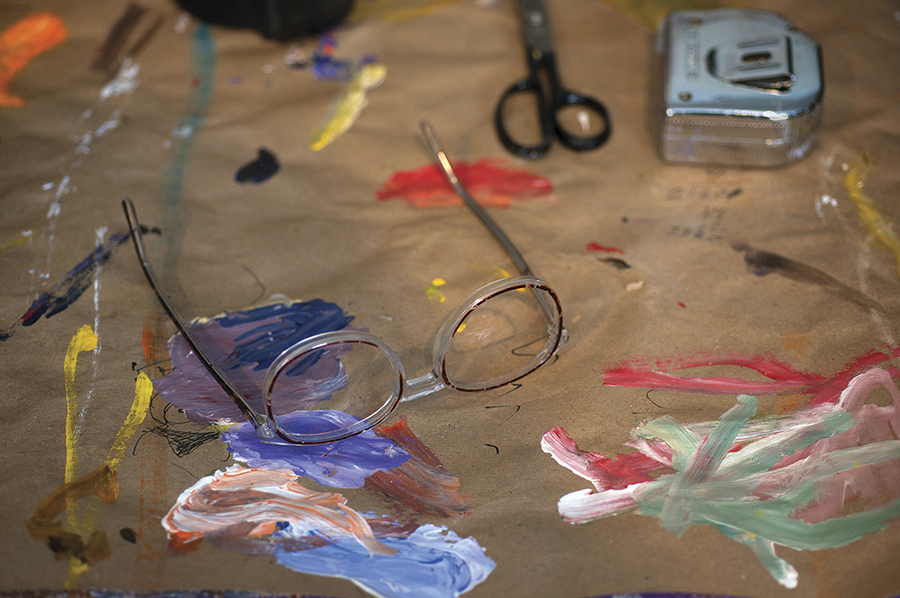 Back to “The Old Men’s Dreams”: Look closer and you’ll see a strange little devil cavorting incongruously. In the foreground on the right, several dark figures, somewhat menacing, observe the scenario. Qualters says they’re inspired by figures in paintings by Balthus. And there’s yet another layer. “Vicky [Clark] pointed out that Balthus took one of the figure poses from a painting by [Georges] de la Tour, a much earlier artist,” he says.

In one of Qualters’ autobiographical works, he pays homage to local self-taught painter John Kane by posing himself shirtless in the same stance that Kane used in a self-portrait. Several more of Qualters’ favorite artists figure directly into his compositions, including the silkscreen-print series “Lessons of the Masters.” Here, luminaries such as Brueghel and Vermeer are placed in ironic or humorous situations, and Pittsburgh and its architectural and topographical patrimony are enlisted as backdrops. “Edward Hopper Was Driving” envisions Qualters as a passenger in a car with the famous American artist at the wheel as it emerges onto the Fort Pitt Bridge from the tunnels.

“As a conjurer of life in 20th-century industrial Pittsburgh, painter Robert Qualters has no peers. Possessed of a distinctive style and palette, Qualters’ work stands as rich testimony to his long life of observation matched by great powers of evocation.”

— Richard Armstrong, former director of Carnegie Museum of Art and current director of the Solomon R. Guggenheim Museum and Foundation in New York

Qualters’ current studio in West Homestead is about as far as the Squirrel Hill resident has ventured upriver on the Monongahela during his lifetime, at least in terms of a home or studio. A McKeesport native, he’s the son of Robert Qualters, an Irish-American county assessor, and Stella Theresa Wolf Qualters, a German-American schoolteacher and an artist in her own right who encouraged her son’s talents and ambitions.

As a boy, growing up in the once-bustling Mon Valley, he was curious and impish. At age 3, he and a friend went to explore a new bridge, and little Bobby fell 20 feet after slipping through the ties of a street-car viaduct, surviving unscathed and making newspaper headlines. Qualters laughs about playing hooky from elementary school with a friend to catch a movie. “Scarlet Street,” he says, identifying another film-noir gem that, coincidentally, revolves around a painter.

The Qualters family, which included two sisters, later moved to Clairton. Robert graduated from Clairton High School, where his coursework included art. His next stop was Carnegie Institute of Technology, where he studied with the distinguished artist and professor Robert Lepper. Then came a stint in the U.S. Army, another year at Carnegie Tech and a move to California, where he earned a B.F.A degree at California College of Arts and Crafts.

One of Qualters’ teachers and mentors there was Richard Diebenkorn, a major figure in the art world whom Qualters speaks of with awe. “Best teacher I ever had,” he says. “A decent man, absolutely committed to painting.” Through Diebenkorn, Qualters was part of the first show of the Bay Area Figurative Movement of Representational Painting, of which Diebenkorn was a founder.

But then it was time to go home, or at least start working his way back home again.

“I left California because I wanted to be here,” Qualters explains. After teaching and doing graduate work at the State University of New York at Oswego and earning an M.F.A. at Syracuse University, he returned permanently to Pittsburgh in 1968. Since then, he has taught at a number of area colleges and universities, including the University of Pittsburgh and Carnegie Mellon University. In terms of his creative future, Qualters posed a question to himself: “When I got back here, I asked, ‘What am I going to do?’” Then it came to him: “This place!” 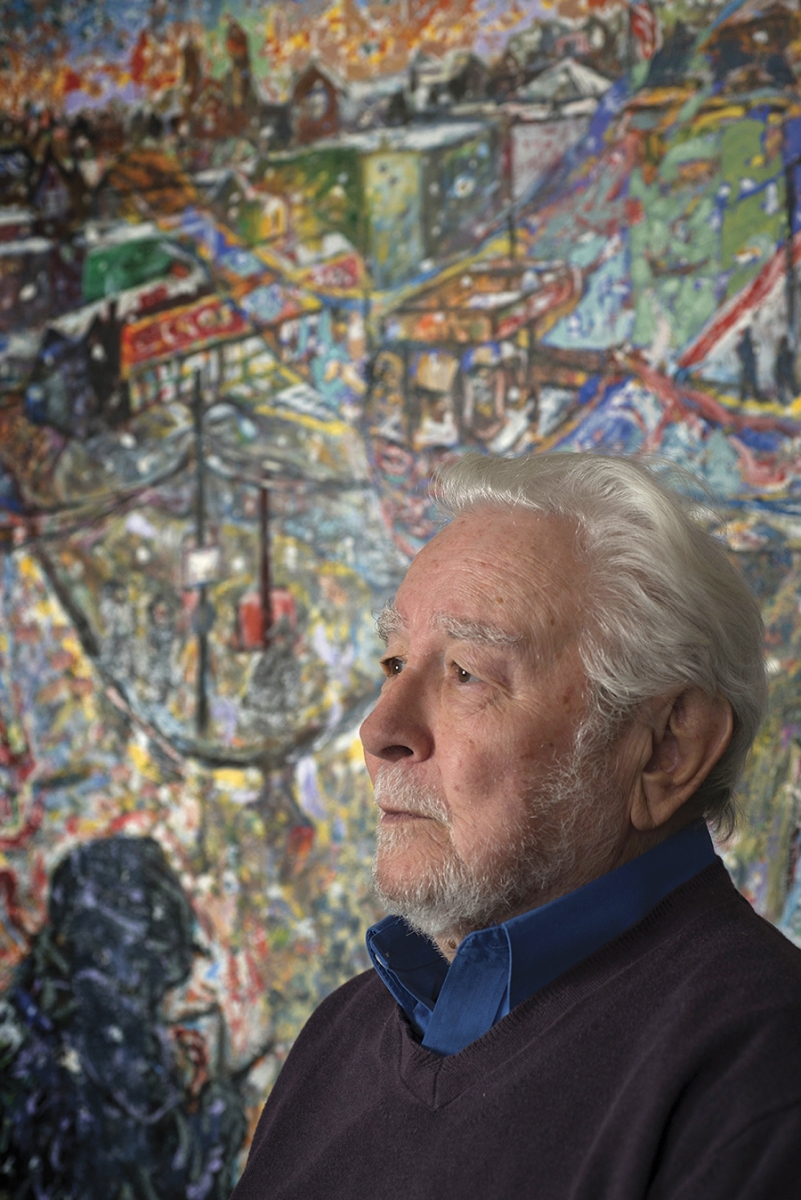 When considering such a long and distinguished career, it’s not possible to mention all of the highlights on Qualters’ lengthy resume. He has worked on illustrations for books, collaborated with other local artists on numerous projects, completed public art and installation commissions and worked with high school students to create murals showcasing local history. He’s been the Artist of the Year at Pittsburgh Center for the Arts and has served as president of the Associated Artists of Pittsburgh. His art has appeared in numerous exhibitions and is represented in the permanent collections of Carnegie Museum of Art, Westmoreland Museum of American Art and the Oakland (Calif.) Museum of Art as well as in many corporate and private collections. He also is the father of two sons, three grandsons and a granddaughter; his wife, Joanne Ricchi Qualters, is deceased.

As he enters his eighth decade, Qualters’ style has not calcified but continues to evolve: “Looser and more imaginative as I grow older,” he says. He proudly shows off a recently completed painting in his studio: “The Dance,” a joyful romp, based on an old photo from the 1960s of an Elks Club event. Qualters has manipulated reality by introducing several Rubenesque female nude figures, who seem to be having a good old time.

Qualters rules out any plans to retire, although he does say he has slowed down a bit. Still, he notes proudly that his mother had a retrospective exhibition at the old Carson Street Gallery when she turned 80. As he contemplates the future, Qualters sees a challenge. “I don’t know what I’m going to do next,” he says. Planning an encore can take time. Perhaps Qualters needs a little time to play hooky again.

In the movie “Scarlet Street,” the artist is asked how long it takes to paint a picture. “Sometimes a day, sometimes a year. You can’t tell. It has to grow,” he answers. He also opines, “Every painting, if it’s any good, is a love affair.”

That’s borne out in the legacy of Robert Qualters.

This article appears in the March 2014 issue of Pittsburgh Magazine.
Categories: Arts & Entertainment, From the Magazine