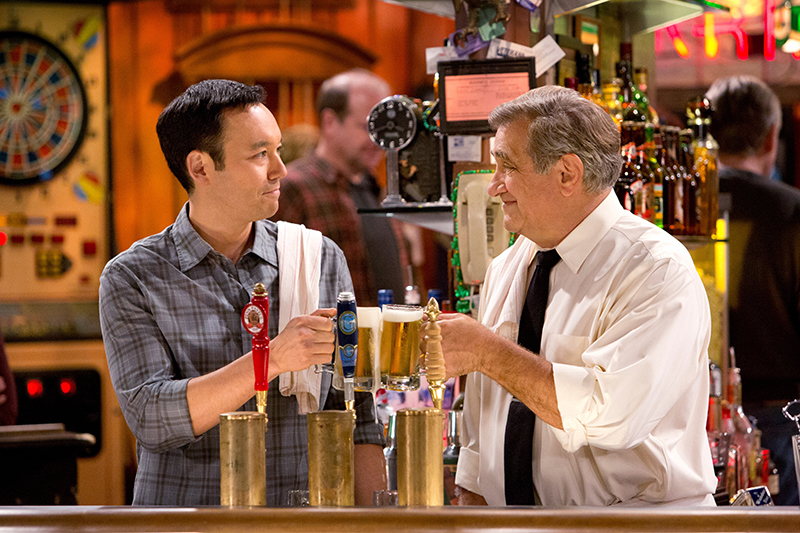 Steve Byrne has a dualistic personality. His observational stand-up is often raw and raunchy, but he’s a committed family man with a 1-year-old daughter. Onstage, he’s a spastic screwball who wears a suit; he once played 15 New York comedy clubs in a single night.

In reality, Byrne, 39, has paid his dues and become a well-known comedian. In his TV sitcom “Sullivan & Son,” Byrne’s character, Steve Sullivan, escapes New York’s corporate world to return to life with his parents in Pittsburgh and take over the family bar.

Byrne, like his TV persona, is of Korean- and Irish-American descent; he explored ethnic uniqueness in his most recent Comedy Central special, “The Byrne Identity.” We spoke with him recently about his life in funny business.

You were born in New Jersey and have lived in many cities. What’s your relationship with Pittsburgh?
I moved to Pittsburgh in seventh grade because my father worked for the Yellow Pages. When we moved, we lived in a motel next to Monroeville Mall, and we’d spend the weekends looking at properties. I consider Pittsburgh [to be] where I grew up; my favorite memories are all from Pittsburgh. I remember the [Three Rivers] Regatta. I remember going to the Point [and] strolling [through] Ross Park Mall when it first opened. I remember going to Penguin games constantly, buying scalped tickets on my own. I feel really fortunate that I got to grow up in such a great environment. It was a place [where] I always felt safe.

You’re known for your work ethic. Where does it come from?
I grew up being a class clown in Pittsburgh, but I had never been to a real stand-up show in my life. [Teachers] let me goof off, but my grades sucked. When I moved to New York, I got a job at Caroline’s Comedy Club. I basically answered the phones [and] took reservations. It took me a few months to actually perform. When I did, I finished my set and went outside in tears. It was an epiphany. I thought, “This is what I want to do for the rest of my life.” I think when you have that mentality, that love for whatever you choose to do, you will make room every day to pursue that. That’s why I did 15 shows in one night. I would lose money. That’s what I was willing to do — because I loved it.

After doing the stand-up circuit for so many years, do you ever miss those early days?
I never take anything for granted, but there are times when I’m walking around a [TV studio] set and I think about that part of my life. I remember this one time, [when] I was literally driving around the Midwest for one-nighters, sometimes not getting paid. I was driving a Saturn, and I put 200,000 miles on it in two years. I put the seat down, looked at the stars and thought, “One day you’re gonna make it, and you’re going to really appreciate this.”

What are the origins of “Sullivan & Son”?
I’ve been friends with Vince Vaughn for a long time. He’s always been happy to share some insight with me. He’s one of the most supportive friends I’ve ever had. He took me to Beijing for the Olympics, and it really changed my world view. I scrapped everything I’d been writing. He asked me, “Why don’t you write about what you think of America — what you think of the world?”

What prompted you to set the show in Pittsburgh?
At the time I wrote “Sullivan,” I was living on the road — maybe eight years straight of living out of a suitcase and having no personal life. I just thought, “What would really be meaningful to me?” And it was being at home. I thought, “What is home to me?” And the first thought was Pittsburgh. A lot of the shows you see are based in L.A. and New York, but to me, I romanticize Pittsburgh because I just love it.

How has the experience been?
It’s amazing. In the first few episodes, you don’t know what’s working. The core of [the story] was always there — laid-back Irish father, penny-pinching Tiger Mom. Then, as the show goes on, things spin out of control in ways you never expected. In [the second] season, things get even crazier.

You have collaborated with many fiercely independent and outspoken comics, such as Drew Carey, Colin Quinn and Vince Vaughn. Do you share a perspective?
I think my world view is mainly expressed in my last stand-up [“The Byrne Identity”]. I’m someone who tries to judge people as individuals. I talk more about race lately because it is something that is part of my identity. As far as my views on government or policies, I always think, “Hey, you can turn on CNN or MSNBC.” When people work hard all week, and they make plans to have a night on the town and go to my show, I really appreciate them for coming out. I try to keep it as middle-of-the-road as possible. It’s why I get dressed up in a suit, for example. I actually care that somebody paid money to come see me. I, in turn, care about what you see onstage. If someone isn’t laughing, I try to win them over. There’s a reason I stand outside after the show and shake everybody’s hand. Maybe it has something to do with Pittsburgh. It’s a city that will always keep me humble.