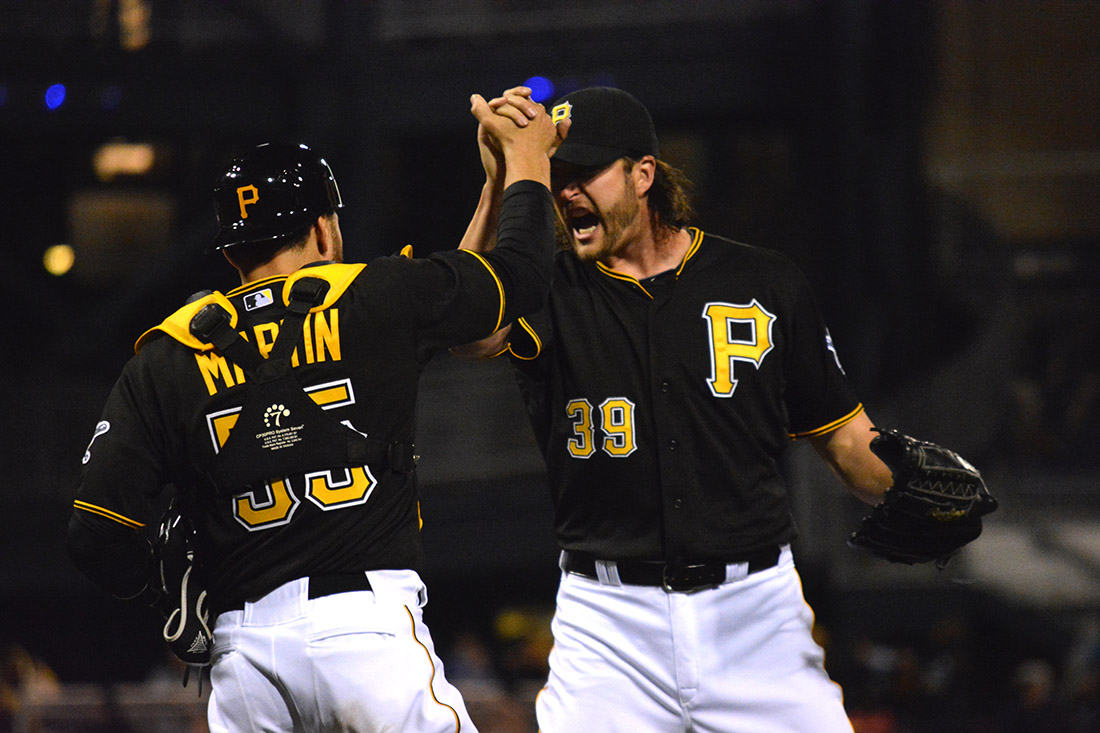 The jubilant fist pump that Jason Grilli uses to punctuate his saves isn’t simply an expression of joy. It’s also a symbol of his perseverance and success at a job he’s always believed he could do.

The Pirates closer has been fighting since he made his big-league debut in 2000, clawing his way to the back of the bullpen. Grilli also struggled through injuries so devastating that he began to lay the foundation for life after baseball.

Now, the 36-year-old is striking out opponents at a staggering clip and racking up save numbers that rank among the best closers in the game. This comes less than two years after the Philadelphia Phillies couldn’t find a spot for him on their roster.

Philadelphia’s oversight led to Grilli’s signing with Pittsburgh in July 2011; he re-upped during the past offseason to stay with a manager who’s been a mentor for him and an organization he believes has potential to become a consistent winner. He’s also become a fan favorite at PNC Park, in part for his frequent interactions with his 40,000-plus Twitter followers — and also for a last name that lends itself to sandwich puns.

Even though his role has changed from somewhat-anonymous setup man last season to the Bucs’ big name in the ninth inning this year, Grilli will stay true to his on-the-mound philosophy: Put the pressure on opposing hitters, and play the game on your own terms.

You’ve had several roles throughout your career. Has being named the closer changed your mindset?
No, I’ve always been aggressive. My style hasn’t changed; my mentality hasn’t changed. The only thing that’s changed is the inning I’m pitching in.

What made you decide to re-sign with the Pirates this past winter?
Mainly, Clint Hurdle [has] really supported me in my career; [he] gave me every opportunity. My teammates, for sure. The fans. Pitching at PNC Park. Being a free agent, I had a few good teams that were also pursuing me — and there was nothing better than everything [here in Pittsburgh].

What makes the environment here so exceptional?
It’s one of the most beautiful ballparks in all of baseball, for one. The weight room is unbelievable, our clubhouse is unbelievable. The kitchen and the chef. And more important than the materialistic side of it — the guys [who] are in the room.

How has the team changed since your arrival?
The Pittsburgh organization was in development mode. Now it’s just [in] winning mode. I’ve been here since July 2011, and I can see the core of players that they’re keeping here and building a team around. Bringing in guys like Barmie [Clint Barmes] and A.J. [Burnett] and some of those guys [with] veteran experience. The signing of Russell Martin was huge this year. But when you keep the core guys like Pedro [Alvarez] and [Neil] Walker and [Andrew] McCutchen, you see what they’re building around. The talent and the depth of this organization is amazing. I’ve been telling people it’s a really exciting time to be a Pittsburgh Pirate.

You have an unusual side business for a ball player. What is Wild Pitch Marketing, and how does it fit into your baseball life?
[In light of] my injuries, I have a backup plan for life after baseball. I went to school for marketing. I started dabbling on the Internet, learning about social media and taking courses. I always wanted to have a marketing firm. I’m kind of building the blocks now, just like in the minor leagues. In my free moments, I talk to people and get some lessons and learn what it takes to run a successful business and company online — which is pretty in-depth.

You mentioned social media. You’re pretty active on Twitter (@GrillCheese49). Why is that interaction a priority for you?
It just shows you’re a real person. You can’t get to all the fans, [but] they want to get up close and personal. I try to reach out, especially to the kids.

Who’s the best tweeter on the team?
I used to tweet the most — but [Mark] Melancon, he’s a newbie, and sometimes when you have a new toy … [laughs] A.J.’s pretty good, and I know he tweets a lot. Twitter is funny because it’s all about how you feel that day. I try to put something [out there] that’s of substance. But [with] a lot of followers, I can’t answer everybody’s questions, you know? I’d be on there all day.

What do you think of the entrance video they play for you at PNC Park?
I picked the song. [“Whipping” by Pearl Jam] I love it. They made me look pretty dominant, so I like it. And there’s a little humor in there, too, with the grilled cheese stuff. So if that’s what people gravitate toward, and that’s where some of my identity lies, then it’s working. It’s working, I’ll just say that.

Your strikeout rate spiked throughout the last two seasons. How do you explain the boost?
Being aggressive. I guess the title of my book would be Behind the Fist Pump [because] there’s a lot behind it. I’m not showing you up — I’m just fired up. I’m out to get you. I’m out to win. But [it’s] everything that I’ve been through, too.

What are you thinking as you leave the bullpen and head for the mound?
I know that I’m not going to do it passively. If I’m going to get beat, I’d rather a guy beat me with a 600-foot blast than a guy hitting a squibber off me. I’m going to be aggressive, and that’s the way it is. If I’m getting ahead, I’m getting you out.

This article appears in the July 2013 issue of Pittsburgh Magazine.
Categories: From the Magazine, Hot Reads, Pirates