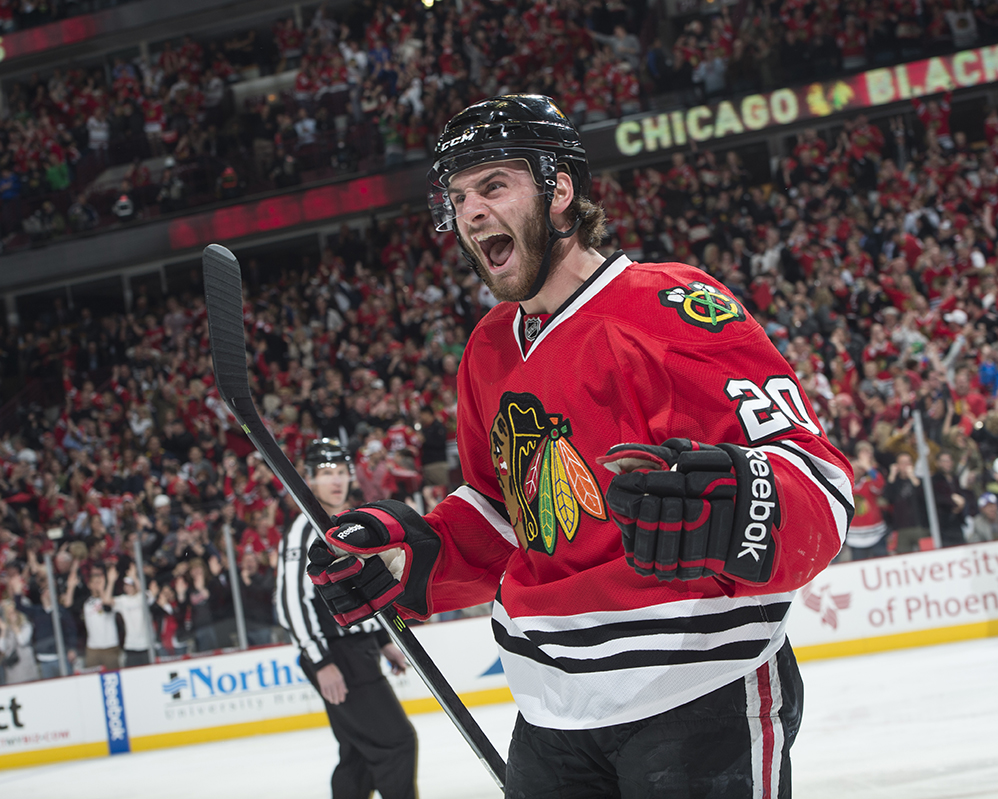 Photo courtesy of the Chicago Blackhawks

This winter, more than 14,500 kids across western Pennsylvania experienced some variation of the same nightmare: At 4:30 a.m., their alarms went bonkers. Outside, nothing but misery awaited. Bitter cold and snow-encased SUVs. Worse yet, it was a Saturday. All of their friends had lazy mornings of cartoons and Xbox ahead of them; no such luck for hockey-obsessed youth across Pittsburgh. The best they could hope for was that the heaters would kick into high gear before they arrived at the rink.

Upon decamping to a locker room and slapping on wet and strange-smelling armor, their only reward would be the deep crunch of steel into a pristine sheet of glass in a perfectly silent rink at 5 a.m.

Why do this? Why not pull the sheets over your head?

Why not play baseball?

Because these 14,500 lunatics all are dreaming of becoming the next Brandon Saad. Last year at age 20, during his rookie season with the Chicago Blackhawks, he became the first Pittsburgh-born and -trained player to lift the Stanley Cup over his head. As did so many other Pittsburgh hockey diehards, Saad, who grew up in Gibsonia, packed his gear bag before dawn to play Pee Wee hockey for the Butler Valley Dawgs. He dodged the turquoise paint chips that peeled from the roof of the North Hills’ Ice Connection. He pulled on soggy socks in the glorified meat locker of the Rostraver Ice Garden. Later, he would play for the Pittsburgh Hornets and the Mahoning Valley Phantoms in Youngtown, Ohio, where he was the North American Hockey League’s rookie of the year in 2009.

“I’m sure there were a bunch of people who thought my dream was crazy,” says Saad, who as a high-school freshman led the Pine-Richland varsity team to a Penguins Cup championship. He played for two years at Pine-Richland before leaving home to play in the Ontario Hockey League. “Being from Pittsburgh, it doesn’t happen often, but you just want to be that next kid to do it.”

PM spoke with Saad as the Blackhawks geared up to defend their Cup in the 2014 playoffs.

I feel incredibly old right now. I just realized that you grew up watching Sidney Crosby instead of Mario Lemieux.
Well, obviously, I knew a little bit about Lemieux and [Jaromir] Jagr, but [the Pittsburgh Penguins] had just come off their second Stanley Cup the year I was born. When Crosby and [Evgeni] Malkin came to the Penguins, I was just starting high school, I think — and this city’s hockey culture just kept getting bigger and bigger.

So whose poster did you have on your wall — Dick Tärnström?
I think Jagr at the time. Obviously, Lemieux was a legend, and he’d done a lot for the city and was a tremendous player, but I looked up to both of them.

Is that what inspired you to grow a mullet for the 2013 playoffs?
Actually, that was just a bonus. [Teammate Patrick Kane] did it, and then he ended up talking me into doing it, too. The history of Jagr’s mullet was definitely an inspiration for the flow. Ours was shaved on the side, though, so it was like an updated version.

It had to be a surreal experience to line up against Jagr for the first time.
Absolutely. It’s crazy to see him still breaking records and actually having a lot of success at his age. He’s someone I watched in awe when I was a kid going to games at the Igloo, and it was a pretty awesome experience to go up against him. He’s a legend.

When did you first start skating?
Actually, the Cup was a big part of it. My older brother and I first were on the rink skating . . . well, trying to skate, when I was around 2 years old. I fell in love with it, and that’s all I ever wanted to do.

Which rinks did you tear up in Pee Wee? It’s a small hockey world in Pittsburgh.
The Ice Connection was the first rink I ever went to. Then I hit just about every rink in town growing up. I mean, now the city has really grown, and [there are] a lot more rinks, but back then getting ice was tough. Getting up early — the 5 a.m. skates. Those were rough.

Non-hockey people don’t understand the sacrifice involved for the whole family — the travel tournaments, the fast-food dinners, the 4 a.m. alarms.
For sure. You really go through the wringer with hockey. But you love it, so you just make it happen. I have to thank my parents for that. Mom took me to a lot of early practices. But you look back on those times, and you realize that you’re blessed because [with all of] the hotels and the long drives, those are really special bonding moments that you’ll never forget.

What would you tell a 10-year-old hockey player reading this article right now? What’s the secret to being the next Brandon Saad?
There’s a lot of hard work and sacrifice — and I think you could even say luck — that goes into it. But honestly, I think the key is to just keep having fun with it. Hockey can be grueling at times, and the pressure can be a headache sometimes, but if you’re having fun with it, none of it really seems like hard work. If you love the game, keep loving it. Chase your dreams. Ignore the other stuff.

What’s your essential to-do list when you make it back to Pittsburgh?
Primanti’s is pretty high on the list. The old “Pitts-burger” sandwich is a favorite. The Pirates haven’t been good pretty much since the year I was born, so now that they’re turning things around, I like to get out to PNC Park and enjoy the sunshine.

You’re known for your gritty two-way play, but your roommate Andrew Shaw might have bragging rights forever. After taking a puck to the face, he came back in the game and raised the Stanley Cup with a purple face.
You know what? We had two great years rooming together, but some young guys came up from the minors and so Shaw got bumped to another room. Sad.

Now that you’ve played against Sidney Crosby, can you confirm that he’s the best hockey player on Earth, or will Jonathan Toews be mad at you?
Oh, I don’t know if I can confirm that. He’s a special player. Toews is special, too. That’s all I’m going to say about that. [Laughing]

This article appears in the June 2014 issue of Pittsburgh Magazine.
Categories: From the Magazine, Sports