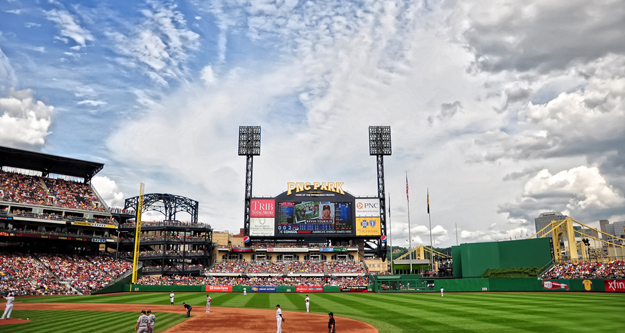 Whenever the Pirates clinch a losing season, I tend to go searching for a bit of perspective to remind myself just how long their losing streak has been intact. Here's what I came up with for the Pirates 19th consecutive losing season in 2011: the 2011 Pirates are now as far removed from the last winning Pirate team—the 1992 Buccos—as the '92 Pirates were from the 1973 Pirates. The 1973 Pirates were the first edition to take the field after the tragic death of Roberto Clemente. In broader (and slightly rougher) terms, Andrew McCutchen is as far removed from Barry Bonds as Barry Bonds was from Roberto Clemente.

As someone born after the Pirates' last World Series title, this is staggering to consider. When I was growing up as a Pirates fan in the early ’90s, there was a VHS tape that I watched basically on repeat for a year about the first 100 years of team history—from the Pittsburgh Alleghenys to Honus Wagner to Pie Traynor to Ralph Kiner to Clemente to Willie Stargell to the sad 1980s Pirates. The video ended with Barry Bonds and Andy Van Slyke, promising better days ahead. To me, everyone in that video was a historical figure except the people at the very end. Now, those players I grew up with are very much historical figures to young Pirates fans growing up today.

Think of all the things that happened between 1974 and Sid Bream's slide. The Pirates won the National League East in 1974 and 1975, but failed to get to the World Series. They finished third in the East three years in a row after that, then won the World Series in 1979. Willie Stargell retired and was elected to the Hall of Fame. The Pirates struggled badly in the early 1980s, but then hired general manager Syd Thrift in 1985. Thrift made a whirlwind of moves between ’85 and ’88 that set the foundation for the club's return to prominence in 1990. Between 1990 and 1992, they won three more division titles and lost three heart-breaking playoff series.

In total, that's six playoff appearances and a World Series in 19 years, and one very successful rebuilding project. It’s not exactly the 1940s Yankees, but it’s a solid run that many franchises would kill for. Teams like the present Pittsburgh Pirates.

Here's what's happened since the Pirates' 1992 season ended in heartbreak: GM Ted Simmons resigned during the 1992 season, leaving Cam Bonifay to oversee the project to rebuild the club in the wake of the departures of Bonds, Bobby Bonilla, and Doug Drabek. The Pirates weren't completely terrible between 1993 and 1996, but the Orlando Merced/Jay Bell/Jeff King/Carlos Garcia/Denny Neagle Pirates were far from successful and so the Bucs cleaned house as that contingent neared free agency.

With Kevin McClatchy assuming ownership in 1996, he and Bonifay declared that they would be instituting a five-year plan to have the Pirates competitive by the time PNC Park opened in 2001. Except for decent runs in 1997 and 1999, this plan failed miserably. PNC Park opened on the day that Willie Stargell died and the Pirates christened it with their first 100-loss season since 1985. Bonifay was fired part way through the season and Dave Littlefield took the reins. Littlefield's tenure never even got off of the ground and he'll be best remembered for making one of the worst trades of the aughts, the deal that sent Aramis Ramirez and Kenny Lofton to the Cubs for a handful of beans that no one thought was magical, even in 2003.

Littlefield was fired and McClatchy was pushed out in 2007 and since then we've been in the Neal Huntington/Frank Coonelly era, which has seen a strengthening of the minor league system but precious little in the way of Major League results.

In total, that's zero winning seasons, zero playoff appearances, three failed rebuilding efforts, and one rebuild that the jury's still out on. The 1973-1992 Pirates look like the Dream Team in comparison.

In fact, besides the current World Series drought (32 years and counting), the Pirates have only had one stretch in franchise history in which they went longer than 19 years between World Series. That was between 1925 and 1960, a stretch that contained the only era in modern Pirate history even arguably worse than the one we're in now, nine losing seasons from 1949-1957 that included three straight 100-loss seasons (’52-’54).

It's unfair to lump the whole of the last 19 years on anyone involved with the current Pirates or the way they're run. Since 2007, they've been working on a long-term plan to change the franchise's fortunes that's different than anything that's been attempted since the losing streak started. But they haven't turned things around yet, and so the brunt of this unprecedented losing streak falls on the only thing that the current Pirates really have in common with the 1992 Pirates: the fans. That's why it was so exciting to see the Pirates hang in contention through the end of July, and that's why 2011 feels worse than 2010, even if the record is a better.