After Dark gets a sneak peak at some of the under-the-radar gems of this year's festival. 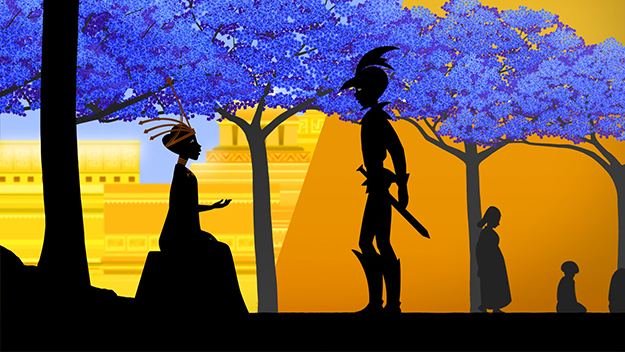 Photo from Michel Ocelot's Tales of the Night

If the long, detailed program for the Three Rivers Film Festival is any indication, it seems that many people are approaching the yearly fest all wrong.

There’s certainly nothing wrong with checking for highlights and special events, noting beloved directors and pedigreed films and marking them as must-see. However, it’s better to approach a Film Fest as diverse and engaging as ours like a ongoing destination, rather than a series of discrete events. To be plain: don’t worry about what’s playing. Pick the nights you can make it out to the theaters — ideally, many nights — and just go.

To aid you in breaking ties, though, After Dark was given a sneak peak at some of the under-the-radar gems in this year’s festival. None of the following screen on opening night — that honor is reserved for David O. Russell’s highly anticipated Silver Linings Playbook, the Marion Cotillard vehicle Rust and Bone and off-the-wall music doc Beware of Mr. Baker — rather, they’re among the more than 50 films that will vie for your attention throughout the two weeks of the festival proper. Consider the following capsule reviews a nudge for or against each. But again, the important thing: go to the Harris, or the Melwood Screening Room, or Regent Square Theater and buy a ticket. The festival is the thing.

Among the films I’ve screened so far, the drama Compliance affixed itself most firmly in my mind, for better and worse. It’s sure to outrage some audience members, particularly those who are unaware that it’s taken more or less verbatim from real life. For nearly a decade, a series of malicious prank calls was made to fast-food restaurants and other businesses nationwide; the caller would identify himself as a police officer, usually accusing a young female employee of a theft, eventually instructing management to inspect — and eventually strip search — the woman. The shocking truth is that in nearly every case, management agreed. The film follows the real events closely, focusing on the most extreme of the incidents (and the one that led to an arrest, if not a conviction.) It’s disturbing and very difficult to watch (thanks in large part to a gut-wrenching performance by Dreama Walker as the victimized employee), but an essential commentary on the nature of control and obedience. Compliance is only for hardened audiences, but if you can take it, it’s more than worth it.

Less harrowing — but just as memorable — is the masterful work of animation from French autuer Michel Ocelot, Tales of the Night. Two teens and an old man meet nightly at an abandoned cinema to dream up movies, culling plots from history, fairy tales and imagination; the results are beautifully rendered in a unique style, placing characters and objects in all-black silhouette against vivid and colorful backgrounds. The visuals are as enchanting as the stories, which will appeal to any grown-up with a love of children’s tales and fables. (While particularly mature kids would probably enjoy the film, it may be too rhythmically distinct from American animation to capture the attention of younger audiences in general — and one of the tales, while not graphic in any way, is bleak enough to upset some young ones.) Animation aficionados shouldn’t miss this one.

The Comedy ranks among the most buzzed-about films coming out of Sundance. Starring Tim Heidecker (of Adult Swim’s “Tim and Eric Awesome Show, Great Job”) as a driftless, moneyed hipster engaging in random acts of cruelty in Williamsburg, the film is a stinging indictment of irony and the lack of sincerity pervasive among affected young men. It’s also an exploration of the use of humor in communication, though it’s certainly not often funny. It is, however, a very careful and deliberate piece of art, and could serve as a wake-up call to fans of Heidecker (and his normal compatriot, Eric Wareheim, also in the film,) who wander in. A tough one, but ultimately rewarding.

I can’t recommend the bewilderingly lauded documentary Leviathan, which takes a harsh look at commercial fishing. While some critics are numbering it among the best docs of the year, I found it nearly unwatchable; operating without narration or even progression, the filmmakers distribute small, waterproof cameras throughout a giant commercial fishing vessel, and present the images and sounds they capture. Ideally, this reveals something about the relationship between the boat, the sea, the men and the creatures they catch; practically, it involves interminable minutes spent staring at a writhing mass of dead and dying fish. (Or, worse yet, a seven-minute sequence spent watching the captain wordlessly staring at a television.) I get what they’re trying to do, but there’s no reason to watch it. One can’t help but realize: even under the most artful of circumstances, life is not long enough to stare at dead fish for 85 minutes.

So I’ll close by giving a ringing endorsement to another documentary, the photography study Gregory Crewdson: Brief Encounters. The acclaimed photographer, known for creating elaborate, cinematic scenes with a full production crew for each photograph he takes, is a compelling and engaging figure; watching the hours of labor and obsessive attention to minute details enhances the looks we get at the finished works (like any good art doc should.) Art and photography fans should make a beeline; anyone with an appreciation for engaging documentaries should do the same.