For this pre-holiday weekend, I’ve got a trio of picks: One each for music, comedy and just plain drinkin’. 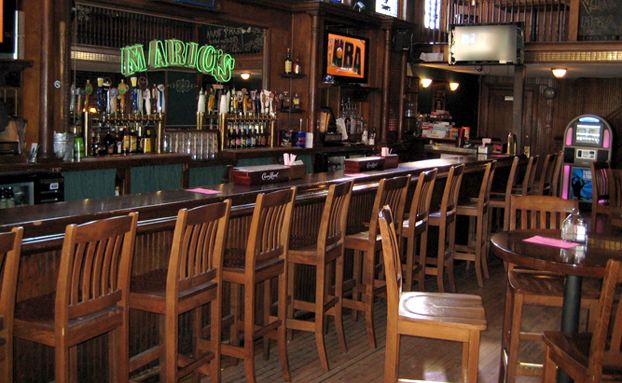 Don’t let the empty bar stools fool you: Mario’s, located on East Carson Street in the South Side, gets packed to the rafters on weekends.

Your inclination this weekend is most likely to veg and save up energy for the turkey consumption ahead, with the promise of a four-day break serving as an enticing option for nights on the town. While I am all in favor of weekends spent on the couch, I most strongly recommend heading out of the house this weekend. Just about everyone will be counting down to the holiday, so you’re pretty likely to have the place—whatever that place might be—to yourself.

So, for this pre-holiday weekend, I’ve got a trio of picks: One each for music, comedy and just plain drinkin’. If you need an extra bit of motivation, it’s not supposed to snow much. Get out of the house while you still can.

FRIDAY: DRINKS AT MARIO’S ON THE SOUTH SIDE
I spent most of October doing ghost tours for Haunted Pittsburgh Tours (yes, that was a shameless bit of cross-promotion), and among my duties was the South Side Haunted Pub Crawl. Plenty of bars to choose from, but I had to find establishments that, first and foremost, could fit 30 or so people in a place where they could actually hear me talk, and secondly, might possibly have some ghosts hanging around. Mario’s quickly proved to be the spot for this. Along with ghostly rumblings (the Sci-Fi Channel ranked them as one of the most haunted places in Pittsburgh, owing to strange-goings on in the former apartment on the fourth floor), the place is notable for great food, a good beer selection, a sports-bar atmosphere and at least half a dozen different levels to hang out on—different floors, private-ish areas, seating areas, bar areas, you name it. Take a big group and feel like you rented the place out. (Mario’s South Side Saloon, 1510-1514 E Carson Street, South Side. Info: 412/381-5610, mariospgh.com)

SATURDAY: JOY IKE AT CLUB CAFE, SOUTH SIDE
Joy Ike will be busy this Saturday. She’ll kick off the night as part of one of the mainstage concerts presented by the Calliope Folk Music Society over at Carnegie Lecture Hall, then hop over the river into the South Side for a gig at Club Cafe. That venue is something of a contradiction: It’s a nice place to hang out, and the drinks are great, but most of the nights are dominated by music that’s frequently less than compelling, with pricey covers to boot. But if you only come to this corner of Carson once this year, it should be for Joy Ike. Her sound, a very bluesy soul with serious pop melodies and passionate performance, is like nothing else in the Pittsburgh scene. She’s joined by JD Eicher and Kurt Scobie, all for a pleasantly inexpensive $7. Plan to bring extra cash—you’ll be buying her CD. (Joy Ike, JD Eicher, and Kurt Scobie, Saturday, November 20, 10 PM. $7. Club Cafe, 56-58 S 12th Street, South Side. Info: 412/431-4950, clubcafelive.com)

SUNDAY: LADIES OF LAUGHTER AT THE IMPROV, THE WATERFRONT
Even in 2010, the ratio of male to female comics hasn’t improved much. Even at an overcrowded open-mic night, you’re lucky to find more than one woman among the lineup, which is truly a shame; I’d trade a few of the generic shock-and-yell comics that hang around for a more diverse scene any day. So a lineup exclusively with female performers is a rare thing. The first show under the Ladies of Laughter banner was a fun, popular Mother’s Day bash, so the Improv decided to schedule a second installment. This one’s headlined by local veteran Lisa Dapprich, one of those comics who is just inherently funny no matter what she’s saying. She’s joined by Sharon Daly, Miss Gayle, and Chris Kemp, who I once saw completely win over an apathetic Funny Bone audience with an endless string of dirty-old-lady jokes. (Ladies of Laughter, Sun., Nov. 21, 7 p.m. $10. Pittsburgh Improv, 166 East Bridge Street, Homestead. Info: 412/462-5233, http://www.improv.com/ComedyClub/Pittsburgh)