A pair of headlines, both involving mask use, emerged from the Penguins’ return to hosting live audience members.

We just had to say this again…

Thanks for the continued support, Penguins fans.

We can’t wait to see you tomorrow night. pic.twitter.com/f3KGjhHWR0

The Pittsburgh Penguins have become the first of the city’s professional sports teams to welcome fans since the beginning of the COVID-19 pandemic. But a pair of stories emerged highlighting a continued point of contention: proper mask usage at games.

The Penguins have reopened PPG Paints Arena at 15% capacity. Among the health and safety regulations in place: All guests above the age of 2 must wear a mask at all times, except when actively eating and drinking.

Masks must be worn over the nose and mouth (wearing a mask that does not cover the nose offers no protection to either the wearer or others) and garments such as gaiters and bandanas, which have proven to be less effective than normal masks, are not permitted.

A photo of fans at Tuesday’s game, retweeted by team social media accounts, was digitally altered to depict proper mask usage. The team later apologized for the change, saying that fan photos should not be doctored, whatever the reason. According to the Pittsburgh Post-Gazette, three fans pictured in the photo were not properly wearing masks.

While the return to live sports is rightfully prompting excitement among Pittsburgh sports fans, the Penguins’ observance of the mask policy reflects the continued state of the COVID-19 pandemic in Allegheny County. According to a New York Times survey of infection numbers and positive-test rates, individuals in the county remain at a “very high risk level” for contracting COVID-19. This status is down from the “extremely high risk” peak in mid-winter, but still higher than neighboring counties and other areas with fewer cases.

The guidelines, which were developed with the Johns Hopkins Bloomberg School of Public Health, say that, based on current rates of infection in Allegheny County, “Weddings, funerals, concerts, sporting events and other gatherings that bring multiple households together are places where COVID can spread easily.” 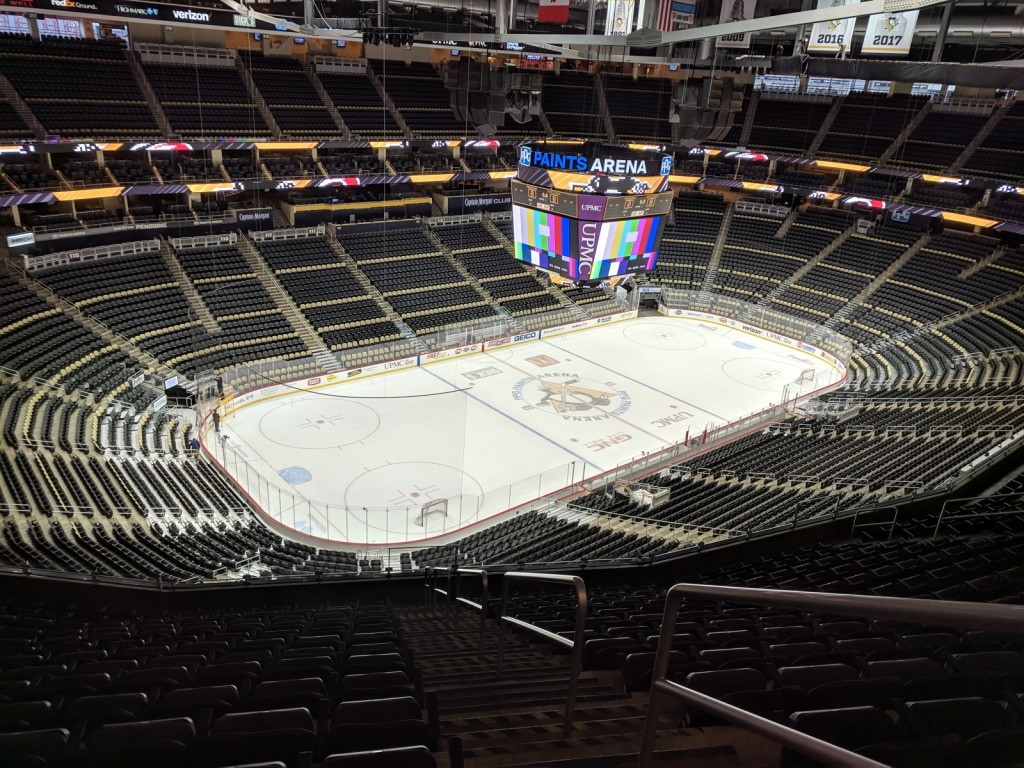 In addition to the mask requirements, several other important changes and protocols are in effect at PPG Paints Arena.

Ticketing for the arena is now mobile-only, with digital tickets displayed via ticketing apps or the Penguins’ website. No physical tickets, print-outs or screenshots will be accepted. (Fans without a digital ticket will be directed to the box office for assistance.)

Additionally, no bags — except approved medical and diaper bags — are permitted in the arena.

To better mitigate the flow of traffic in the concourses, the arena has added recommended entry times and gates to the “Know Before You Go” section on its website. In addition to better preparing the arena for COVID-19 safety, this guide has an added benefit: No waiting to get into the game.

And if you’re looking for more good news: At 15% capacity, parking should be a breeze.