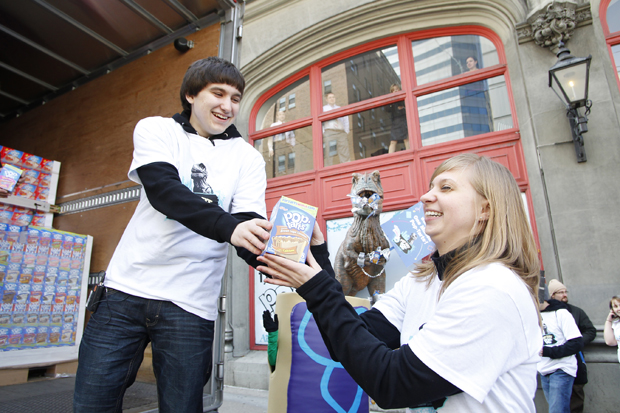 I love Pop-Tarts. I was in my late twenties when I decided that it was time to stop eating Pop-Tarts—time to grow up and eat a big-girl breakfast with fiber or extra calcium or something.

One day later, I bought a fresh box of Pop-Tarts. Their siren song is too strong.

Even though I just wrote Pop-Tarts four times, this post is actually not a paid advertisement for Pop-Tarts.

It’s a post about a student at the Art Institute of Pittsburgh who entered a Kellogg’s-sponsored contest—Pop It Forward, for one million Pop-Tarts, and won.

In answering the question "What would you do with one million Pop-Tarts," AIP student Tyler Kozar said he would create pop art using wrappers and boxes, and then would donate the pastries to local non-profits.

What resulted was the delivery of those one million Pop-Tarts to the Art Institute of Pittsburgh campus, after which, Tyler and his small team got to work creating the works of art that were unveiled recently at a show at the school’s gallery.

When I attended the show, I expected to like the artwork; I didn’t expect to like the pieces so much that I want to hang some of them in my house.

And now that I’ve successfully written the word "Pop-Tart" more times than I care to count, how strong is your craving for a Pop-Tart right now? (Those Kellogg’s people are marketing geniuses.)

If you’re running to the Iggle for Pop-Tarts, can I make a suggestion? Vanilla Milkshake Pop-Tarts. They have extra calcium in them, so technically, they’re still a big-girl breakfast.

Then, check out some of Tyler’s creations:

This article appears in the April 2011 issue of PittGirl.
Categories: PittGirl