Andy Warhol receives the musical treatment at City Theatre — but like the man himself, it’s anything but conventional. 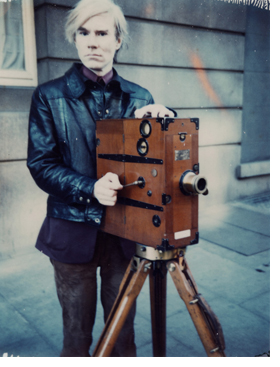 Many people have tried to portray Andy Warhol. In film, art, writing — and simply in spirit — the enigmatic, impossibly chic ’Burgh-born artist has been dissected and resurrected countless times, with varying results. Warhol was aloof and affected in many ways, and so cool that he told us what cool was for quite a long time — but how does that define him? Can he even be classified by anything other than his own work and words?

The fine folks at City Theatre probably won’t be answering all of those questions this month. But they are putting Warhol up on stage — and they’re going to make him sing and dance.

POP!, a new musical receiving its Pittsburgh premiere at the City, opens with Valerie Solanis’ 1968 attempt to assassinate the enigmatic artist. Solanis was an on-and-off denizen of The Factory, a mecca of pop-art creation established by Warhol as a Manhattan studio. Solanis, a radical feminist writer seeking a larger platform, was enraged at Warhol’s apathy toward a script she wrote (he refused to help produce it and misplaced the copy she gave him); she nearly succeeded in her attempt to kill him.

In real life, Warhol was rushed to the hospital and underwent life-saving surgery — but in POP!, he embarks on a personal whodunit, taking stock of the figures floating through his life. (While members of the audience know who shot Warhol, the character on stage does not.)  “It isn’t an art history lesson,” director Brad Rouse says.

“It’s going into his head the moment after the shooting. He sort of draws to the people who were in his life at that moment — to understand how it could’ve happened and what the consequences are to him. He tries to seek out not just who did it, but also who else could’ve done it and why.”

And while musicals are not part of the Warhol biography, introspection (at least following the shooting) most certainly is. Of the attack, Warhol mused, “Before I was shot, I always thought that I was more half-there than all-there — I always suspected that I was watching TV instead of living life. Right when I was shot — and ever since — I knew that I was watching television. The channels switch, but it's all television.”

That typically tough nugget of Warholian truth aside, POP!, written by Anna K. Jacobs (music) and Maggie-Kate Coleman (book and lyrics), is not an attempt to define the artist or provide a biography. “It’s a piece of pop art on its own,” Rouse says. As the madness unfolds, the larger-than-life occupants of The Factory are spotlighted. However, “the world of this play revolves around Andy. He spends a lot of it just watching,” says Rouse, “but he’s still the center of gravity.”

The difficult task of turning Warhol into the POP! interpretation of himself rests on the capable shoulders of Anthony Rapp, who will make yet another return to the City. Rapp, best known for his starring role in the musical Rent, has made the South Side theater a home away from home; he starred in City’s now-legendary production of Hedwig and the Angry Inch (also directed by Rouse), as well as productions of his brother Adam Rapp’s Gompers and his own one-man show, Anthony Rapp’s “Without You.”

“He’s a dear friend and a great collaborator,” Rouse says. “And he has an incredible emotional depth of skill. There’s really nobody who could do it better.”

Adding to the all-star team behind POP! (and, for that matter, the local ties), Billy Porter, a Carnegie Mellon grad and Broadway powerhouse, will choreograph the show.

There’s a certain degree of renewed relevance in exploring Warhol in the year 2012. In the age of reality TV, YouTube and viral everything, pop culture seems more Warholian than it ever has; it seems that anyone who tries can indeed “be world famous for 15 minutes.” Perhaps POP! can encourage audiences to take another look at Warhol, as the authors have — and as the character does, while the gunshot echoes in his mind.

But those looking for new truths, dynamic insight or good old-fashioned musical theater earnestness should check their expectations at the door. Rouse is quick to stress that this show defies convention and will challenge anyone who sees it.

“With POP!, all that is thrown out the window,” he says. “It’s more transformational — it disorients the audience. It takes them on a very different kind of ride. There’s no show that I’ve seen that unfolds like this one does; it’s more of an experience than a musical.”