A familiar scene: a few kids playing pick-up football in a parking lot, one team huddled around the “designated quarterback” as he diagrams plays in invisible hieroglyphics on the pavement.

Only this “all-time Q” has magnificently long, shimmering, healthy hair and a peculiar last name…. 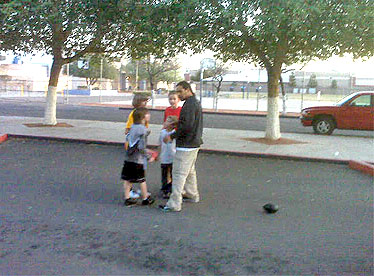 Steelers safety Troy Polamalu’s humility and uncommon character were wonderfully documented in Pittsburgh Magazine’s sit-down with him in August. But perhaps there is no better example of Polamalu the Man than what happened this week at a gymnasium in Arizona.

According to a report from azcentral.com, Polamalu was watching his niece’s volleyball team play in a tournament near Phoenix when 10-year-old Camden Leiva, who was dragged along to watch his sister's game, recognized the quiet Samoan sitting in the bleachers.

“My son has seen the Head & Shoulders commercials,” [Camden’s father Jeff Leiva] explained. “But he had his hair pulled back tighter than you normally see on television."

When Polamalu made a trip to the snack shack, Camden followed and asked for a picture with The Mane Man. His friends soon knew something was up, and a crowd formed. Most NFL players would have pulled out their cell phone or headed for the restroom to escape the mob. Not Troy.

"He sat there for like 20 people, taking pictures, signing things," Jeff said. "Some guys will charge you for that stuff. But he signed everything from shirts to napkins."

Even the saintliest NFL role model would have stopped there. But not Troy. Instead, the five-time Pro Bowler followed the kids to the parking lot for a game of two-hand touch.

It wasn’t just a photo-op. Polamalu played QB until one of the teams reached 8 touchdowns.

"He told us a bunch of plays in the huddle. He told me to run a fly route," Camden said. "And I caught it for a touchdown."

How long will that kid remember the feeling of that pass hitting his hands? Infinity?

In this weird world of party-hardy place kickers, sore losers, and general nincompoops, it is reassuring to know that there are still some real heroes—no, scratch that—real human beings out there.

Click here to read the full article from azcentral.com.