'Requited,' an authentic Western by seniors Mark Christian and Madeline Puzzo, is one of nine finalists. 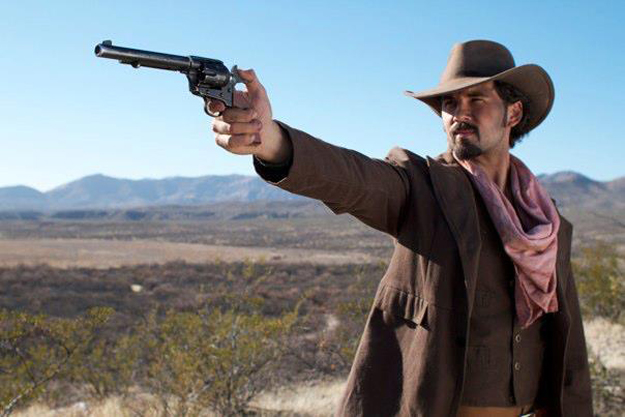 Point Park Students' Film Finalist for Award
When you think college students and movies, your head likely fills with images of the throngs that turned out (many in full costume) for the record-breaking Avengers premiere last weekend. While it may be true that most college students are movie-goers, a group from Point Park was recently recognized for its work in movie-making.

Requited, a film produced by Point Park seniors Mark Christian and Madeline Puzzo, was recently announced as a finalist for the 2012 Student Academy Awards by the Academy of Motion Picture Arts and Sciences.

The flick, an authentic Western, was filmed on location in Gammons Gulch in Benson, Ariz., and Old Bedford Village in Bedford, Pa., with the help of a 20-person crew (many of whom were Point Park students) and a 12-person cast.

In addition to being recognized by the Academy, Requited was also selected for Point Park’s 2012 showcase screening, which will give Christian and Puzzo the opportunity to go to LA and promote the film to industry professionals and Point Park alumni.

Chatham Examines Environmentalist's Legacy
Environmental issues have quickly risen to prominence throughout the past few decades — not just in this country, but also around the world. Now, Chatham University will bring together more than 25 environmental leaders from all over the globe to honor one of the people who sparked the modern environmental movement: Rachel Carson.

The Perspectives on Silent Spring at 50 Symposium, a two-day event, will begin Friday and is being held to recognize the impact of Carson’s most famous work, Silent Spring; the book detailed the dangers of DDT, which was a widely used pesticide at the time.

“Rachel Carson left a legacy of writing and an environmental ethic drawn from her concern about the persistent chemicals people introduce into the environment,” says Patricia DeMarco, director of the Rachel Carson Institute at Chatham. “We will examine the predictions Rachel Carson made in her writing, evaluate how the current environmental conditions reflect her concerns, and address the challenges and hopes we face in the 21st century.”

W&J Unveils Energy Index
Washington & Jefferson College has revealed a new tool aimed at measuring the country's energy dependence. The Washington and Jefferson College Energy Index was unveiled last week, coinciding with the opening of the college’s Center for Energy Policy and Management (CEPM), which is intended to facilitate the exchange of ideas and information through discourse and debate.

The index is the brainchild of economists Robert Dunn, Ph.D., and Leslie Dunn, Ph.D. It measures energy independence through a system based on data pertaining to consumption, type of fuel, geography and history.

This article appears in the May 2012 issue of Great Minds.
Categories: Great Minds