The Center for African American Poetry & Poetics aims to advance and support African-American writers and thinkers in a university setting. 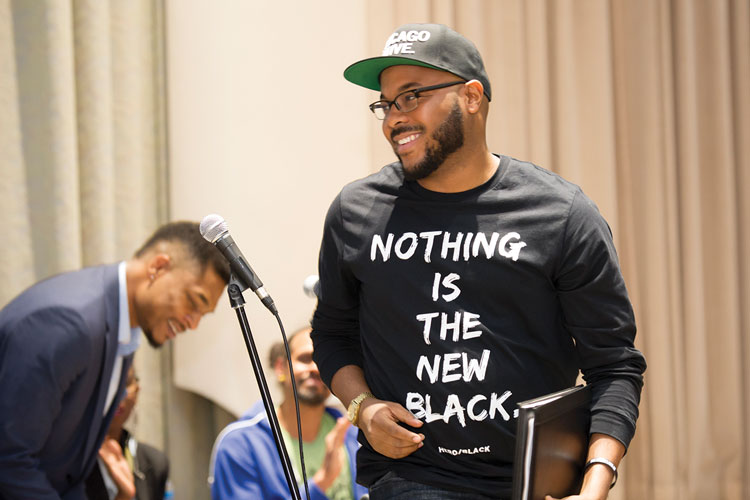 As the birthplace of August Wilson, Gertrude Stein, Andy Warhol and many other artists, Pittsburgh long has been a breeding ground for creative thinkers.

Now, decades after those forebears left their legacy, a new generation of artists and academics continues to strengthen the city’s literary and artistic traditions at the new Center for African American Poetry & Poetics, which has been hosting lectures, workshops and other events since its opening this spring.

​CAAPP was formed after Don Bialostosky, the English Department Chair at the University of Pittsburgh, called a meeting in spring 2015 with poets and professors Dawn Lundy Martin, Terrance Hayes and Yona Harvey. Their goal: to develop a way to highlight the graduate faculty specializing in African-American poetry at the University.

“All three are not just makers of poetry but people who are thinking about poetic practice, poetic theory, the place of poetry in the world right now and poetics as they understand it,” says Bialostosky.

After some brainstorming, Lundy Martin suggested the idea of a center that would bring together poets and academics with a focus on African-American poetry. For the past year, Lundy Martin and Hayes, the co-directors of the center, have been planning ideas for programs and workshops.

Its official mission statement describes the center as a “creative think tank” for African-American and African diasporic works. Organizers say it will be the first of its kind in the nation, providing a space for local and national African-American poets and artists to collaborate and discuss.

It’s also a step toward cementing the university’s role as the top choice for students seeking a master of fine arts degree who are looking to write in and study the African-American poetic tradition, says Lundy Martin.

During one of the center’s first events in March, a panel discussion entitled “Poetry and Race in America,” three generations of African-American poets gathered to discuss the relationship between race and poetry in America. An eager audience filled the Frick Fine Arts Auditorium for that event, at which the Pittsburgh Foundation President and CEO Maxwell King announced the inauguration of The Ed Ochester Lectureship on African American Poetry and Poetics. The lecture series through the center honors the long-time editor of the Pitt Poetry Series at the University of Pittsburgh Press. Along with this lectureship, the center will sponsor residencies and short- and long-term fellowships for artists and scholars of African-American poetry and poetics.

The center’s hub is located on the fourth floor of the Cathedral of Learning. It houses administrative offices along with the center’s Dream Space, where visiting guests can meet and work with other artists.

More than just a place for collaboration between writers, the center will enable programming that considers the interests of students and the general Pittsburgh community. One of the organizers’ five-year goals is to have a separate space that is accessible to people outside the university, as well as a separate creative-writing center, says Lundy Martin.

Organizers particularly are eager to involve visiting writers with the community and in community spaces, such as the August Wilson Center for African American Culture Downtown, the Kelly Strayhorn Theater in East Liberty and City of Asylum in the North Side. The center also hosted workshops and speaking events throughout the summer.

Another goal of the center is to curate a comprehensive archive of African-American poetry and other related resources involving the special-collections department at the university, as well as multimedia content, says Lundy Martin.

“We want a place to look at and archive all the work that African-American poets are doing while considering what it means to have this work in the world,” she says.