From rich purple to pale green, this sweet and juicy stone fruit is a seasonal treasure.

Like the trees on which they grow that burst into snowballs of white blossoms each spring, plums are beautiful to behold. Their exteriors can be deep purple, dark red, inky blue or even pale yellow with interiors that run from crimson to rich amber. At peak ripeness, plums are so richly flavored, beautifully textured and juicy that it’s also virtually impossible to cook with them—the temptation to eat them is too strong.

Their fine qualities were first recognized in China, where sweet-sour plums are mentioned in Shih Ching (Book of Songs), one of the oldest Chinese texts, dating to approximately 600 B.C. In the ancient Arab world (present-day Iraq and Syria), plums were cultivated in vast orchards alongside apricots and cherries, and by the first century, Romans grew them as well. In England, medieval monasteries cultivated plums, but the fruit didn’t truly catch on in the British countryside or in France until the 17th and 18th centuries.

The fruit enjoyed at these different places and junctures in history would not have all tasted the same: As a group, plums offer more diversity than other stone fruits, such as peaches, cherries or apricots. Among the most luscious plums are those originating from ancient China but known to us as “Japanese plums” because Japan is where Western botanists first discovered them.

In 1885, a California plant breeder named Luther Burbank imported plum trees and created many new breeds. Among these was the Santa Rosa plum, a large, sweet, purple-red round fruit with golden flesh and rich perfume. The Santa Rosa, along with other Japanese plums, such as the Methley or the Shiro, has traveled far—today, these are among the most commonly grown types here in western Pennsylvania.

Also in our region, a few hardy growers still cultivate Damson plums, descendants of the first wild plums to grow in Europe and brought to the United States by settlers. These are small and intensely flavored plums, popular for making preserves and some types of brandy. The European plum, small, oval and purple, dries well and is most commonly used to make prunes. In western Pennsylvania, even those who grow very small amounts of a plum crop may cultivate upward of six or seven types—it’s that hard to choose among the many delicious varieties.

Mark your calendars: The local plum harvest starts in mid-July. Until then, you’ll find the fruit imported primarily from California, the dominant plum producer in the country, where peak season runs from May through August.

Recent research suggests that one plum contains about the same amount of healthful antioxidants as a handful of blueberries. 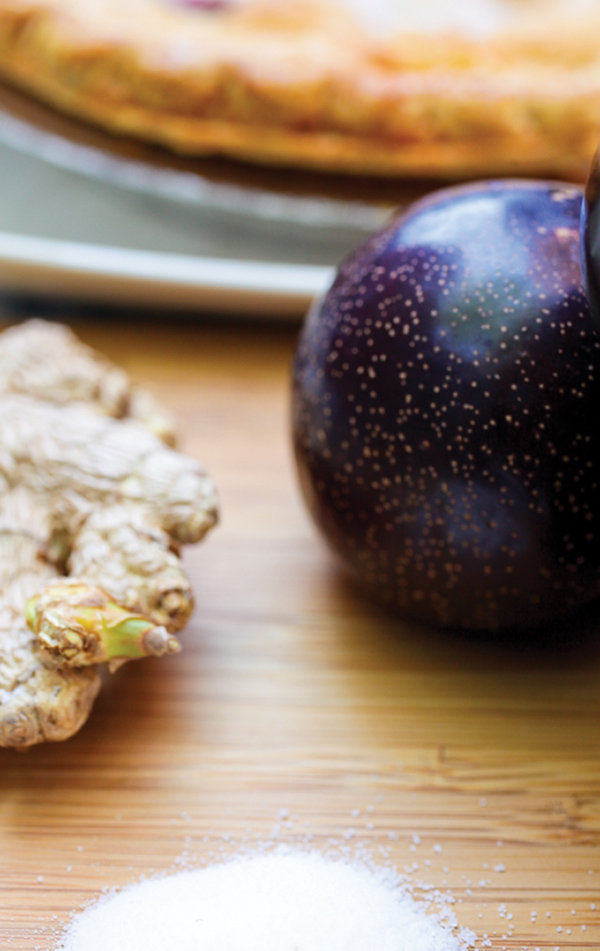 Local plum growers Curt and Jennifer Kaelin, of Kaelin Farms in Wexford, supplied this recipe, which layers fruit spiced with ginger and cinnamon over a buttery pastry crust.

For crust: Blend 1 1/4 cups of flour, 2 tablespoons of sugar and one-quarter teaspoon of salt in a food processor. Cut in 1 stick chilled unsalted butter cut into half-inch pieces until the mixture resembles coarse meal. Add 2 tablespoons ice water and mix until moist clumps form (add more water a teaspoon at a time if mixture is dry). Shape dough into disk; wrap in plastic and refrigerate 1 hour.

For fruit topping: Preheat oven to 400 degrees. After halving and pitting 1 1/2 pounds of plums, cut each half into 6 slices. Toss the plums with 4 tablespoons of sugar, one-half teaspoon ground ginger and one-quarter teaspoon ground cinnamon. Roll out dough on floured surface to make a 12-inch circle. Transfer to rimmed baking sheet.

Stir one-quarter cup of apricot preserves in a saucepan over low heat until melted. Brush over plums. Cool tart 1 hour on baking sheet; transfer to plate, serve at room temperature.

Plums, blackberries, raisins and purple grapes get their color from phytochemicals, beneficial substances found only in plants that may help your body fight disease and promote good health.

The pluot is a hybrid fruit—about three-quarters plum and one-quarter apricot—that combines the color and flavor of plums with the sweetness and texture of apricots. When ripe, pluots are lusciously full-flavored and delightfully void of the sour quality that plums can often possess. Look for pluots from mid-July through late summer in well-stocked produce sections and use them as you would plums.

For a fascinating look at the history and background of the pluot, check out The Perfect Fruit: Good Breeding, Bad Seeds and the Hunt for the Elusive Pluot, which freelance food writer Chip Brantley published last year to excellent reviews. Using the fruit as a starting point to explore the complicated and sometimes cut-throat stone-fruit industry of California’s San Joaquin Valley, his story will grip you with its tales of maverick plant breeders and family growers squeezed by a fickle marketplace and the unpredictable whims of nature. 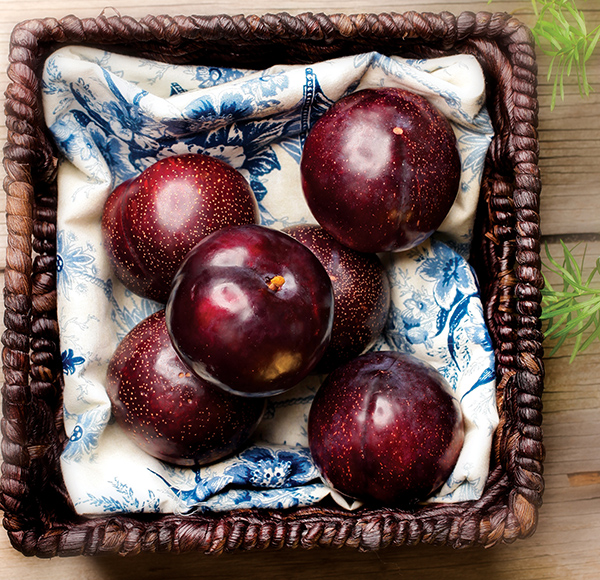 SHOP LOCAL
Curt Kaelin, of Kaelin Farms, who grows about a half-dozen plum varieties at his family’s orchards in Wexford, where the main crop is peaches, jokingly warns that there might not be much left once he finishes picking fruit. “When the plums are sweet, they’re the sweetest thing on the farm, so it’s a one-for-me, one-for-you kind of deal when I’m harvesting,” he says.

Kaelin’s favorite from the farm is the Methly, which ripens in mid-July; he’s been intrigued by demand for his small, tart Damson plums from locals who make their own slivovitz, a plum brandy that originated in the Balkans.

If you’re making a special trip to buy plums, be sure to call ahead and see what’s available. Local growers can’t count on great plums every year; late-spring frosts common in our region significantly reduce the crop once every three years or so.

ENJOYING PLUMS
Store plums at room temperature. Soften the fruit by storing it in a closed paper bag out of direct sunlight, but be sure to check it every day and eat it as soon as it’s ready. When ripe, plums will keep an extra few days in the refrigerator.

If you’re cooking with plums, keep in mind that many varieties have a cling-stone pit, which is difficult to remove. The best approach: Cut toward the center of the fruit using a small knife and remove the flesh from the pit in wedges.

Like peaches, plums soften and ripen after being picked, but they don’t gain sweetness. Until the local season begins, available plums may be shipped from California, one of the country’s largest producers, or other regions, such as the Northwest or Michigan.

Choose plums that are plump with a good color and aroma and that give to gentle pressure: If the fruit is rock-hard, it will never ripen properly. Avoid plums that have cuts in the skin or soft spots with discoloration.

This article appears in the June 2010 issue of Pittsburgh Magazine.
Categories: Eat + Drink Features, From the Magazine