After so much business-school bluster about managing the game, the Penguins have managed to get themselves into a quagmire. 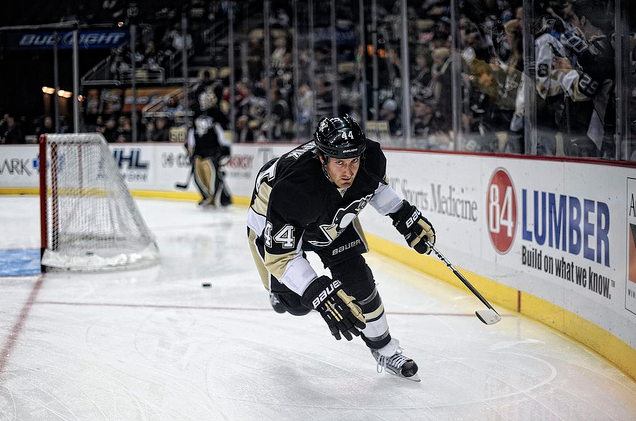 Oh, hells bells. They almost busted Sidney Crosby’s already-busted Chiclets. They put Marc-Andre Fleury in the fetal position, all topsy-turvy in the net like some kind of ensnared and very scared raccoon. They even ripped off Evgeni Malkin’s lucky chain as the final horn sounded.

As Mike Tyson famously said, "Everyone has a plan until they get punched in the mouth."

On Tuesday night in Long Island, the Pittsburgh Penguins were caught cold by a relentless New York Islanders forecheck. But they can't claim it was a sucker punch. For the past week, the Penguins players and coaching staff have sounded like a gaggle of brainwashed MBAs on a nightmarish corporate retreat. The doublespeak has been endless.

The entire city of Pittsburgh has been submerged in a sensory deprivation tank. Darkness all around. Sheer emptiness, except for the faint echo of mindnumbing neo-contemporary hockey rhetoric.

And yet it seems like as soon as the reporters leave the room and the puck drops, things go pear-shaped rather quickly, and people actually have the audacity to look surprised about this sudden calamity. As if this is not the Stanley Cup playoffs. As if this is not the violent, unhinged, unpredictable and sometimes downright incomprehensible game of hockey.

You can save yourself hours upon hours of talk radio bloviating and redundant analysis of the Penguins-Islanders series if you just shut out all of the white noise and focus on a simple concept. Because the deciding three games of this Looney Tunes series will come down to one thing.

If the Penguins continue to make lackadaisical, blind passes in critical areas of the ice, they will surely be sent packing in the first round of the playoffs for the third straight season. If they don't – for instance, if they muster the fortitude to drive the puck to the net or (gadzooks!) deep into the corners –  the Islanders have little chance of beating the Penguins two-out-of-three.

Those pining for 2-0 defensive clinics should resign themselves to the calamity. Enter the void, friend, because this series was destined to be high scoring from the jump. The Islanders scored the 7th most goals in the NHL this season, and have been more than happy to take a page out of the Philadelphia Flyers' bag of tricks and trade chances with the high-powered Penguins offense. Instead of sitting in a shell waiting for the knockout punch, the Islanders have learned from their tentativeness in Game 1. What’s the point of playing chess with the Penguins when you can simply play checkers, and win? The Islanders are playing without fear. When you play without fear, you get the lucky bounces.

Mike Tyson was knocked out for the first time in his career by Buster Douglas not because Douglas made the bout a chess match. Instead, he made it a backyard brawl. He did the previously unthinkable. The simplest thing of all. He punched Tyson in the mouth.

Some stray observations from the void:

Props to Dan Bylsma for succinctly providing the 2013 Penguins’ tombstone if they’re golfing by next week: “I don’t really think we need to talk about finishing chances,” Bylsma said in the presser. “We’ve scored plenty. That is not the problem.” Please let that also be the eulogy for the undying #Winger4Sid hashtag.

Almost as abhorrent as the Penguins' careless turnovers and errant passing has been the inability of the Penguins' vaunted centers to track back into the defensive zone and patrol the slot. Only Sidney Crosby has done this with any sort of regularity. Jussi Jokinen, Brandon Sutter and, most notably, Evgeni Malkin can usually be found gliding listlessly around the defensive zone, waiting for an outnumbered defenseman to win a puck battle so they can gallop majestically up the ice to score yet another goal, which, as Bylsma pointed out, is almost beside the point.

In Game 1, there was nary an Islander to be found in front of Marc Andre-Fleury. Now they're just hanging out in the crease browsing their Netflix queue. A truly bizarre turn of events.

The Penguins' breakout is broken. Frankly, it has been broken since 2012. They're relying on the long stretch pass from their defensemen to wingers who are camped way too far up the ice. The Penguins' best skaters – Malkin, Crosby and Jokinen – are all centers, and yet too often the centers are merely dummies in the breakout play. Even when the puck does make it successfully to a winger camped near the blue line (or sometimes even the red line), they're being quickly cut off by Islanders defensemen. Bylsma has to adapt his breakout, because the Islanders seem to know where the Penguins are going with the puck before the Penguins do. Instead of one pass out of the defensive zone, how about two? Call it a Defensive Zone Puck Transportation Business Plan and perhaps we'll see some initiative.

Malkin and James Neal are good buddies. Buddies are not afraid to piss each other off, which is why Malkin and Neal have such good chemistry together. Malkin is not afraid to take the initiative when Neal is on the ice with him. Too often in the past, Malkin has deferred to Crosby to a fault. Now it's happening again with Jarome Iginla on his wing. Malkin tries to find Iginla on every play, and it has led to some of his most egregious turnovers. When Malkin and Neal came down on a 2-on-1 rush last night, Geno looked off Neal and unleashed a ferocious wrister past Evgeni Nabokov. Had it been Iginla on the other end, Malkin would've almost certainly deferred.

Geno is a great guy, but he's unselfish to a fault. If Bylsma does not put honey badger Chris Kunitz alongside Malkin and move Iginla to Crosby's wing for the rest of this series, it will be an enormous mistake. Iginla looks lost playing out of position on Malkin's left wing.

Matt Niskanen needs to stop thinking so much, and Kris Letang needs to think a little more. Physically, their games are quite similar. Mentally, they couldn't be more different, for better or worse. If Niskanen is to be in the Penguins' long-term plans, he needs to start closing opponents down at the blue line with regularity.

Which brings me to my final point: Spacing. Tune in for a moment to any other playoff series, especially the Western Conference games, and note how much open space there is between the puck carrier and the closest opponent. Every other game looks like it's being played in a sandbox. The Penguins, however, have been leaving acres of space between themselves and the puck carrier. John Tavares' majestic game-tying goal in Game 4, as skillful as it was, simply cannot happen in the playoffs. That was regular season goal. If the Penguins don't get their focus back, and fast, they will be nothing but regular season champs once again.