Playoff Blog: Are You Experienced?

The rebuilt and refocused Penguins made a statement in Game 1 — They come not in peace. 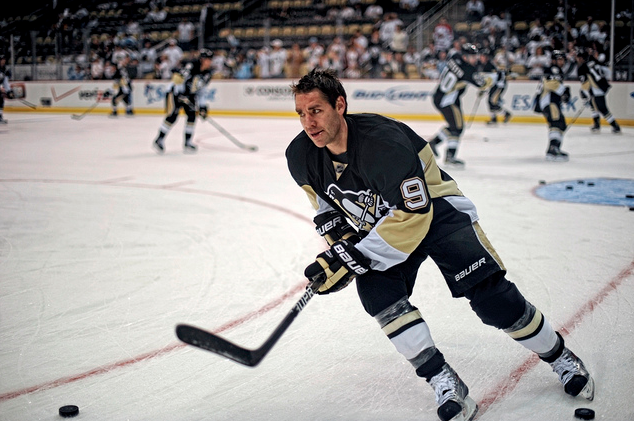 Somewhere, Ray Shero is lighting a cigar with a $100 bill of someone else's money. The fact that the Penguins dismantled the completely rudderless New York Islanders 5-0 in Game 1 isn't a shock. This opening game was not about the scoreboard. After all, the Penguins had taken 1-0 series leads against the Montreal Canadiens and Tampa Bay Lightning before crashing out unceremoniously in 2010 and 2011.

This was about the look.

One unremarkable moment said it all. Early in the third period, with the Penguins killing off the tail end of a penalty, Brenden Morrow took the puck deep into the Islanders’ zone and held off two defenders in the corner for upwards of 10 seconds, then sprinted back to the bench as if his life was on the line.

The Penguins were up five goals. The game was long over. But Morrow, the 34-year-old who was hilariously rumored to have “nothing left in the tank” when he was acquired from Dallas in March, was still churning his legs and pumping his arms through open ice like it was overtime. It was an almost absurd show of determination.

When I interviewed Ray Shero a few seasons ago, he spoke a lot about only wanting to acquire a very specific type of player. A leader. A positive presence in the locker room. A player who isn’t afraid to toil in the corners or plant himself in front of the crease. A player who wears bruises like a badge of honor.

Much has been made of the acquisition of Jarome Iginla, who made a very loud statement to the young Islanders about the reality of playoff hockey by giving Evgeni Nabokov a proverbial steel-chair shot (literally chipping off a piece of the goalie’s face mask with a slapshot). However, Shero's trade deadline hustle was really about addressing the team's nagging flaw. Penguins have sorely missed true “glue guys” since the departures of Rob Scuderi, Hal Gill and Max Talbot.

If Shero is the undisputed heavyweight champion of NHL general managing, it's not because he netted Iginla. That was, in truth, a relatively easy score. Every GM in the league had their eye on Iginla, and Iginla would only waive his no-trade clause to come to Pittsburgh. But nobody wanted 35-year-old Mark Eaton, who blocked eight shots last night. Few teams wanted bruising defenseman Douglas Murray, who has fit into the Penguins’ system flawlessly since coming over from San Jose, and who attempted to put Islanders forward Kyle Okposo in the Torture Rack last night (R.I.P. American hero Lex Luger). 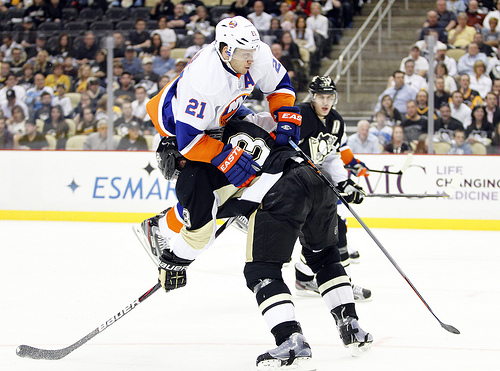 This is to say nothing of Jussi Jokinen, who was so unwanted in Carolina that the Hurricanes are currently paying part of his salary to be the Penguins' best faceoff man and a Finnish Army Knife of versatility (he contributed two assists last night and won 58 percent of his faceoffs).

How many white jerseys did you see in front of the Penguins’ net in Game 1? It was a barren wasteland, a Dothraki Sea, mainly because of the unflagging presence of Eaton and Murray — two guys who were assumed to be running on fumes before joining the Penguins. The pair has found success in Pittsburgh because they’re simply asked to be themselves. Murray, a dog off his leash; Eaton, a maddeningly consistent shadow.

The Penguins have fixed their defensive system by doing less, not more. Dan Bylsma has a bit of an unearned reputation for being strategically inflexible, so he should be given full marks for tweaking his system to play to the strengths of Eaton and Murray.

Murray is like post-contemporary art. His brilliance is in the negative space, or what's not there, or whatever. He's big.

In the end, Shero has wiped away all memories of the Penguins' Hindenburg disaster of the 2012 playoffs by bringing in five players who are exact models of what the Penguins look for in their locker room (Iginla, Morrow, Jokinen, Murray and Eaton). The cost? A few marginal draft picks and a defensive prospect (the front office preemptively hedged against this bet by stockpiling young defensemen in the Jordan Staal trade). It's almost laughable.

Altogether, the Penguins blocked 22 shots compared to the Islanders’ 12 in Game 1. This series was supposed to be a mismatch on paper. But with Sidney Crosby still sitting in the press box and Evgeni Malkin clearly still favoring his injured shoulder (take, for instance, his decision to pass to Beau Bennett on a 2-1 rush late in the third instead of rip a wide open slapshot), Game 1 was actually won by the foot soldiers. The Penguins’ glue guys owned the trenches, and after the glorified street hockey game that was the Penguins-Flyers playoff series, Shero must be happy to finally recognize his own creation again.

They have the look.