Play or Get Played: Why the James Harrison Hit Really Doesn't Matter

The NFL is thinking big when it should be thinking small. 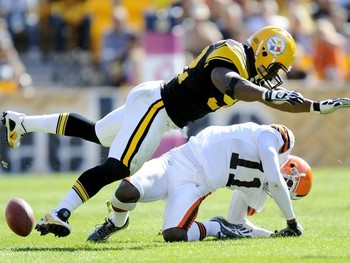 He hit him so hard that the birdies flying around Massaquoi’s head started chirping “Renegade.”

The two players were moving so fast that CBS cameras barely caught the ferocity of the collision on the instant replay.

It was vicious, deplorable, exciting. It was exactly the kind of hit we revere and watch 1,000,000 times on YouTube.

A lot of people have a problem with the hit, which ended up costing Harrison $75,000—more than most people make in a year. All of a sudden, 20,000 beat writers, talk show hosts and columnists across America became certified neurologists and televangelical moralists. 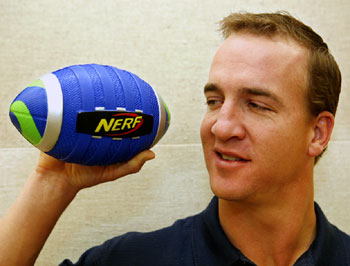 If some short-sighted media members had their way,
this is what the New NFL would look like.

The response has been typically brazen, trigger-happy and polarized: a uniquely American sign of the times. Reactions were either comically hawkish (“How Long Until We Start Playing Flag Football?”) or hopelessly pie-in-the-sky (“Players need to be ejected after delivering a big hit”).

Well guess what? None of it matters.

Why did former Steelers center Mike Webster live the later part of his tortured life sleeping in bus terminals—homeless, disoriented and alone?

Why did former Eagles big-hitter Andre Waters commit suicide at age 44, crippled with depression caused by irreparable damage to his brain tissue?

Why was John Mackey, perhaps the best tight end in the history of the game, committed to a nursing home at age 65 after bouts of dementia and rage?

Those heartbreaking stories have very little to do with the human car wrecks that we saw this past weekend. They are actually the byproduct of thousands of unspectacular fender benders: The unavoidable helmet-to-helmet, or even shoulder-to-shoulder collisions that happen during the 130-odd plays in a single game.

The most comprehensive research on head trauma caused during football games concluded, after a five-year study tracking high school football players, that it is the repetitive, cumulative damage of run-of-the-mill collisions that is the real culprit, not the highlight reel knock-outs. Read this excerpt from a New Yorker article about Dr. Robert Cantu, a leading clinical professor of neurosurgery who lead the research:

That’s why, Dr. Cantu says, so many of the ex-players who have been given a diagnosis of C.T.E. [a form of brain damage] were linemen: line play lends itself to lots of little hits. The HITS data suggest that, in an average football season, a lineman could get struck in the head a thousand times, which means that a ten-year NFL veteran, when you bring in his college and high-school playing days, could well have been hit in the head eighteen thousand times: that’s thousands of jarring blows that shake the brain from front to back and side to side, stretching and weakening and tearing the connections among nerve cells, and making the brain increasingly vulnerable to long-term damage. People with C.T.E., Cantu says, “aren’t necessarily people with a high, recognized concussion history. But they are individuals who collided heads on every play—repetitively doing this, year after year, under levels that were tolerable for them to continue to play.”

Former linemen have been found to suffer the most from debilitating brain trauma from the build-up of endless little blows. But when was the last time you saw an offensive lineman getting slobber-knocked and laid out on ESPN NFL Primetime’s "Jacked Up!" highlights?

The NFL is thinking big when it should be thinking small. Fining players like Harrison may send a hollow message that the league is getting serious about head injuries, but in the end, it’s a distraction from a reality that is even more grim than the grisly shock of seeing Todd Heap’s chin strap coming unhinged and flying 10 feet into the air.

The truth we don’t want to face is that we all love a game that is barbaric in ways we don’t often see. The eye-gouging and finger-stomping that is a common occurrence at the bottom of piles, for instance, is hidden from the cameras. Our heroes routinely spit on one another. In moments of desperation, they even grab each other where the sun shan’t shine (and if you don’t believe it, read Anthony Gargano’s new book).

That is the real NFL, not the one shined up and sold to you by Sprint and Anheuser-Busch, but the one populated by men Mean and Mad.

So please forgive me if I don’t feign horror when James Harrison admits that he is trying to hurt people out there.

Maybe it’s time to be honest with ourselves: America’s new favorite pastime is inherently dangerous, even terminal. It is played not by The Guy Next Door in his rolled-cuff jeans and aw-shucks grin, but rather The Guy Like You and Me, the self-absorbed, pill-popping misanthrope who sexts while wearing tacky flip-flops. And who fails a lot more often than he succeeds. 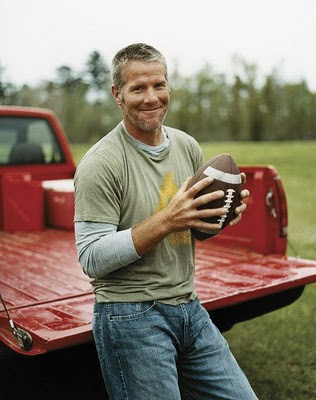 "Shucks ya’ll, I’m just a simple country boy slangin’
the ol’ bawl around the yard after a barbecue."

Football is not for the faint of heart or the easily offended, but perhaps in the whirlwind of United Way commercials, PR flacks and softball personality profiles, we were fooled into believing something that was too good to be true: Wholesome Violence for the Whole Family.

I will revert once again to the master, Mr. Jack Lambert, who in his infinite wisdom said:

“I believe the game is designed to reward the ones who hit the hardest.”

There is nothing the NFL can do short of replacing tackle with two-hand touch and a Nerf ball that is going to change Lambert’s creed.

And so, in conclusion, I will quote another timeless sage, Mr. Omar Little from HBO’s "The Wire":

“I’ll do what I can to help y’all. But, the game’s out there, and it’s play or get played. That simple.”

Until the trenches stop existing, until football stops existing, there will always be a tremendous price to pay. The NFL fining Harrison is not just ridiculous. It’s irrelevant.