This weekend, the Pirates welcome their friendly neighbors from Philadelphia to PNC Park for the home opener. 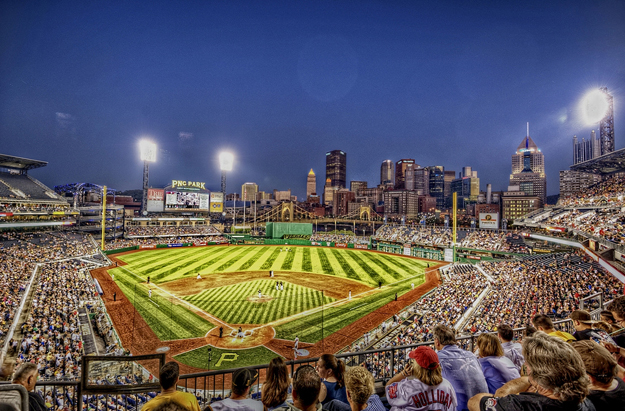 PNC Park welcomes (grumble) Philly for opening weekend
If you’re reading this on Thursday afternoon, you either forgot about the Pirates home opener or couldn’t get out of work. We’re very, very sorry. But fear not — there are two more games on tap for opening weekend, as the Bucs’ cross-state rivals, the mighty Philadelphia Phillies, make their only 'Burgh trip of the year. And you should come out for this series — match-ups with the Phillies usually mean a lot of Philadelphia fans making the trip to PNC Park, and we can’t have chants for Ryan Howard and Shane Victorino echoing around the North Shore, can we? Drown 'em out with some “Let’s Go Bucs!” chants.

If the opportunity to shout down our neighbors to the East isn’t enough of an incentive, Saturday night is also the first Fireworks Night of the year, and the folks from Zambelli have prepared a huge display to kick off the season. And Sunday is 2012’s first Kids Day; fans 14 years of age and younger will receive a free Pirate Parrot Build-a-Bear doll, and you can pre-register to give your tykes the chance to run the bases after the game. We made it through the winter; it’s time to play ball!

The future isn't so bright at Pitt Rep
Now that The Hunger Games has put chilling visions of futuristic dystopias at the forefront of our minds, you’re probably ready for a bit more speculation on just how things could go wrong. (That’s bleak, but so it goes.) Head to the Stephen Foster Memorial this weekend for Pitt Rep’s production of Harvest, a dark satire by Manjula Padmanabhan. A multinational pharma company is pouring money into third-world countries — in exchange for the organs of the citizens, which will be sold to Americans with cash. Young Om agrees to trade a few of his spare parts for the riches of the West — but is it worth it? Find out this weekend in Pitt Rep’s season finale!

Finally, Pittsburgh has a great tequila bar
Being an associate editor around here can make you awfully hungry. Last month, Valentina, our intrepid dining critic, sampled the fare at the all-new Porch at Schenley, and my mouth started watering; next month, we'll publish her take on Garfield’s new, ultra-cool Mexican hotspot, Verde Mexican Kitchen & Cantina. As soon as the first drafts of her review started circulating around the PM offices, visions of enchiladas began dancing in my head. I’d had enough: It was time to get some grub. In this week’s After Dark, I’ll follow in Valentina’s footsteps and check out The Porch at Schenley and Verde, trying to toss in a nightlife perspective on each … between bites, of course.

In theaters this weekend: New films coming to Pittsburgh this weekend, for the most part, aren’t particularly new. James Cameron has converted his '90s megahit Titanic into 3-D, and the full American Pie roster reunites for a poorly timed American Reunion (the movie is forced to admit that the characters are celebrating their 13-year reunion rather than their 10th, for no clearly defined reason). There’s also Bullhead, the Belgian film nominated for Best Foreign Language Film at this year’s Academy Awards. PM Film Editor Sean Collier will appear on the 102.5 WDVE Morning Show Friday at 7:15 a.m. to review American Reunion. Can you make a teen comedy with a cast of 30-somethings? Find out Friday morning on 102.5-FM or DVE.com!

This weekend, the Banff Mountain Film Festival — which features 16 films during its two-day run — comes back to the Byham Theater. With stops planned in about 390 communities and 35 countries across the globe, this year’s tour features a collection of the most inspiring action, environmental and adventure films from the festival. Click here for more.

This year’s Highmark Walk for a Healthy Community is May 19, and PM’s Sean Collier will be walking for The Remi Savioz Glut1 Foundation. RSG1 was founded to spread awareness of Glut1 DS, an ultra-rare brain disease; the Foundation is named for Remi Savioz, a local teenager who's among a few hundred worldwide to be diagnosed with the disease. You can read more about Remi and the Foundation here; you can also register to walk with Sean and Team RSG1 here or make a donation. Hope to see you on May 19!

This article appears in the April 2012 issue of PMWeekend.
Categories: Things To Do