And you thought the Parkway West was an inconvenience. 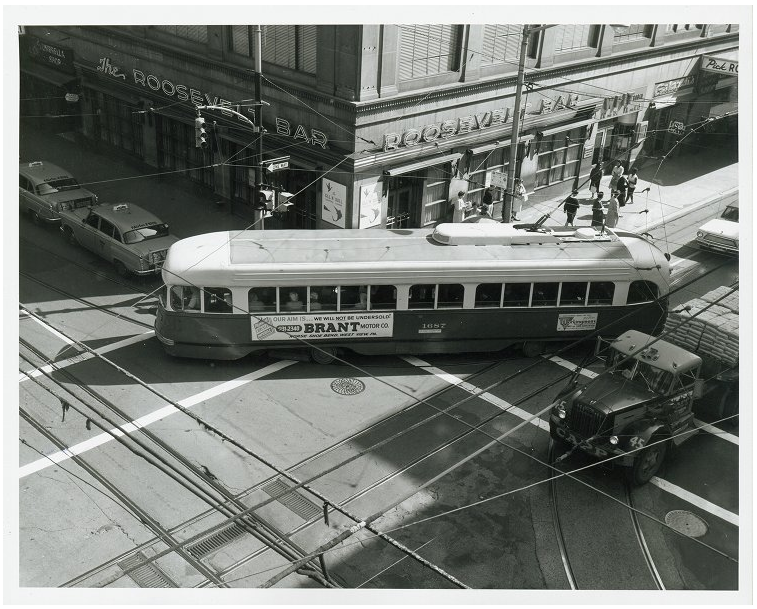 Photos via the University of Pittsburgh's Historic Archive

Things are changing fast around here. Most of us are more likely to hop on a Port Authority bus boasting a Pabst Blue Ribbon mural on its side or log onto our smartphones to get a Lyft than we are to set foot in a train car or on a riverboat.

But let’s not forget: shipping and transportation built the Steel City. In the heyday of freight trains, Pittsburgh’s proximity to navigable rivers made it a natural hub for cargo headed inland.

While Mayor Bill Peduto and County Executive Rich Fitzgerald pursue ambitious plans to revitalize the area’s public transportation system, we went through the University of Pittsburgh’s photo archives to look back on some historical icons and milestones that show how public and private transportation has changed through the years.

In 1877, many workers on the nation’s rapidly expanding railroads made less than $1 a day in increasingly harsh conditions. In July, discontent over these measures came to a boil when strikes broke out in major railroad cities like Baltimore, Chicago and San Francisco. 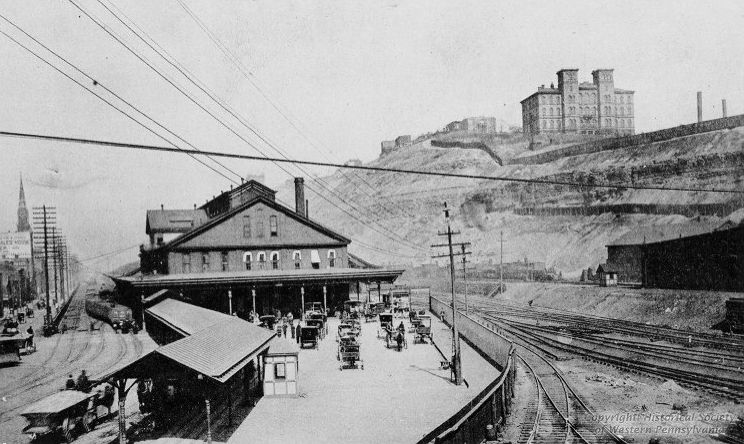 Though National Guardsmen from Philadelphia were brought in to quell the riots, workers set fire to railroad cars and other equipment, leaving more than 40 dead. Pennsylvania Railroad later claimed $4 million in damages. Shown here are the remnants of some cars and the tracks near 20th Street. 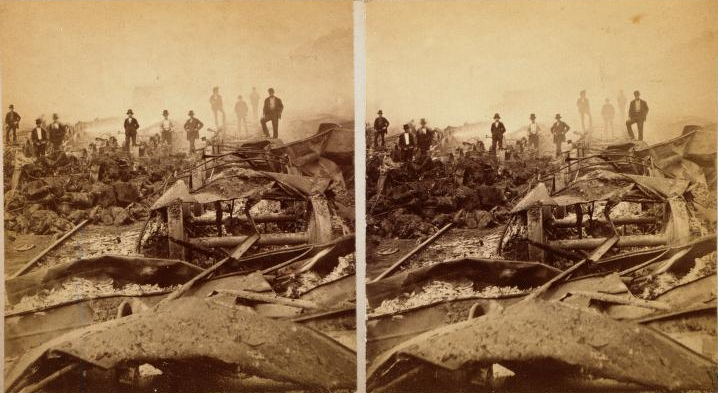 The days before automobiles were simpler times, when a well manicured ‘stache served as the measure of a man’s worth, as this 1905 photo of famed ketchup tycoon H.J. Heinz clearly shows. Incidentally, Heinz’s company was incorporated that same year. 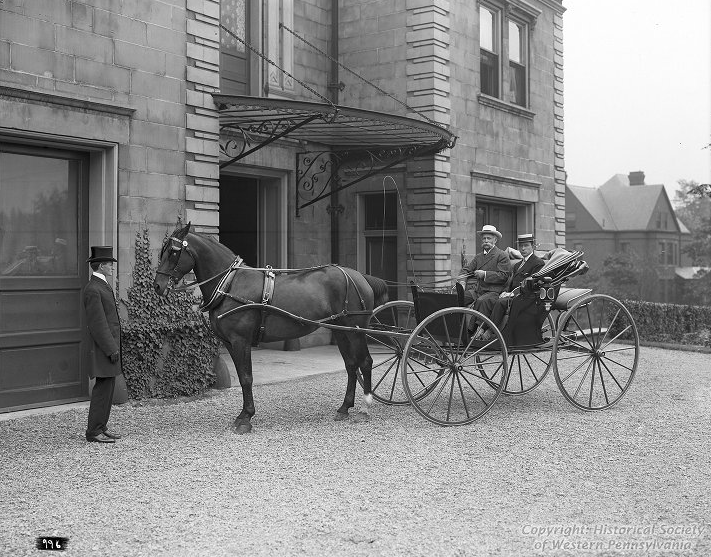 The ketchup tycoon is at the reins alongside his son Clifford, while an unidentified man appears to be locked in an epic staring contest with the horse.

1909: Carriage and railway car at Smallman and 23rd Street.

Because of its proximity to the riverfront and accessible railway, the Strip District was a natural center of commerce during the early 20th century. This photo from 1909 shows the different means of transport that drove economic activity there. 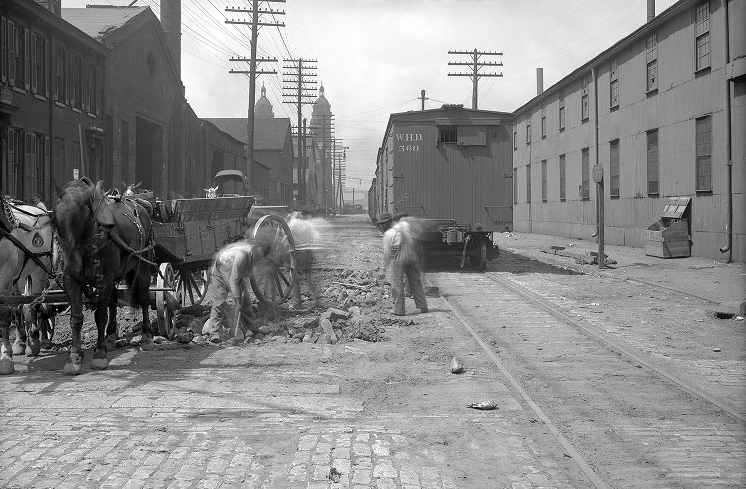 Even today, the neighborhood’s broad avenues make it ideal for markets and business development.

Advertisements of the 1940s tended to be more literal than today’s self-referential and ironic attempts at courting public attention, as this World War II-era street car sign shows. 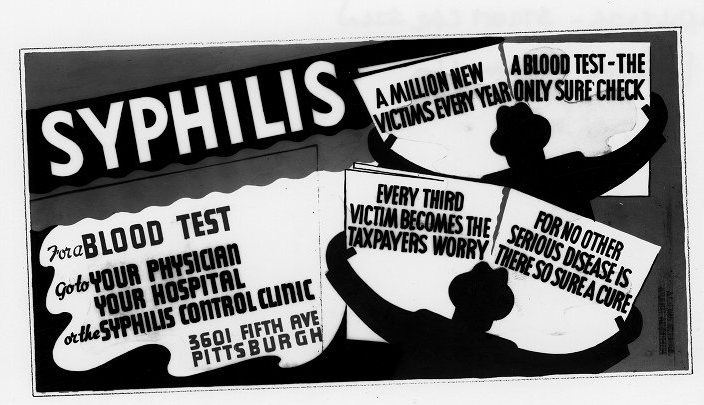 Distance from population centers and rising jet fuel prices mean Pittsburgh International Airport is no longer the aviation hub it once was. But the airport, shown here under construction in 1949, was once the largest in the United States. 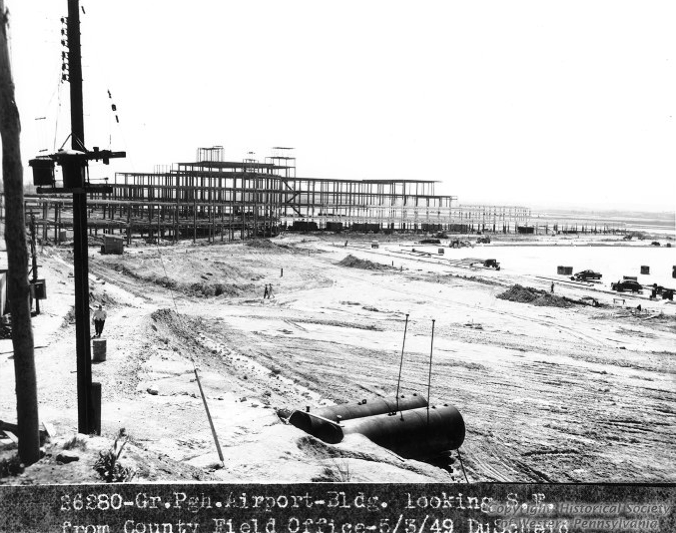 Though this terminal was torn down after operations shifted to a complex in the ultramodern International style in 1992, we can’t but help feel some nostalgia for the curving elegance of the old terminal. 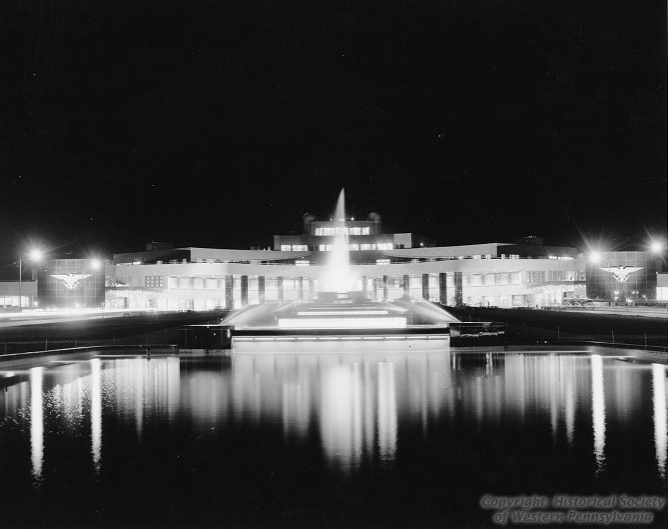 Before the Port Authority was established in 1964, there was the Pittsburgh Railways Company, whose above-ground street cars criss-crossed the city. These trolleys probably didn’t do much to cut down on congestion: as this aerial view of Sixth Street and Penn Avenue shows, their routes often cut straight through traffic.

Still, the retro-cool of a street car is unsurpassed. 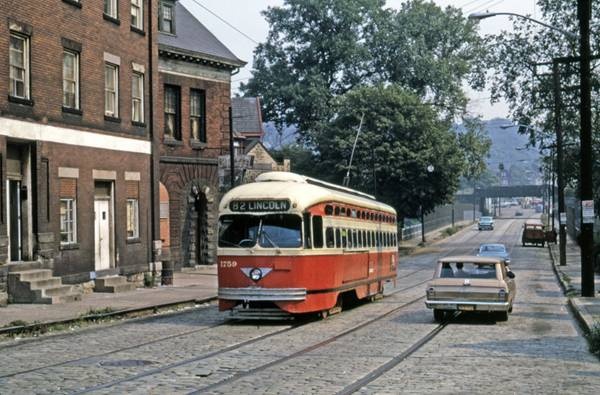