The 12-foot-tall statue stands at the entrance to the Three Rivers Heritage Trail in the Strip District, near Burns Scalo’s Vision on Fifteenth complex. 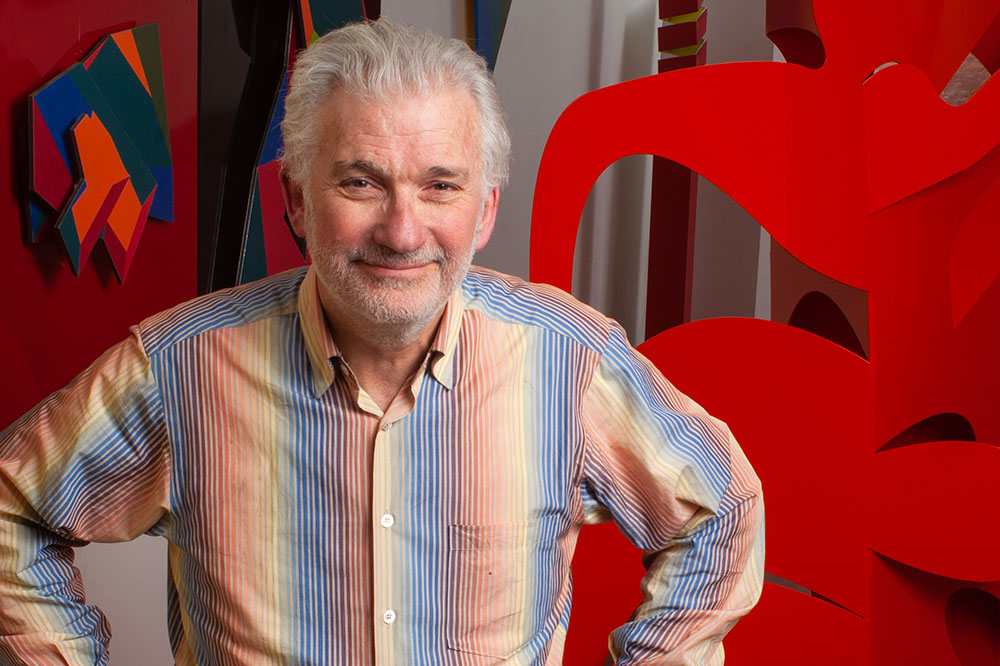 Dan Droz didn’t decide to become a sculptor until his 69th birthday, but that hasn’t stopped him from proving it’s never too late for a new endeavor — and a successful one at that.

Droz, now 71, is the artist behind the new sculpture at the entrance to the Three Rivers Heritage Trail at 15th Street and Waterfront Place, right across from Facebook offices and the Homewood Suites Hotel in the Strip District. The 12-foot-tall piece, entitled “The Gathering,” was commissioned by Burns Scalo Real Estate — the owner of the nearby Vision on Fifteenth multi- use complex — to engage visitors and provide a focal point for the neighborhood.

“Burns Scalo was very interested in creating a meeting place or a gathering area at the entrance to the Heritage Trail. I thought the sculpture itself should reflect that,” Droz says. “The sculpture is called ‘The Gathering’, and it kind of abstractly depicts a group of people gathering together. At one angle, it might look like two people kind of high-fiving each other. From another angle, it might look like three or four people just gathering together.”

Droz taught design courses at Carnegie Mellon University and had a design and marketing firm before making the leap into the visual arts. He’d made a few pieces, mostly in his garage, but that was it. That is, until he started to think about what ought to come next for him on the eve of his 69th birthday. He spoke to an artist friend, who encouraged him to reach out to a local gallery, and the rest was history.

The goal of his new career, he says, is to put sculpture in public areas that engage the folks who come to see it.

“I wanted to be able to make a difference with art,” he says. “The purpose or the main objective would be to eventually be able to make sculptures that would help define and/or elevate a space with art that has some relevance in people’s lives.”

That was exactly what drew him to the Burns Scalo project in the Strip. 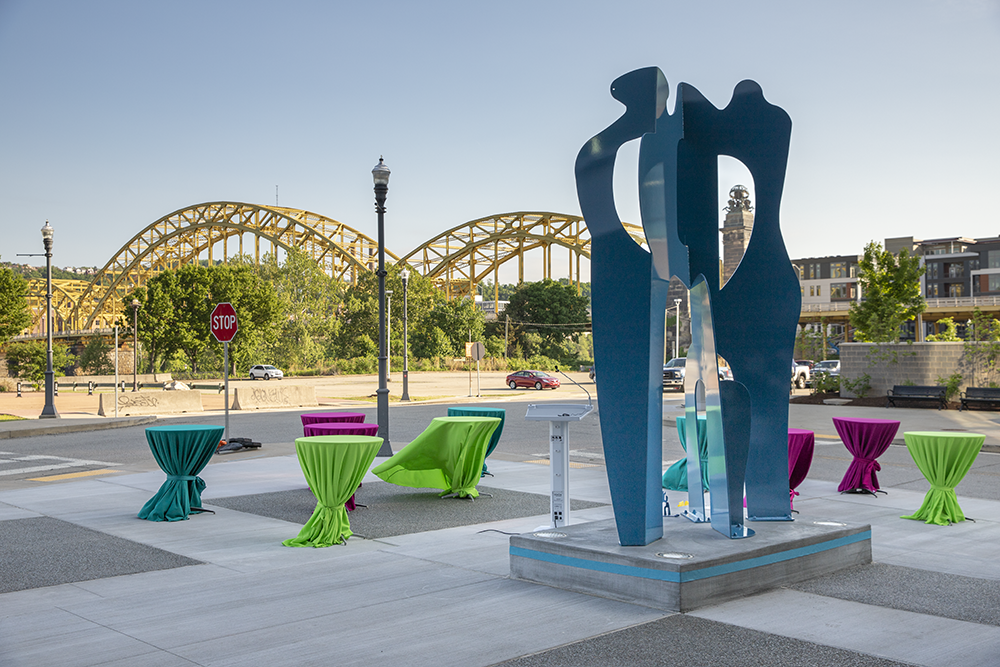 He first became involved with it in May of last year. During a lull in COVID case counts, galleries opened again for a few shows, and one of them was a joint effort between James Gallery in the West End and the Lawrenceville-based Associated Artists of Pittsburgh. They contacted Droz and asked if he’d be willing to do a solo, in-person show, and Droz quickly agreed.

Pamela Austin, the brand manager for Burns Scalo, was in attendance. When she saw Droz’s work, she asked James Frederick — the owner and founder of James Gallery — if Droz would be willing to do a sculpture for the real estate development company.

“So I met her there, and talked to her about that, and then subsequently met with her about their vision for that space and within a few days, I gave them some sketches of a mock-up,” he says.

The result was “The Gathering” as it stands today, celebrated at a ceremony on May 24. Most of Droz’s work features bright colors and the common theme of connectivity — the idea that people and relationships are important.

“I’ll stick to what people have said to me. [The sculptures] make them feel happy, they’re very accessible,” he says. “People seem to gravitate toward certain pieces and connect to them easily. There’s no intellectual struggle to engage with them.”

While “The Gathering” shares in that common theme of connectivity and accessibility, there are a few things about it that he says make it stand out — namely, its size. 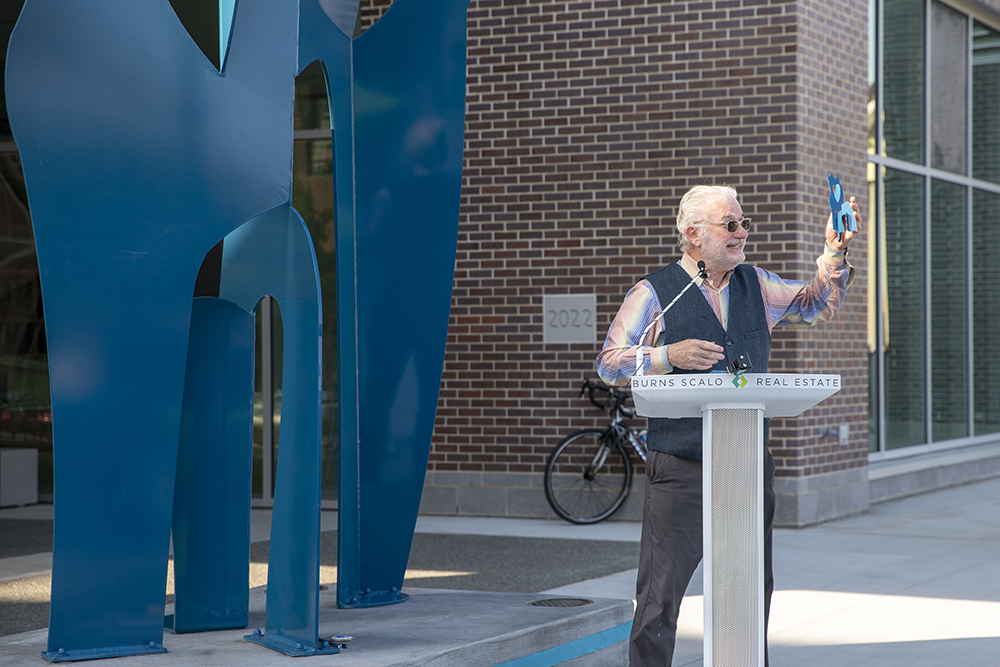 PHOTO BY LOUIS WEIMER/BURNS SCALO REAL ESTATE | DROZ AT THE SCULPTURE’S OFFICIAL UNVEILING ON MAY 24.

“It’s the biggest sculpture I’ve made to date. Scale itself has an effect on your engagement with the sculpture; the scale of the sculpture creates much more of a space or a place,” he explains.

An 8-inch figure sitting on a desk, for example, isn’t a place-making object. But a 12-foot-tall statue in front of a complex is a different story entirely.

“The effect is that it can become a gathering space. It can actually impact the way people behave in a space or interact with the sculpture in the space itself,” he says.

He hopes that this will be a way to represent to other developers or architects that are planning public spaces to include sculpture and art in their plans.

“My ultimate goal is to make large sculptures for public spaces. I felt that this is an example of how it can be done, and how I can do it,” he says. “Other developers or architects or cities will see this as an example of how I might be able to help define a space in their own city or for their own project.”

Droz also has a book of his artwork coming out later this year.