The categories for the 2015 parade include everything from best float to best band to best senior non-Irish marching women. 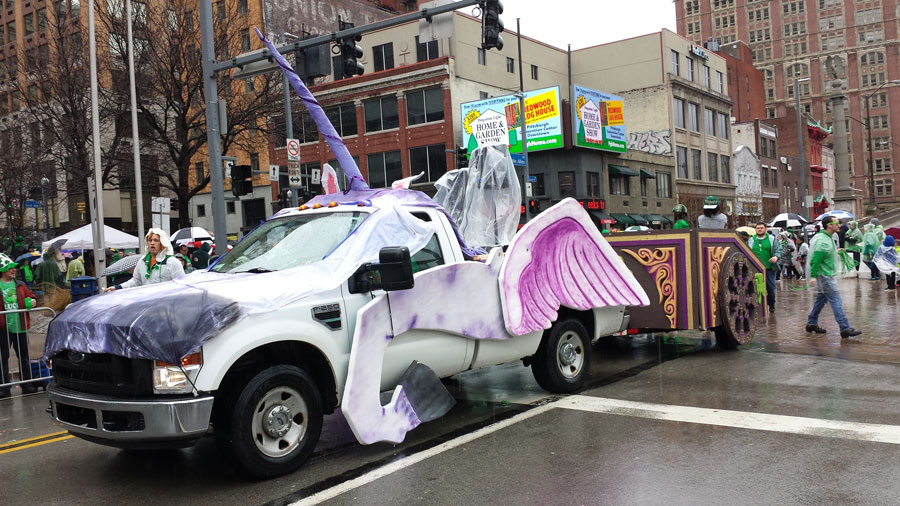 The event on Saturday drew hundreds of Pittsburghers and winners in 21 categories.

Cleaveland/Price Inc., a Trafford-based manufacturing company, took home the Grand Marshall’s award for Best Overall Entry with its rendition of “The Unicorn Song” (above). In its fifth year, it was the company’s first Grand Marshall award following four consecutive Best Commercial Float wins.

The themed float, preceded by an eight-member drumline, featured a pickup truck decorated as a unicorn drawing a chariot. Employees — dressed as a green alligator, cat, rat, chimpanzee and elephant — tossed out candy and Irish beach balls and shot paper confetti cannons.

“It was rainy, but we still had a fantastic time. We love to get all our employees and get everyone together for a social experience outside of work,” said company President Rae Sweeney. 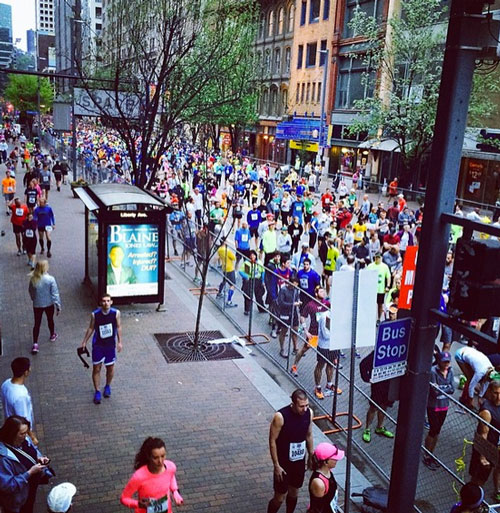 #Props: Local teacher has run a marathon in every state

The engineer-turned-chemistry teacher has participated in a marathon in every state, the last of which took place in summer 2014 in Hawaii. He first became interested in running marathons when admiring the marathon scrapbook of a former employer who ran the London Marathon. Ward registered for his first Pittsburgh Marathon in 2001 — and to date has completed it eight times.

“Every time I look forward to running through the streets on which I have trained, seeing students like the Shaler Area Track and Field team’s water stop at mile 4 or 5 and seeing colleagues at mile 20 in Highland Park or at the finish line,” Ward told The Shaler Oracle, the school’s student newspaper.

After finishing the Pittsburgh Marathon one year, Ward noticed another runner wearing a shirt for the 50 States Marathon Club, which requires members to complete a marathon in at least 10 states. Ward knew he wanted to work toward 50 as a new goal; according to him, running 26.2 miles isn’t as tough as planning trips to all 50 states.

Going forward, his new goal is to run each of the 50 marathons in fewer than four hours. He’s already finished half of them in under that time (no big deal). Though post-race recovery can be tough, Ward says he’s ready for more: “The best part is finishing, getting the medal.”
—Cristina Holtzer

Leaders in the medical, faith, legal and activist community will talk solutions next week on what PublicSource calls the state’s “deadly crisis.”

The state news organization will host a public-interest forum on heroin usage and overdose at 6:30 p.m. on March 24 at Pittsburgh Center for the Arts in Shadyside.
The event’s intent is to discuss “solutions to the heroin epidemic” and prevention strategies from a community and healthcare perspective, says PublicSource spokeswoman Pam Goldsmith.

The event comes after heroin-related overdose in Allegheny County reached 139 deaths last year, according to PublicSource.

The organization’s recent reporting on statewide legislation and preventative measures revealed that the issue needs “more awareness,” Goldsmith said.
Other topics will include education, rehabilitation and its costs and treatment of addiction as a disease.

Through the forum, the organization hopes to “look at the importance of education and the stigma of drug addiction and how that affects the attitudes and responses of people in the community,” Goldsmith added.
—ND