Pittsburgh’s Refugee Children Could Use a Good Neighbor

Those who eye 8-year-old children with suspicion have more than a self-awareness problem. 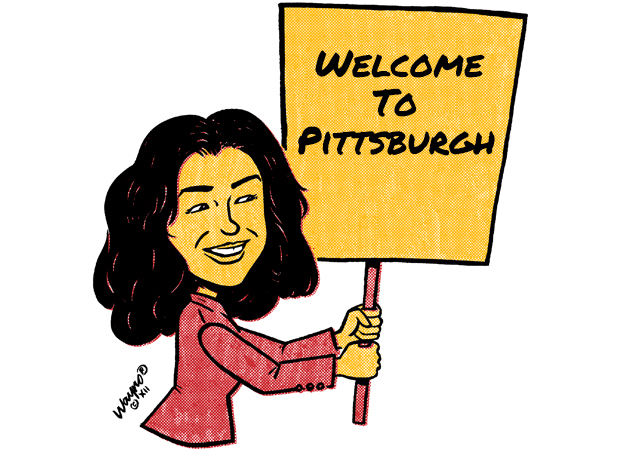 Full disclosure: I am a moderate conservative with liberal leanings, and I’m married to a Mexican. Let’s just get that out of the way so you know exactly where this post is coming from.

My husband has never stepped a tootsie on American soil in any illegal way. We met in Mexico, where he was born and raised. He applied for and was denied a tourist visa to visit me in America. After two months of petitioning Senators, he finally was granted a visa. He returned to Mexico after each visit. (*Cue the swelling Disney music*) Then we were married. He applied for a green card. He was a conditional resident for two years. Then he was a permanent resident. Now he is a citizen of the United States of America.

I do not support illegal immigration. I think. I don’t know. You know why? Because I have visited Mexico. I have read the stories. I watch the Mexican news stations. The borders are terrifying. Work is scarce. Jobs might pay you $5 for a whole day of manual labor and then you have to go home and figure out how you’re going to feed your children. Once, I said to my husband, “I don’t agree with illegal immigration, but if we lived in Mexico and our kids were sick and hungry, I would probably dropkick you over the border fence myself.”

And that is what we forget when we fight about illegal immigration … human beings. Is that too liberal of this conservative to think about the human side of this debate? I don’t know. But I think about them because I’ve traveled there. I’ve seen shoeless children living in mud-floor huts. Abject poverty in a drug cartel-ruled society. Own a business in Mexico? Hope you’re OK with paying a weekly fee to the drug cartels for “protection.” From them.

Look at your child right now. Despite all our daily anxieties in this country, there’s a good chance they’re healthy. Well-fed. A pantry full of snacks. A closet full of clothes. A safe school just down the road. A future full of promise. Even if you’re struggling, you’re still well-off compared to Mexico’s poor.

Now imagine your child … YOUR child … living in that one room hovel with a dirt floor. No shoes. One shirt. There’s no work. No money. You send him or her out each day … not to school … but to beg. Their lives are in danger due to daily violence. You’ve got this one life to live, and each day of it is passing by with no improvement, no matter how hard you work. You can’t climb the ladder when the ladder doesn’t even exist. Maybe it’s too late for you, but what if there was something you could do for your child to give them a chance at a decent life?

Answer me this, Pittsburgh: Wouldn’t you do it?

Of course you would, and you know you would. Don’t try to tell me differently.

You’d think in Pittsburgh — a city literally built on the backs of immigrants from Ireland, Italy, Germany, Croatia, Poland and Eastern Europe — we would empathize with the boldness of such desperation. Yet those organizations and individuals who have fostered homeless children, such as the Holy Family Institute in Emsworth, have faced suspicion. Dislike. Distrust. Hate.

Residents near Holy Family are voicing concern as evidenced from these quotes from a recent Pittsburgh Post-Gazette article:

"A lot of community members are concerned about the disease and drug cartel involvement these children could bring," said Emsworth Mayor Dee Quinn. "The news was quite a shock.

What really worries me is the turnover — every 30 to 60 days we'‍re facing a new batch of kids we know nothing about," said Robert Keller, the owner of Eclectic Arts and Objects Gallery. "It'‍s like every month, putting one bullet in a gun and putting it to your head."

"Everybody has the same issue that I do,” said Keller. “We know that gangs have 8- and 12-year-old members. We can't look at that age group the same way that we look at kids in a more civilized country."


No. Everyone does not have that same issue. Closed-minded people who have forgotten that these are human beings — who have forgotten what is written at the base of the Statue of Liberty — have this issue. The rest of us realize these children were not sent here to form violent gangs. They were sent here to eat. Learn. Make a life.

Disagreeing with illegal immigration on economic grounds is a valid principle. That’s your opinion. That’s your right. But when you express your fear on Facebook or at the water cooler that these little children will literally “disease” us and form violent gangs and destroy the fabric of the country  … well, you’ve taken a wrong turn somewhere near Ellis Island.

You’re looking at an entire race not as human beings with dreams and feelings and potential but as one big stereotype of drug-running gang members who want to ruin America. And that makes zero sense.

These are children (children!) searching for a better life.

I’m not saying we need to open our borders.

Stand up and join me in saying it: We need to show these kids mercy and compassion, like good Pittsburgh neighbors. We need to acknowledge that the only thing that separates our children from them is that ours were lucky enough to be born in a first-world nation. They won the ovarian lottery.

“Give me your tired, your poor, your huddled masses yearning to breathe free.”

Let’s not turn our back on her … or them.

This article appears in the July 2014 issue of PittGirl.
Categories: Hot Reads, PittGirl