Valentino has more than doubled in size since his arrival at the National Aviary three months ago. 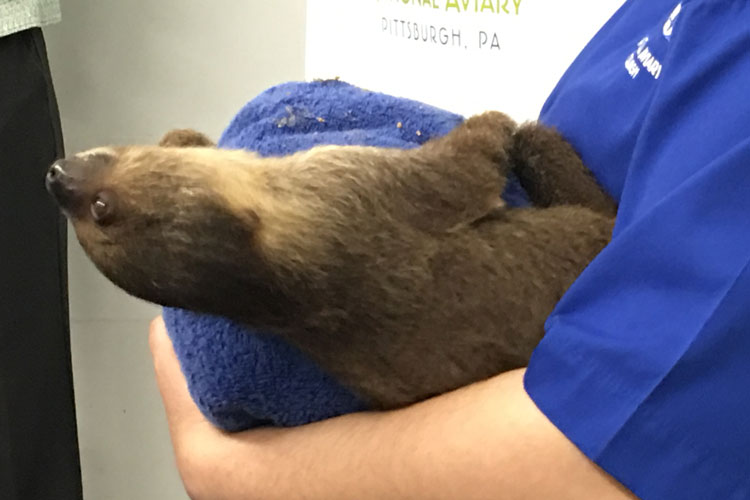 In February, the National Aviary rolled out the red carpet for its newest arrival: A Linnaeus’s two-toed sloth. Now the sloth, christened Valentino because of his Valentine’s Day arrival, is celebrating his five-month birthday with a veterinary checkup.

The sloth’s checkup went well, according to Director for Veterinary Medicine Dr. Pilar Fish. “Everything is really normal. He’s growing well and appears to be very healthy,” she says.

Valentino, as we also learned, is being trained to handle what's expected to be a lot of visitors.

When he is fully grown, Valentino will weigh between 15 and 20 pounds and spend a full 15 to 20 hours of his day sleeping.

Many visitors wonder why the Aviary even has sloths when it's a haven for birds. In order for a facility to be accredited by the Association of Zoos and Aquariums, the U.S. Department of Agriculture must inspect it, and that organization won’t inspect an institution that houses only birds. The Aviary’s sloths also act as “animal ambassadors” to raise awareness of rainforest conservation efforts in Central and South America.

“Exhibiting a sloth and birds together helps us illustrate the importance of biodiversity,” says Robin Weber, director of marketing & communications at the Aviary.

“Doing so helps create awareness for the rainforest, where so many of our bird species, as well as animals, live and the importance of protecting the world around us.”

While Valentino becomes acclimated to being around people, visitors can book a private encounter, during which they can touch, feed and take photos with him and learn about rainforest conservation.