Pittsburgh's Most Popular Employee is Furry and Four-Footed

River O'Malley may not be making any major policy decisions, but his presence in the Pittsburgh City-County Building as the city's official canine ambassador is a delight to those who do. 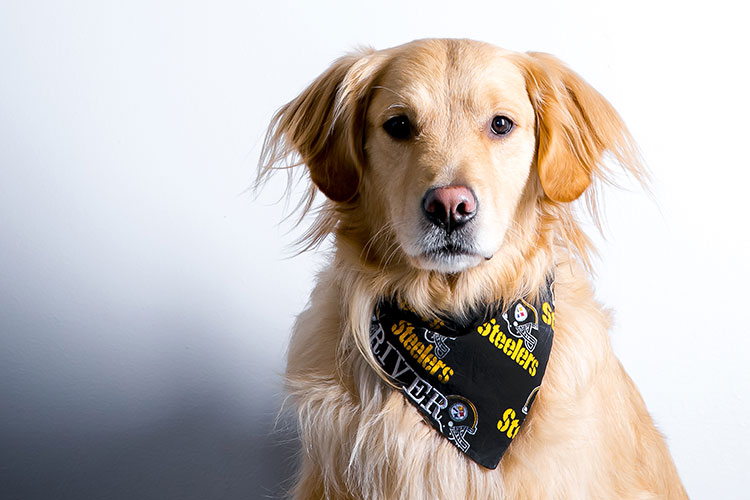 Unlike many office workers, River O’Malley looks forward to Mondays. That’s when he resumes roaming the halls of the Pittsburgh City-County Building as the city’s official canine ambassador. His co-workers are happy to see him too, welcoming him with pets on the head.

“Oh, he’s wonderful,” Guy Costa, Pittsburgh’s chief of operations, says about River, who often follows Costa into meetings with Mayor Bill Peduto and other dignitaries, including a delegation from Slovenia that was charmed by the golden retriever.

Every weekday, River catches a ride into work from the Morningside home he shares with his owner, Katie O’Malley, the city’s communications coordinator. During business hours, 3-year-old River roams the fifth floor, stopping off at O’Malley’s office (filled with doggie beds and toys) when he’s not keeping nearby workers — including Peduto and other top city officials — amused and comforted.

River’s presence has brought notable stress relief to the workplace, says O’Malley, whose office door carries both her name and River’s. “It’s hard to remember when he wasn’t here,” she says. “He’s gotten to become quite popular.”

River’s duties as canine ambassador, a position he assumed in October 2016, go beyond the walls of the City-County Building — where he has also been known to mingle with people reporting for jury duty. He regularly appears at public events such as Light Up Night and the St. Patrick’s Day Parade.

Like Edie, the former canine ambassador at the Fairmont Hotel, River came to Pittsburgh from Circle Tail, a Cincinnati-area nonprofit that provides service and hearing dogs for people with disabilities at no cost. Just like Edie, River — who has active social media accounts on Facebook, Twitter and Instagram — was disqualified from the program for being too social. River also was too food-motivated (as is clearly demonstrated by his keen attention to people fixing lunch in the break room).

“River knew there was life outside the vest,” says O’Malley, who adopted River when Circle Tail released him last year. It was perfect timing, because O’Malley had been advocating for her workplace to have a resident dog — and what better mascot for Pittsburgh than a golden retriever named River.

This article appears in the March 2018 issue of Pittsburgh Magazine.
Categories: Community Feature, From the Magazine, Hot Reads