As "Mad Men" fades into TV history, we revisit an interview with a former Carnegie Mellon University drama student who auditioned for one role but landed another on the hit series. 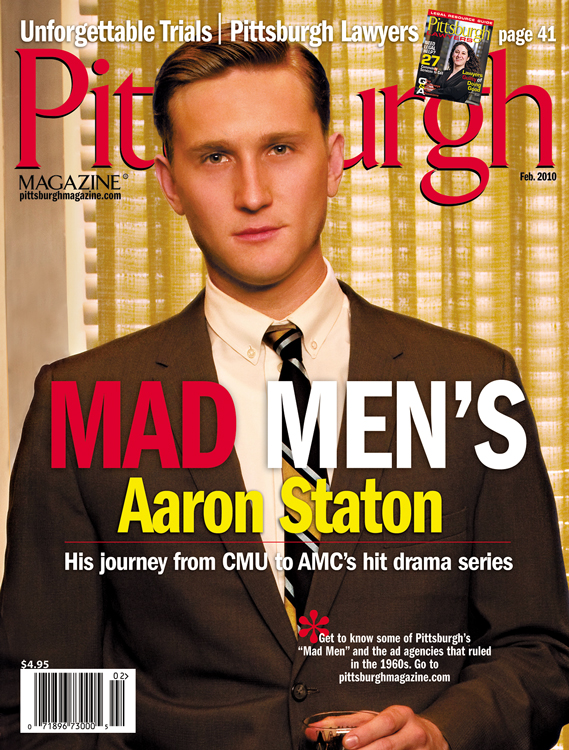 Editor's note: This story was originally posted in January, 2010

Unlike many successful actors who can be impossible to reach, Staton, 29, is accessible, gracious and generous with his time, talking with Pittsburgh magazine for nearly two hours and responding personally to several e-mails for this story. Better known as Ken Cosgrove in the AMC original drama series “Mad Men”—about a fictional advertising agency in Manhattan during the 1960s—Staton is a down-to-earth, everyday guy.

When he auditioned for “Mad Men” in March of 2006, Staton didn’t plan to read for the role of Cosgrove. That character is the senior vice president of account services at the fictional Sterling Cooper ad agency who just happens to be the all-around, sensitive, happy-go-lucky gentleman of all the “mad” men. Instead, he auditioned for the role of Pete Campbell (played by Vincent Kartheiser), the ruthless co-head of accounts.

The two roles are miles apart, and Staton recalls being thrilled to have been cast as Ken. “My audition for Pete Campbell had gone terrible,” recalls Staton. He was called back for a second audition. “That time I did much better; I just don’t know how it happened that I got a second chance and I ended up back in that room.” Don Wadsworth, one of Staton’s drama professors at Carnegie Mellon University, says it’s “very typical for actors to feel they blew an audition, but if the casting agent sees a quality that’s there, they will keep the actor on reserve for another role. That’s exactly the way it played out for Aaron.”

“When my agent called me with the good news that I was given a role for the pilot—not as Pete Campbell, but for Ken Cosgrove—it was amazing,” says Staton. He was set to do the pilot, and if the show was picked up to series, there was a possibility of his role recurring for a couple of episodes. “Mad Men” got picked up, and Matt Weiner, the series’ creator, called Staton directly with the good news. “When Matt called and offered me the part as a series regular instead of recurring, it now meant I would be in most of the episodes and I signed a multiyear contract.”

Adds Wadsworth, “Being able to land a regular role is pretty astounding, and for ‘Mad Men’ to catapult the way it has, nobody had any idea this show could be something so big.” 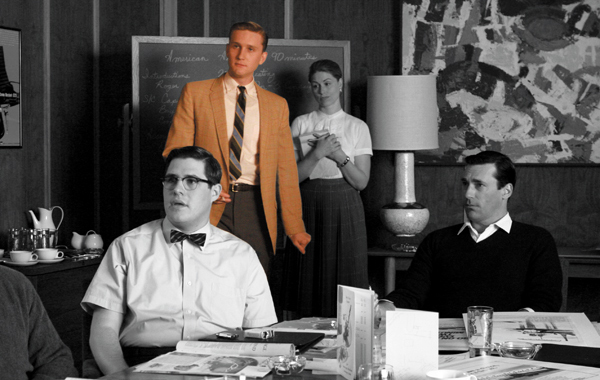 An astounding 2.8 million viewers tuned in for the third-season premiere last fall. “It’s beyond exciting to be a part of this whole thing,” says Staton, who believes he relates well to his character. “In some ways I have a few things in common with Ken. I am generally an optimistic person, and I mean what I say.”

As regular viewers know, Staton’s character also has a creative-writing interest and has been published in The Atlantic, but Staton himself has never pursued writing with much seriousness. “Ken’s writing is a big part of what makes his character sensitive, but I’ve written the occasional short story as a kid—and it always involved somebody with their arm falling off or something silly.”

Staton loves the challenges of his work. “The challenge is—at times—reading the scripts and watching the episodes and evaluating what else my character is meaning by what he’s saying or doing,“ he says. “It’s evolving with Ken’s growth within the show. A typical day on the show includes reading the script at home; then a table read where the entire cast goes through their lines; and then wardrobe, hair and makeup; and, finally, filming the hour-long drama that keeps me challenged.”

Staton describes “Mad Men” as one of those shows that bring you into a world and a lifestyle where characters intertwine. “It’s addictive,” he adds. One of his favorite episodes is the series pilot titled “Smoke Gets in Your Eyes” (see the episode recap at amctv.com/originals/madmen /episode1). The opening scene takes place in a swanky Manhattan bar, and men in suits are sipping martinis. The stage is set for the Madison Avenue-inspired “Mad Men.” As Staton explains, “Our characters are based on the men from that time period. All those guys were gentlemen. They were opening doors, standing when a woman stood while buttoning their jackets—how they conducted themselves was based on a whole different handbook than what we see today.”

CREDITS CMU FOR HIS SUCCESS

With his heart set on an acting career, Staton—he’s originally from Huntingdon, W.Va., where he lived until he was 9, when he moved with his mother, Susan, to where he refers to as home in Jacksonville, Fla.—enrolled in 2000 as a musical-theater major in CMU’s School of Drama.

“My first year at CMU was great,” he says. “One of my fondest memories was seeing a big snow, and I remember other students grabbing trays from the cafeteria and going sledding in Schenley Park.” He recalls that the snowstorm came fast and furious, and the Floridian had no coat or scarf. “I rode the 61C from Oakland to The Waterfront in Homestead and bought my first winter coat at Old Navy.”

Staton is quick to relay how he enjoyed his time at CMU and credits Wadsworth for guiding him in the right direction. “Don helped me decide if majoring in musical theater was right for me or not,” says Staton, whose focus had always been acting.

Wadsworth fondly recollects those days. “I could talk about Aaron a lot. He is a very special guy. When he was a senior, he came up to me and said, ‘I think I want to switch my major from musical theater to straight acting—I don’t think musical theater is my thing.’” Wadsworth said to Staton, “Are you sure? What if a meaty role comes up on Broadway one day, like a Mamma Mia!—what would you do?” But after Staton gave it some thought, he decided he preferred drama to musical theater and changed his major. “I had no interest in pursuing musical theater and wanted to concentrate on acting.”

Ironically, Staton moved to New York upon graduating in 2004 and got an audition for—what else?—Mamma Mia!. Staton got the role of Sky. “It just worked out,” says Staton, who did more than 400 shows. “It was intense, and I was definitely ready after a year to pursue something else,” he says. 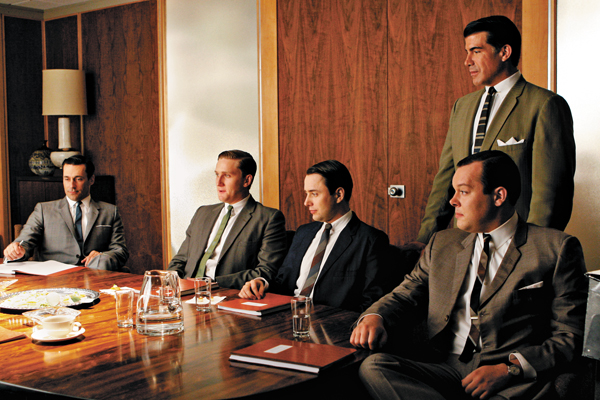 LANDING ROLES IN TV AND FILM

Staton moved on to drama and was cast in several films including August Rush and The Nanny Diaries. His television credits include “Without a Trace,” “7th Heaven” and “Law & Order SVU.” In that last show, Staton played Andy Wall on an episode. Of that role, he recalls, “I didn’t do it; they had the wrong guy. But later I played Hugh on an episode of ‘Without a Trace.’ I was the bad guy and on this show—I did do it.”

That Staton’s success was achieved so soon after his graduation from CMU doesn’t surprise Wadsworth. “Aaron has a kind of blessing all around him I think he deserves. He is a very good-looking, masculine guy who can be easily cast.”

Staton acknowledges how fortunate he has been and can only conclude that it was the way CMU prepared him for life after graduation. “The school and the program did a great job preparing students for the future—focusing on developing our skill set in the craft of acting.”

After years of doing school plays and growing into his 6-foot-2 stature, Staton scored his first acting job at age 17. “My manager booked me on my first commercial.” The spot was for a local furniture store, and Staton had to sit on a couch and cheer for a game he was watching on TV. He made $150. “It was music to my ears,” he says. 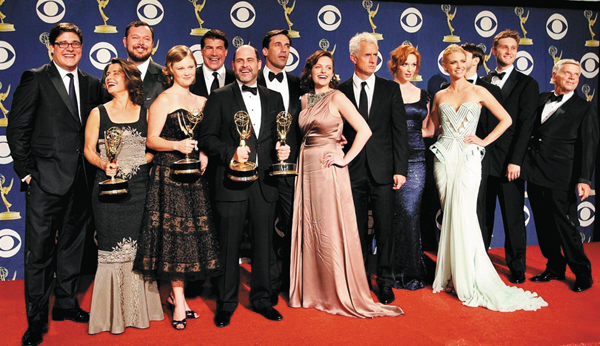 On Dec. 18, 2006, Staton married Connie Fletcher, an actress best known for her role as Erin Lavery on “All My Children” during the 2005-’06 season. The couple are from Jacksonville, and they first met during their high school years doing community theater.  “We went away to college and then ended up in NYC at the same time,” says Connie. “Our agent at the time said we should go out, and we did. The timing was perfect.” 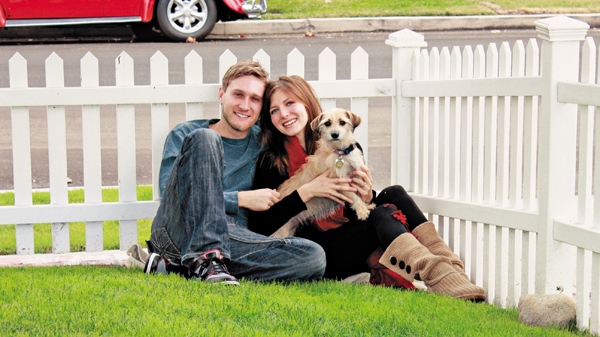 Has the new-found fame and success of “Mad Men” affected Staton’s grounded approach to life? The actor says no and goes on to say that the most gratifying parts about life aren’t the big things but the little things. “Little things—like how much I love drinking a cup of coffee with Connie on our patio in the morning,” he says.

“Aaron is definitely unchanged by the success of ‘Mad Men,’” Connie adds. Moreover, she says he’s aware of how fortunate he’s been. “The longer you’re in this crazy business, the more you can appreciate how unique an opportunity this show is. I know he feels proud to be a part of something of such high quality and lucky to work with such wonderful people.”

1. PRIMANTI BROTHERS
"My favorite is their pastrami-and-cheese sandwich–I love that they put the french fries on the sandwich, not next to the sandwich."

2. THE PITTSBURGH STEELERS
"They're a great team. There's no other team that plays like they can–with or without the ball–until the last second of every game."

3. PORT AUTHORITY
"I could get around where I needed to go–like to the Waterfront in Homestead for a winter coat."

4. CHANGE OF SEASONS
"Pittsburgh has a great fall and beautiful snow in winter. That was a nice experience coming from Florida."

5. THE ORIGINAL HOT DOG SHOP
"I know it's another restaurant, but I have to say I love their cheeseburger and fries."