37 teams aimed their flying machines for the skies and all of them got wet, some sooner than others. 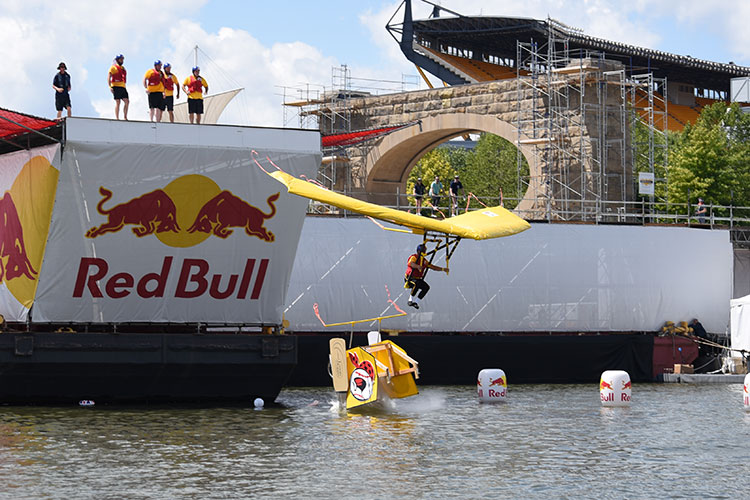 Few things are more inherently amusing than watching failure in action. The spectacular, sudden, complete collapse of a well-laid plan — particularly when gravity is involved — is usually hilarious.

Red Bull Flugtag is that, as a sport. 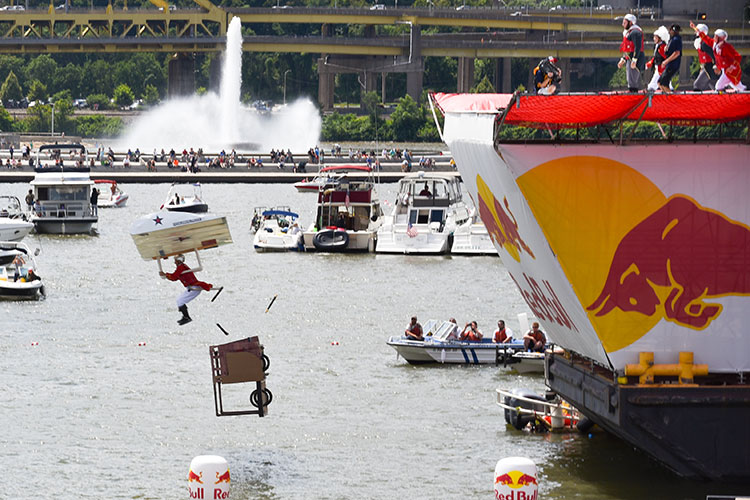 The flying-craft competition has taken place all over the world, in many cities drawing gargantuan crowds to riverfronts and beaches. The basic premise: A team builds a human-powered contraption intended to keep a pilot airborne for a few seconds. The team pushes that contraption off of a pier. In most cases, things do not go precisely as planned; in all cases, the pilot is given a quick introduction to the water below, the carefully constructed craft crumpling in their wake. 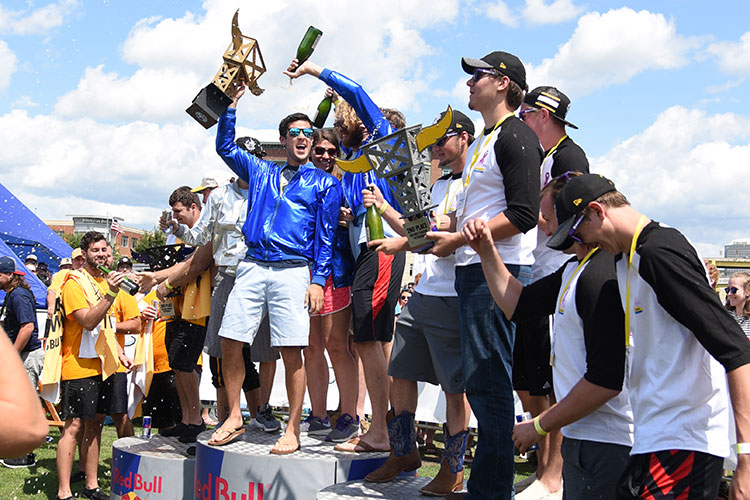 Saturday, the first-ever Pittsburgh edition of Flugtag took place in the waters of the Allegheny. A 37-team competition was eventually won by the Flight at the Roxbury team; their craft and costumes were a tribute to the Will Ferrell comedy, dances of which were recreated in the team’s pre-flight skit (each squad is required to dance, flail or otherwise debase themselves during a 30-second routine leading into their flight). 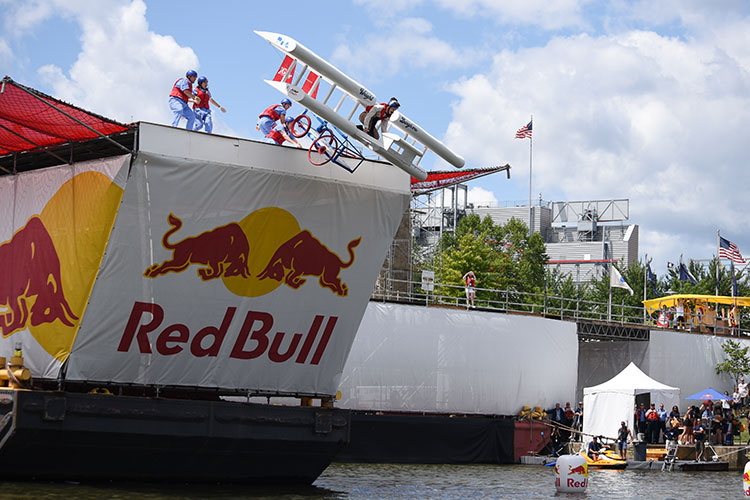 Flight at the Roxbury did not take the farthest distance; that honor belonged to the Survivor Tractor team of New Holland, Pa., former Flugtag champions, who soared 121 feet (just under half the distance of the world record). The final score, which was not revealed, is based on a mix of distance travelled and judges’ rankings — a sextet of evaluators, two of whom were members of the “Red Bull Air Force” and parachuted into their positions after leaping from a plane high above the Point, ranked every team on presentation and concept — edging the Roxbury team, of McLean, Va., over the more lofty Tractor squad.

The third-place squad was a contingent of PNC Park’s Left-Field Loonies, whose Pirates-themed craft managed a few dozen feet of forward momentum. They were one of several Pittsburgh-themed vehicles; the aptly named Monongahela Decline squad hurtled a mock Incline car off the precipice to the sound of Steelers anthem “Here We Go,” while a Kennywood-themed contingent dubbed the Phantom Flyers presented a pilot dueling with cape-clad phantoms (“That young lady took on the forces of evil,” the Flugtag announcer cried,) before sinking an oversized Potato Patch order into the river as styrofoam fries feebly floated away. 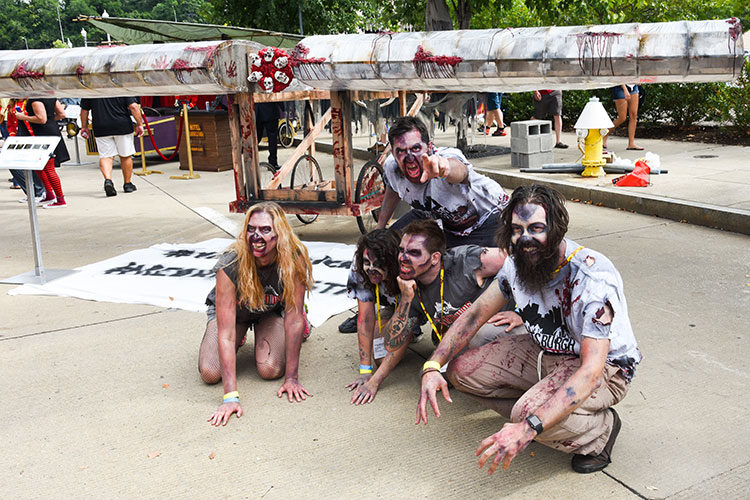 A team of ScareHouse staffers, all in full zombie regalia, arrived bearing a wooden wing that looked as if it had been plucked from the walls of the Etna haunt. Dripping in blood and cobwebs, the craft looked more like an anchor than a sail. “Whatever it does, it’s gonna do it big,” said ScareHouse owner Scott Simmons. He was correct: the undead aircraft aggressively dove forward before smacking the water with a mighty thud. 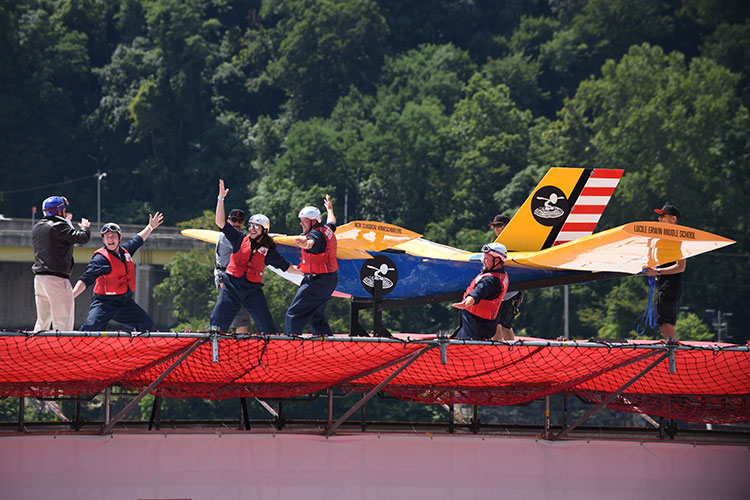 Meanwhile, a team of engineers from Pitt saw extensive research washed away, their intricately designed craft having stuck quickly into the humble waves of the Ohio like a misshapen lawn dart. Theo Schwarz headed the Roc-Ettes, so named for the Pitt mascot (but yes — they did incorporate a kickline into their routine). Speaking to Pittsburgh Magazine before the competition, Schwarz was hopeful: “A lot of teams went for flashy, stylish design. Ours is purely meant to go far. We put a lot of effort into the engineering side and the design side before we started manufacturing. 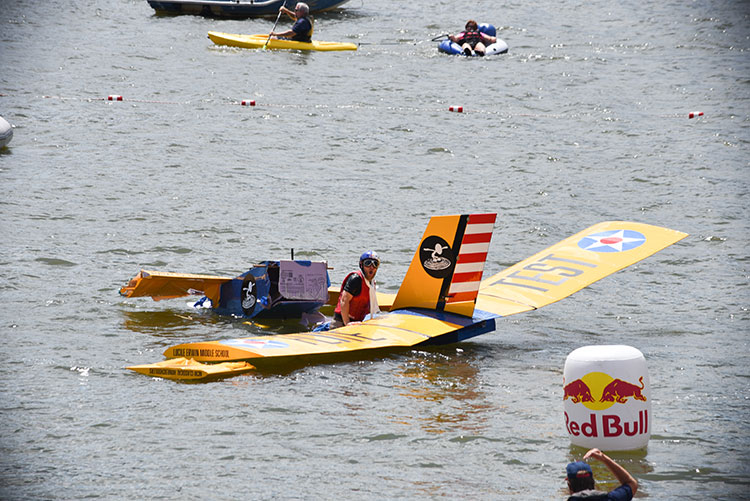 Sadly, it was not to be; the Roc-Ettes craft pitched to one side immediately upon leaving the flight deck, unable to do much more than arrest its fall as it plummeted to the water with a disappointing splat. 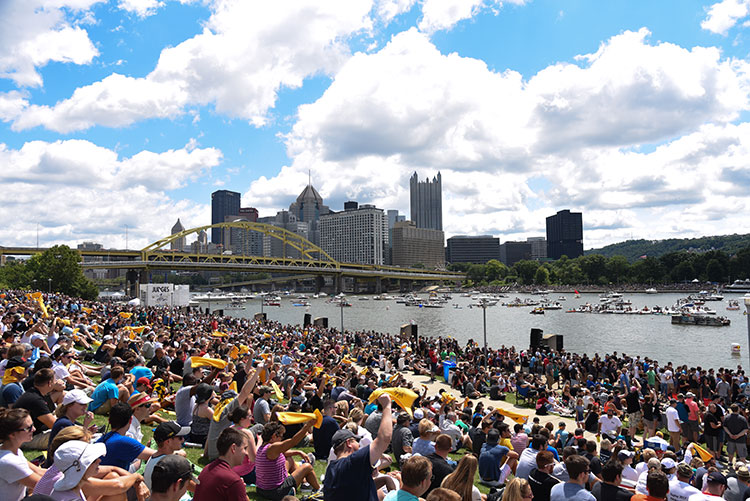 The crowd, coating a chunk of the North Shore lawn with more spectators gazing on from the Point, was enthusiastic early in the proceedings. A bit of calamity broke the levity midway through the competition, however, when a pilot appeared to be knocked unconscious in a failed attempt. The Back to the Future team, from charity Have Fun Do Good, created a giant replica of that film’s hoverboard design; its pilot stood atop the craft as it was rolled off the pier. He attempted to jump clear of the board in midair, but failed to do so, landing face-first on the plank milliseconds after it hit the water; as EMTs circled in small boats, he remained motionless for more than a minute before being gingerly extracted from the water.

Red Bull did not acknowledge the injury or address the pilot’s condition; WTAE-TV later reported that two competitors were taken to the hospital but both were expected to make a full recovery. Nevertheless, the sight of the motionless pilot slumped over the wreckage of his craft made it difficult to laugh at the remaining teams as they hurtled towards the river; the potential for injury had been made too real. 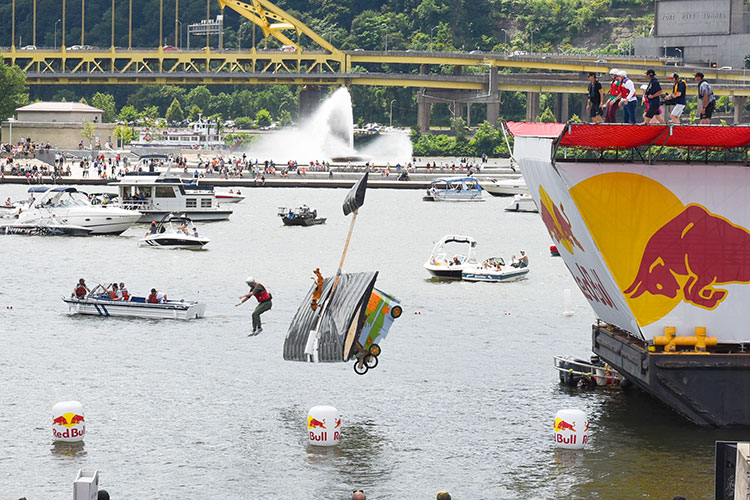 Did it ruin the event? No; the infectious enthusiasm of each team as they prepared for a moment of chaos was too infectious, and the crowd did stick around for all 37 teams. But there’s an relevant adage you may have heard of — you know, the one about fun and games. Sadly for the first Pittsburgh Flugtag, someone got hurt.