The creator of the app — which takes any playlist on your smartphone or tablet and plays it in one-minute pieces — reminds users to please drink responsibly. 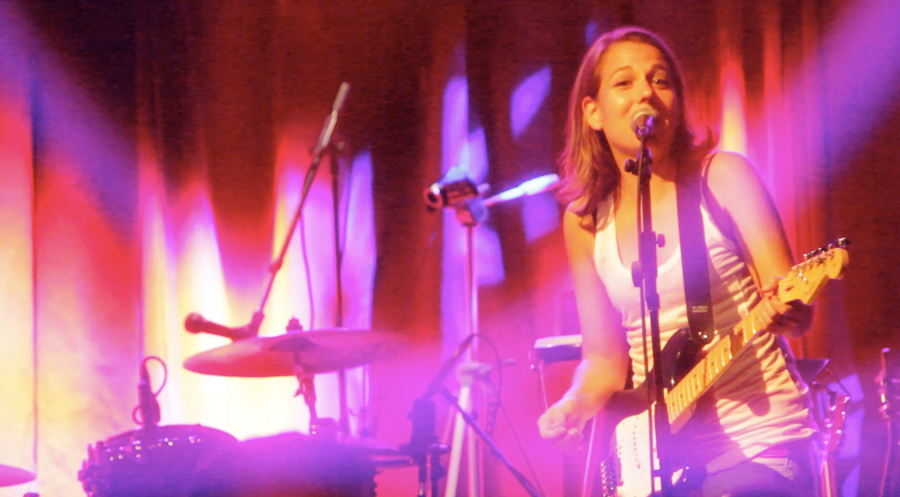 Local artist, musician and all-around rocker Ali Spagnola made unexpected waves with the release of her “Power Hour Album” in 2011. Dedicated to the ever-popular drinking game that demands participants take a sip of beer once per minute for an hour, the album consisted of 60 one-minute songs — a sort of audio timer and party disc in one.

As Spagnola marketed her music — including an ingenious version embedded in a shot glass — she was hit with an unexpected lawsuit: Someone thought they owned the rights to the phrase “Power Hour,” despite its common use since the invention of beer (we’re assuming). After a protracted legal battle, Spagnola won — and in the process, gained plenty of attention that launched her to bona fide Internet fame. (Reddit threads about the legal fight went viral, and Spagnola currently counts some 1.44 million Twitter followers.)

Befitting that legacy, she’s released an app version of the album . . . that once again is awesome and embattled. Awesome in its content: It’ll take any playlist on your smartphone or tablet and play it in power-hour format, giving you one-minute pieces of your tune to keep your drinking game (or whatever minute-by-minute activity you prefer) flowing. And embattled in that, at least on the App Store, the “Power Hour” phrase once again was a target — despite any number of apps about, concerning and covering adult beverages, that phrase violated something in Apple’s terms of service.

So if you grab the app from the iTunes App Store, it bears a slightly cumbersome title designed to separate the words: “Ali's Power Album: Hour Party Playlist Maker.” On the apparently more reasonable Google Play store, it’s simply “Ali Spagnola’s Power Hour.” The app comes preloaded with the album itself and has charted on both Apple’s and Google’s services. Bonus features include a hilarious, if treacherous, setting by which the app will automatically tweet photos of your party at regular intervals.

As always, we remind you to drink responsibly (as does Spagnola — the name of her company is Binge Responsibly, LLC). We’re willing to bet that there are plenty of other activities you could do once a minute for an hour, and this app will help with those, too. And if you do still enjoy a good drinking game now and then, there’s no finer way to party like junior year never ended.

The City of Pittsburgh announced today that it has been invited to apply for the Bloomberg Philanthropies Public Art Challenge, which will grant winning metropolises as much as $1 million over two years to support temporary public-art projects. In turn, the city invites all interested artists and organizations to apply with it as a project partner. A selection committee made up of representatives from the Mayor’s Office, City Planning and Art Commission will review all applications and make a final decision based on predetermined criteria.

According to the City of Pittsburgh’s press release, a successful project will “bring people together to experience public places in dynamic and transformative ways, demonstrate close collaboration between artists” and “establish robust public-private partnerships between local government and other funders.” The goal of the project, according to Bloomberg Philanthropies, is to “celebrate creativity, enhance urban identity and drive economic development” by creating innovating and exciting pieces of temporary, economically and technically feasible pieces of art.

Partnership applications are due on Nov. 14, and the selection will be announced on Dec. 1. Bloomberg will announce the finalists in February 2015, with winners being named in May.