Harriet Zion’s line of work in the furniture industry often ends in tears — happy ones.

The owner of Gene Sanes Upholstery in Pittsburgh’s Strip District, Zion has seen emotions get the best of many customers when they view a piece of re-upholstered furniture with special meaning to them.

“Someone will say, ‘This was my mother’s chair, and I remember when she rocked my baby in it,’” Zion says. “‘Now I’m giving it to my baby, who is a grown woman, and she’s going to have her own baby.’”

Zion, of Scott Township, says she understands the importance of family in her business. Her father, Jack Zion, owned Custom Craft in Pittsburgh’s West End, which — as Gene Sanes does today — created custom upholstered furniture.

“That furniture was so good that, even now, I’ve had clients come in here, older clients, who have a sofa my father sold them when they first got married,” she says. “And now they’re on their 50th wedding anniversary, and we’re re-upholstering the same furniture for them.”

After Custom Craft closed in the mid-1990s, Zion, who had worked with her father for years, opened the Mill End fabric shop in the Strip District. Then Gene Sanes, whose father started his re-upholstery business in the early 1900s, asked her to manage the business, which she later purchased. 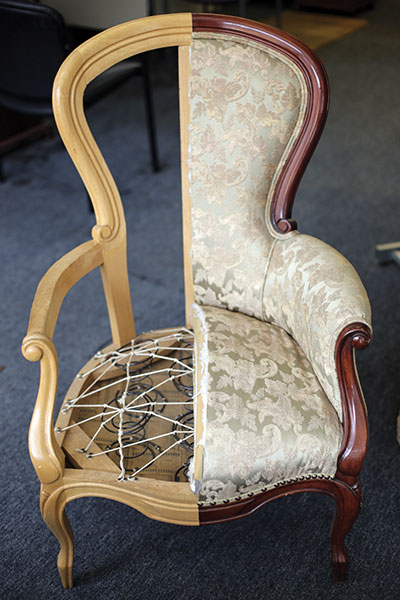 The bulk of Zion’s work involves re-upholstering furniture, including many jobs for universities and within the hospitality industry. The design center also sells and installs rugs and window treatments.

Gene Sanes’ custom creations also have found life on the big screen. The company’s master upholsterers made a specially padded train seat for the locally filmed movie “Abduction.” To Zion’s delight, they also helped to build a talking, mechanical couch in a bright-orange hue as part of an art exhibition hosted by Conan O’Brien.

This article appears in the August 2015 issue of Pittsburgh Magazine.
Categories: HOME + Design