Chess enthusiast Ashley Lynn Priore hopes to enrich the Steel City’s involvement in one of the most classic and challenging of board games. 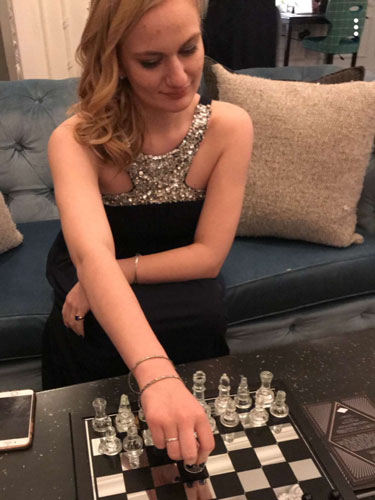 Ashley Lynn Priore is making strategic moves both on and off the chessboard.

Priore, an 18-year-old rated and awarded chess player under the US Chess Federation and a senior at the Ellis School for Girls, has two big events coming up in June. The Queen’s Gambit Chess Institute — the nonprofit she founded in 2014 — will be holding its first-ever Pittsburgh Chess Conference in early June. And Priore herself will also be speaking at TEDxPittsburgh later that month.

Priore first started playing chess at the age of 4 and is currently a board member of the Pittsburgh Chess Club and the Pennsylvania State Coordinator for the National Women’s Chess Committee. She founded The Queen’s Gambit Chess Institute in her mid-teens in order to  “seek equality in a male-dominated sport and teach chess to the community.”

The nonprofit offers an interactive curriculum that encourages mental growth in children and social, economic and political involvement through the game. Its activities involve teaching chess lessons at Pittsburgh Public Schools and the Carnegie Libraries. Individual and group sessions are offered at different times and frequencies. Private lessons tend to cost around $20, but need-based discounts and free classes are also offered.

The institute will host its first-ever Pittsburgh Chess Conference on June 1 and 2 in Oakland. An International Chess tournament for K-12 students from around the globe will be held on the first day, and an all-female tournament on the second day. City politicians have also been invited to meet with students and speak about local issues in line with the event's theme of “Connecting Communities, One Move at a Time.”

The conference will host up to 150 people and is free and open to the public. Registration closes May 31.

Priore’s tournament is the latest development in Pittsburgh’s chess culture, which also features the Pittsburgh Scholastic Chess League and Pittsburgh Youth Chess. The game first became popular in the early 1900s, when the Pittsburgh Chess Club, one of the first chess organizations in America, was developed.

Priore is also set to speak at TEDxPittsburgh on June 16 about her enthusiasm for chess and how she sees it as a vehicle for change. The Pittsburgh Cultural Trust has tickets available for the event at the Byham Theater.