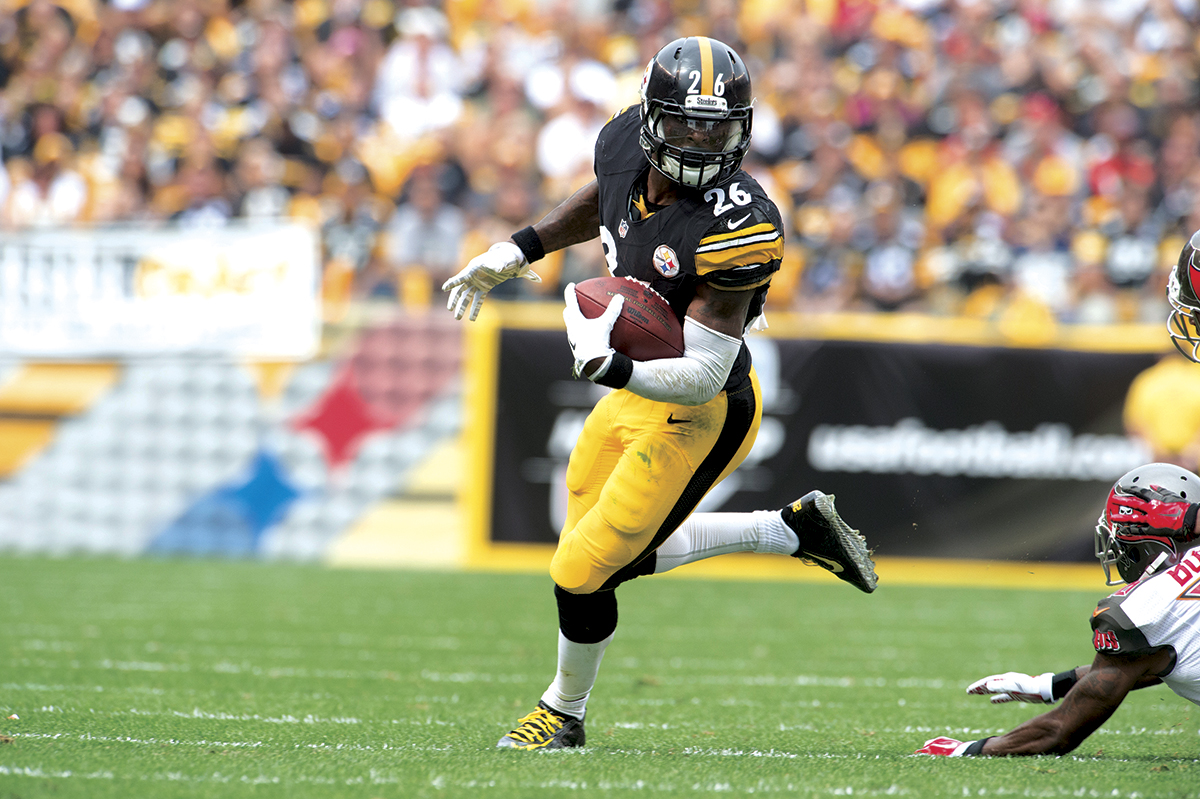 Pittsburgh Steelers running back Le’Veon Bell is chasing NFL history — and he’s spotted history a two-game head start. He intends to accomplish what only Roger Craig and Marshall Faulk have previously done.

“I’m confident I can,” Bell insists.

It’s something Bell would have to do despite sitting out the 2015 opener on Sept. 10 at New England and the Steelers’ Heinz Field debut on Sept. 20 against San Francisco, his penance for running afoul of the NFL Policy and Program for Substances of Abuse in August 2014.

Last season, Bell went on to rush for 1,361 yards and catch 83 passes for an additional 854 yards after that much-publicized lapse of judgment with former Steelers running back LeGarrette Blount while the two were on their way to catch the team plane for a preseason trip to Philadelphia.

Bell ended up being named Steelers MVP and earned first-team All-Pro honors in what became a record-setting second NFL campaign. But he’s convinced he didn’t accomplish all that he might have.

“I go out there and make a couple more plays here and there, those stats can go through the roof,” Bell maintains. 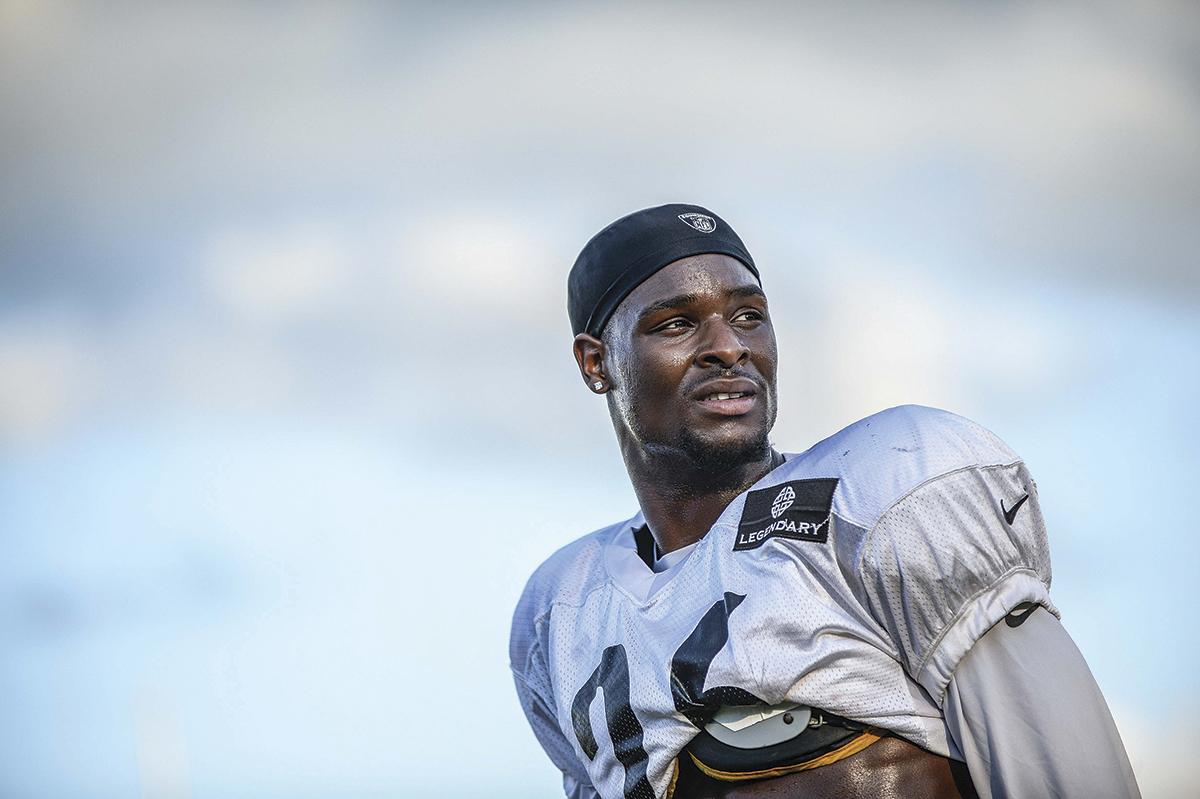 Nobody has done it since.

“Those are big numbers,” Steelers offensive coordinator Todd Haley concedes. “But [Bell’s] attitude from the day he got here has been that of somebody [who] wants to be great.

“It’s not something I’d ever say is out of the realm of possibility.”Faulk thinks such numbers are within Bell’s reach.

“I believe he can accomplish the feat,” Faulk reported during NFL Network coverage of the NFL Scouting Combine. The former player for the Indianapolis Colts and St. Louis Rams even told Bell as much prior to Super Bowl XLIX last February in Glendale, Ariz.

“Before an interview, we were talking on the set a little bit about how good [of] a back he thought I was and how he sees himself in me a little bit,” Bell recalls. “We just kind of chopped it up a little bit, and that’s when he challenged me and said, ‘I think you’re one of the backs who can get 1,000 [rushing] and 1,000 [receiving] like I did.’"

An encounter on Sept. 29, 2013, with an NFL great in London likewise resonated with Bell.

After an injury-plagued rookie training camp, the Ohio native finally was ready to play in his first NFL regular-season game.

Waiting for him that day at Wembley Stadium were Adrian Peterson and the Minnesota Vikings.

“I saw the way he was hitting the hole, how quick he was,” Bell says of Peterson. “I looked up his weight after the game; he was 217 [pounds]. His first carry he got like 6 yards, and he was like little-guy fast. He looked lean, kind of like a wideout but bigger. 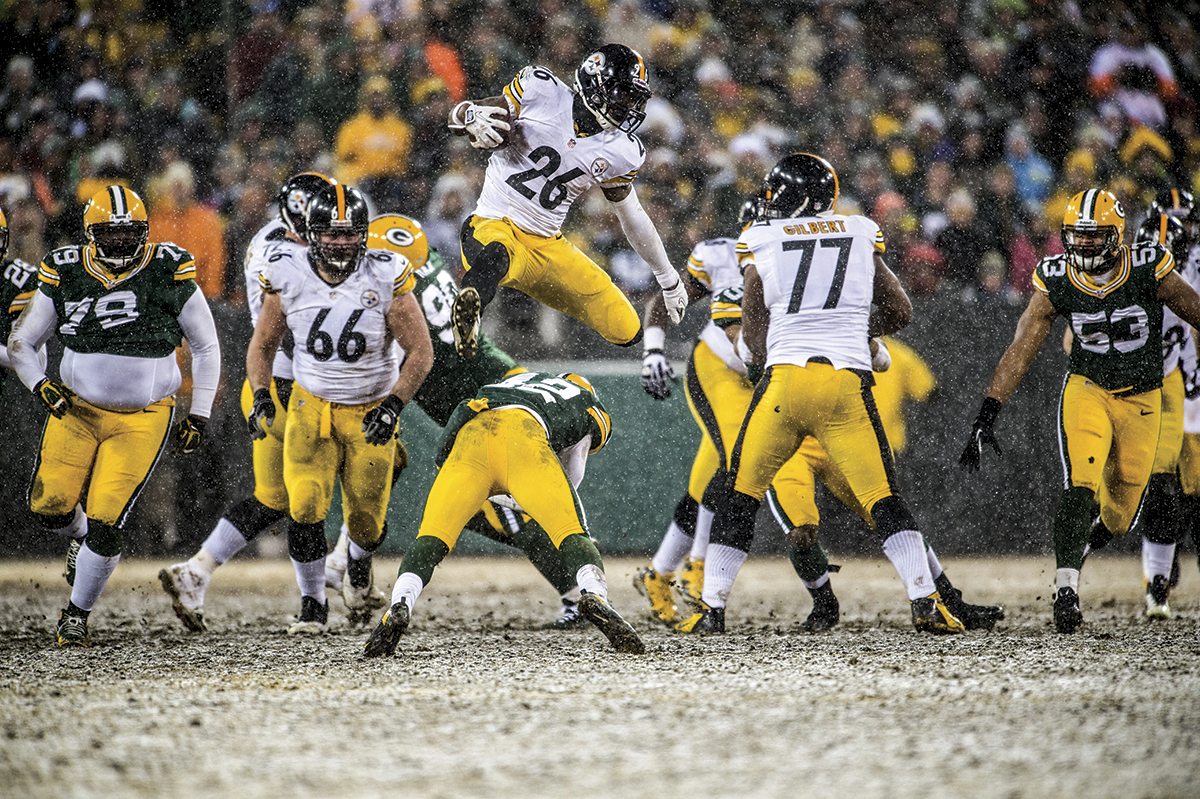 “So I’m watching him and I’m like, ‘I gotta get like that. He’s the best back in the league. He’s breaking long runs against us, doing whatever he wants. I gotta get on that level.’”

Bell has been maniacally committed to getting there ever since. The Steelers initially had wanted him weighing significantly less than the roughly 240 pounds he carried on his 6-foot-2-inch frame during his junior and final season at Michigan State University.

They envisioned in Bell what has become something of a dying breed in the NFL, a three-down back. They imagined a back who wouldn’t tip to the defense whether the offense was about to run or pass based on his presence in the game. They anticipated a back with the power to run over defenders for the tough yards inside and the wiggle and speed to make them miss in space.

The Steelers were relying on their projections as much as Bell’s on-tape resume when they selected him in the second round (48th overall) of the 2013 NFL Draft.

“That first night when we flew him in, that was the talk that we all gave him, starting with [Mike Tomlin]: ‘You need to drop 20-plus pounds,’” Haley remembers. “He’s taken it to another level the last two years. All you have to do is look at him, 2.9 percent body fat, that’s legit. He’s serious about what he’s doing.”

Bell sculpted and conditioned his way down to a sleek, chiseled 225 pounds by exhibiting a relentless dedication that’s referred to in NFL strength and conditioning circles as “working like a mine mule.”

It’s made Bell the missing link for a Steelers offense that already had Roethlisberger, wide receiver Antonio Brown and tight end Heath Miller. One that, like Bell, set multiple records last season and expects to do so again.

“I think he’s the best back in the NFL,” NFL Network analyst and former Baltimore Ravens head coach Brian Billick told WDVE-FM in the preseason.

About the only thing capable of stopping Bell and the Steelers short of injury is another suspension. Bell is resolute in his determination to steer clear of subsequent discipline.

“I learned from my mistake,” he says of his arrest last year for driving under the influence and possession of marijuana. “I know how much it hurt my family, my teammates, the whole Steeler Nation.

“My mom raised me great; she didn’t raise a bonehead kid. I know right from wrong, and I’ll learn from it and I’ll move forward from it.”

The intent is to get to a place where only Roger Craig and Marshall Faulk have gone before.

This article appears in the October 2015 issue of Pittsburgh Magazine.
Categories: From the Magazine, Hot Reads, Steelers