When it rains, it pours: 'The Umbrella Man' receives its world premiere at the Pittsburgh Playhouse and will hit the big screen, too.

Like many fathers, Lyle wants to teach his son to ride a bike. But when his son is struck dead by a young, inexperienced driver, Lyle faces a parent’s worst nightmare-the loss of an only child.

In The Umbrella Man, Lyle journeys into one of America’s darkest moments, cavorting with theorists and even attending a conspiracy convention. What begins as a therapeutic non-sequitur morphs into an unhealthy obsession. Will Lyle ever come to terms with his personal tragedy? Or will his study of the Zapruder film, a home movie taken by a spectator during the assassination, start to destroy his sense of self? 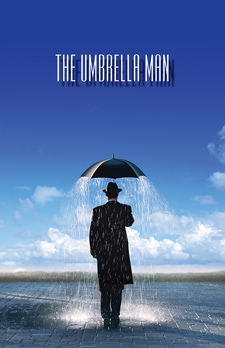 The Umbrella Man is a play receiving its world premiere this month at the Pittsburgh Playhouse-thanks to Point Park University’s professional company, The REP.

But the story won’t end there: Umbrella began its life as a screenplay, inspired by one of fiction writer Edward Delaney’s short stories. When brothers Michael and Joe Grasso penned the script in their native Los Angeles, they pictured it as a movie.

So, the Playhouse will make a movie as well. What’s more: Most of the production team will consist of Point Park undergraduates.

"When I read the script, I saw an opportunity to not only to do the play, but for our cinema department to make a real feature film," says Ron Allan-Lindblom, the Playhouse’s artistic director. "What I like about it is that the story takes place in Pittsburgh. It’s a Pittsburgh couple."

Lindblom received the script from Robert Miller, a friend and longtime collaborator who lives in California. Aside from his distinction of being legendary playwright Arthur Miller’s son, Robert has directed several stage productions in Pittsburgh, and he and Lindblom have proved themselves to be a powerhouse duo.

As is the case with many Hollywood stories, Miller met the Grasso brothers through mutual colleagues, and he was moved by what he read.

"They showed me the script and said they’d been trying to get it made for a while," recalls Miller. "I met with them, and over the course of a dinner, we found out we had a lot in common."

But the Grassos weren’t certain how best to deliver their story: as a cable movie, as a TV miniseries or as a movie of the week. "As soon as they mentioned seeing it as a play, I said I think I know a few people who could help adapt this to the stage."

Lindblom was affected by the script, too, and he found it "eminently adaptable." And as the idea gained momentum, Lindblom saw an opportunity to create a feature-film using the cinema department that is already a part of Point Park’s Conservatory of Performing Arts.

The Grassos visited Pittsburgh, toured Point Park and discussed the project with Lindblom and Miller. They decided that Miller would be a producer, having already produced film versions of Arthur Miller’s Focus and The Crucible (the latter memorably starring Daniel Day-Lewis). By March, the decision had been reached, and the quartet has worked tirelessly through the summer to secure funding and to cast the play.

At press time, the minimum film budget is expected to be anywhere between $800,000 and $1.3 million, and shooting is set to begin in November.

Filming in Pittsburgh is expected to last three weeks, which will be followed by seven to eight days of shooting in Dallas, Texas, in the very plaza where the assassination took place.

"Every time I start a big project, especially movies, I always get worried that I’ve jumped too fast, too far," Miller says. "I’m investing in it both emotionally and financially. It’s not something one does on a whim."

Acknowledging good fortune, he goes on to say, "But every time we reach for a door, it seems to open. Every time I have my doubts, the door opens wider. It’s almost like a tidal pull, with more and more support. You’d have to be a schmuck to get in the way of it."

Lindblom and Miller say that the play and film won’t be that different from one another-the brunt of the story and dialogue will likely remain the same.

Lindblom and Miller were drawn to The Umbrella Man because of its humanistic themes: trauma, healing and the aftermath of lives cut short. Although neither expects the film to become a blockbuster, the project has enthralled them since day one.

Meanwhile, the pair is looking forward to working with a mostly local, mostly student team.

"There’s a lot of things I like about Pittsburgh," Miller says of his past experiences here. "I like the talent and the people. Beyond that, though, there’s an enormous amount of support and enthusiasm for the arts and artists. It’s not as commerce-driven. I’m impressed by the number of theaters and dance companies that are supported by the community. People come out to see that stuff."

This article appears in the September 2010 issue of Pittsburgh Magazine.
Categories: Arts & Entertainment, Things To Do