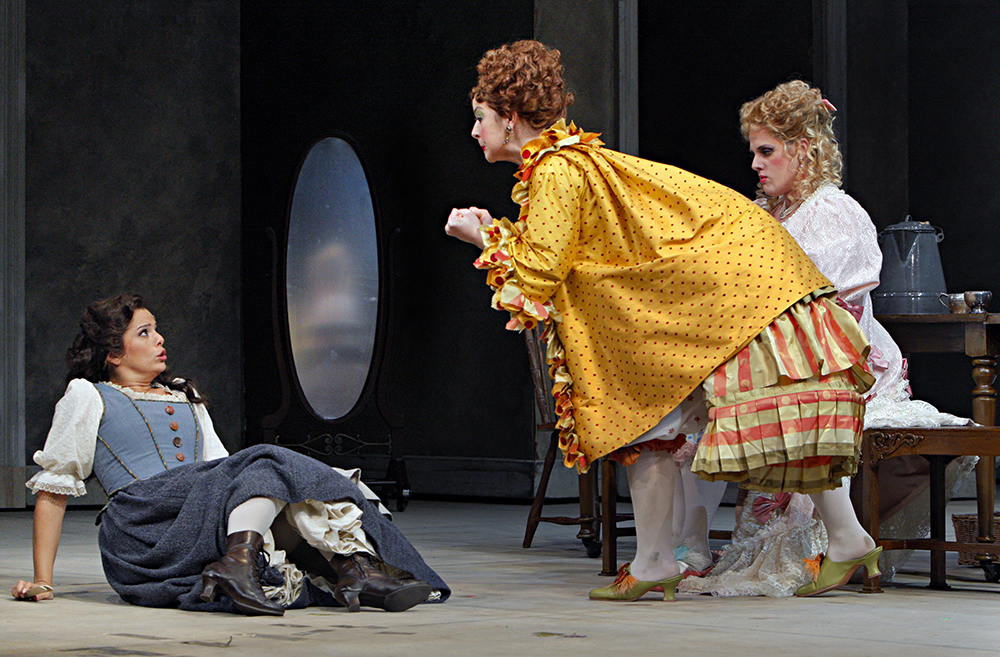 In 1816, composer Gioachino Rossini decided to adapt Cinderella, which may be the most universal of all fairy tales. Rossini was 25 years old, riding high on the success of The Barber of Seville, and he collaborated with librettist Jacopo Ferretti to create some of the most vivacious arias of classic opera.

This month, Pittsburgh Opera finishes its 2013 season with La cenerentola (lah che-nir-ayn-TOL-ah), Rossini’s version of the Cinderella tale. In a way, nothing could be more familiar, even for strangers to the opera: Everyone has heard Rossini’s music, if only in Warner Bros. cartoons — and everyone knows the story of Cinderella and her visit to the ball. But La cenerentola is not Rossini’s best-known work, and his vision of Cinderella is profoundly unique.

“We all know the Disney story,” says stage director Kristine McIntyre. “Rossini’s point is that there is no ‘magic’ in the world, just good people. The emotional story is much more real. All through it, we’re really rooting for Cinderella. Redemptive stories are a special category for me.”

Cinderella becomes Angelina. Her stepmother is now a stepfather named Don Magnifico. Her stepsisters are, instead, half-sisters. The prince and his valet exchange identities. The fairy godmother has been replaced by a wise courtier dressed like a vagrant. There’s no slipper; rather, a bracelet. (According to lore, showing a woman’s bare foot in early 19th-century Italy was considered scandalous.)

“I think it’s magical and charming,” says Christopher Hahn, general director of Pittsburgh Opera. But he clarifies that it’s “magical” in a humanist way; instead of talking mice and pumpkin coaches, La cenerentola is about kindness prevailing over cruelty.

“Along with everyone, you root for the underdog. We know how little girls love the story because they want to marry the prince,” says Hahn, “but I think all of us dream of escaping the chrysalis. The magical quality is that it is within our grasp.”

Pittsburgh Opera has enjoyed enormous success in recent years. The company’s Strip District headquarters is a colossal renovated factory. It draws artists from all over the world. And while Pittsburgh Opera focuses on big and classical productions, its oeuvre has become recognizably diverse: This season included Puccini’s tragic Madama Butterfly, Mozart’s iconoclastic Don Giovanni and Cimarosa’s screwball Il Matrimonio Segreto.

The heart of Pittsburgh Opera (and opera in general) is the music, and La cenerentola offers a singular combination of comic characters and an epic, romantic score.

“I’ve always been drawn to the bigness of [operatic] storytelling,” McIntyre says.

McIntyre, a Philadelphia native who now lives in Portland, Ore., has directed traditional stage-plays and dance recitals, but her forte is opera. She notes that opera performers behave differently than stage actors; they are more preoccupied by singing than complex character motivations. “In general, actors ask why, and singers rarely do. But singers are willing to try anything once.”

“One of the hallmarks of Rossini,” says music director Antony Walker, “is his ability to combine commedia and buffo with virtuosic singing. On paper, it looks simple. But it has an Italian oomph to it.”

Talking with Pittsburgh Opera’s team, it’s clear how enthusiastic each member is about their art form — as well as each other. They speak with rare eloquence about opera and its nuances, and they are gracious about each other’s work.

McIntyre and Walker originally met years ago while collaborating on a small-scale production of (what else?) La cenerentola.

“The relationship between a stage director and music director can sometimes be quite tricky, but Kristine and I love working together,” says Walker, who has served as resident artist at Pittsburgh Opera for years. “Her sense of humor and my sense of humor are quite similar. We love good physical humor, and we love good intellectual humor.

“She loves timing things [on stage] to what is going on with the orchestra. This is my third contract with Pittsburgh Opera, and it’s because I love the company; it’s a dedicated community. Sometimes when you have larger companies, people are reluctant to enjoy it. But at Pittsburgh Opera, there’s a sense of fun and enjoyment to it.”

This article appears in the May 2013 issue of Pittsburgh Magazine.
Categories: Things To Do