The North Side-based nonprofit has partnered for the first time with local health agencies to provide a mobile clinic to help with eye and diabetes care. 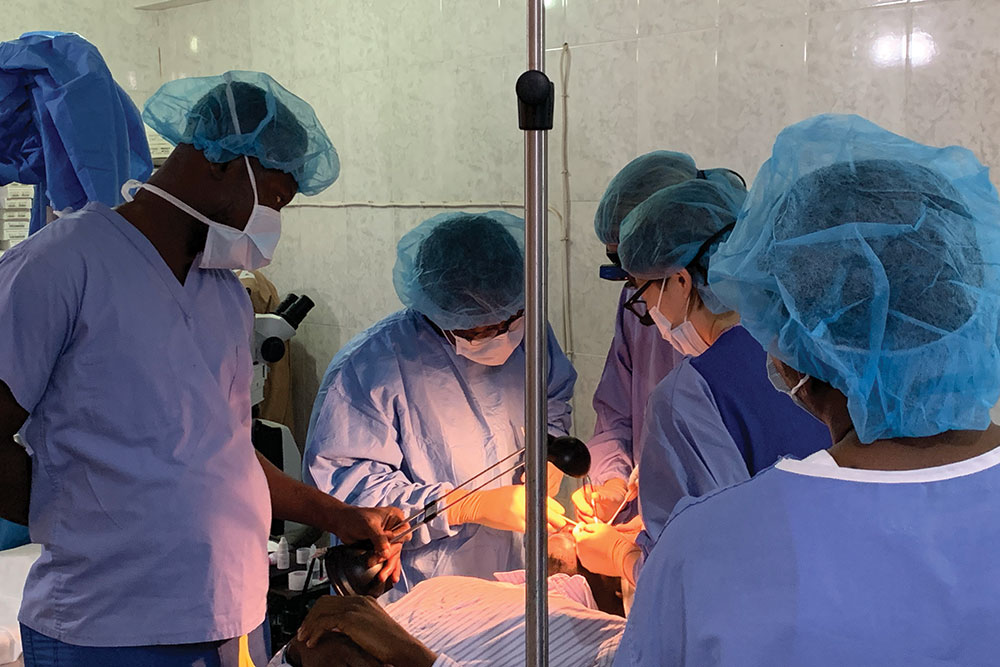 For nearly 65 years, Brother’s Brother Foundation has stepped in to help people around the world ravaged by war, disease or environmental catastrophes.

Focusing on creating sustainability, the North Side-based institution offers those in need essential resources and education so they can eventually thrive independently.

Dr. Robert Hingson, a pioneer in public health who held various positions at the University of Pittsburgh School of Medicine and local hospitals, founded the nonprofit in 1958 by providing vaccinations and inoculations to underserved communities worldwide. According to Ozzy Samad, foundation president, BBF continues Hingson’s mission through relief shipments and programmatic work.

“Brother’s Brother works in four areas: health care, infrastructure, disaster response and education,” Samad says. “That spells out H.I.D.E. — so my running joke is that you can run from BBF, but you can’t hide.”

And for the first time on June 24, BBF partnered with Highmark Wholecare, Allegheny Health Network and Project Theia, a private, nonprofit clinic, to provide a mobile health van to increase access to underserved communities. It focused on providing care for unmet eye needs, including diabetes eye care and other assistance. The clinics have been held in Braddock and New Kensington.

Helping Ukraine has been another major focus of BBF this year; however, the needs there are a bit different from those in other countries. “It was a very specific needs list based on wound care,” Samad says. “We had one item [on the list]. Normally we have a lot of stuff, but this was very specific to wound care.”

BBF connected with Audrey Russo, CEO and president of Pittsburgh Technology Council, who was in contact with the commercial officer of the U.S. Embassy in Ankara, Turkey. Russo gave BBF the Ukraine needs list, which included negative pressure wound therapy systems, prosthetics clinics/rehabs and psychological assistance.

Russo connected BBF with David Holmberg, CEO and president of Highmark Health, to help fill the list and get the supplies into Ukraine, which was difficult because of the Russian attacks.

“Fundraising now, because of all the support we’ve gotten from the communities, is over $3 million. Our original target when we started off was $250,000,” Samad says. “All of it is being used to help people in Ukraine one way or another.”

To support all of these services, BBF relies on donations from individuals, hospitals and pharmaceutical companies.

As part of the infrastructure program, BBF provides grants to organizations to help fund installation of solar panels on clinics in Puerto Rico and countries such as Liberia and Ghana. The solar panels provide uninterrupted power to clinics, allowing refrigeration of medicines so health care workers can continue caring for the sick.

Infrastructure also includes WASH, which is a program referring to water, sanitation and hygiene. This includes providing reusable and washable menstrual products to girls in Latin America as well as installing handwashing stations and private bathrooms at a school in Guatemala.

“Eventually what we’d like to do is send the sewing machines over so the communities can make their own pads, then we’re not necessarily doing it,” Samad says. “So it all goes to the sustainability aspect of things.”

Disaster response includes providing aid to people who have been affected by environmental disasters such as wildfires in California, hurricanes in Texas and Puerto Rico and earthquakes in Haiti. BBF provides medical shipments, which include hospital beds, chairs, food and pharmaceuticals.

Lastly, in education assistance, BBF supports teachers by providing them with textbooks and other supplies.

“Our mission statement talks about bridging the gap,” Samad says. “The idea is for us, when we send medical equipment and supplies, is to send what is needed now, but our ultimate goal is for them to become self-sufficient so they can purchase whatever it is that they need.”

In the future, BBF hopes to fund more mobile clinics to help the local community. Pittsburghers can sign up through their website to volunteer to assemble hygiene kits and sort through donated supplies.

“Being able to be in a position to help other people — there’s literally no downside to it,” Samad says.