The 15-story Park Building and the 14-story Carnegie building went up in the the late 1800s just a block away from each other Downtown. Today, only the Park Building still stands. 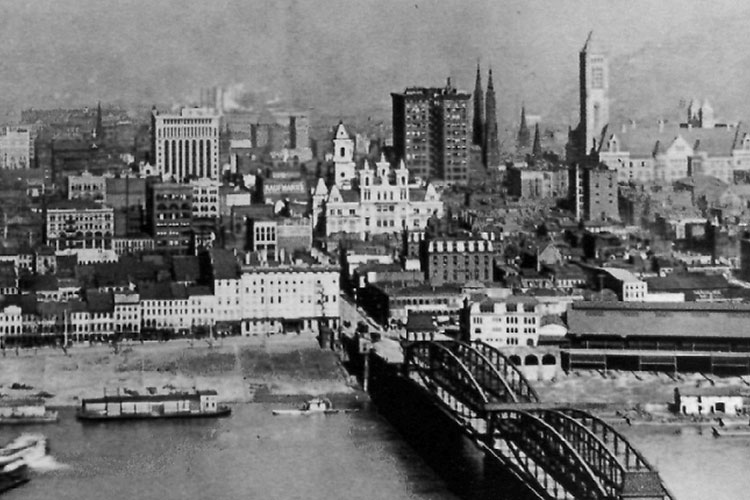 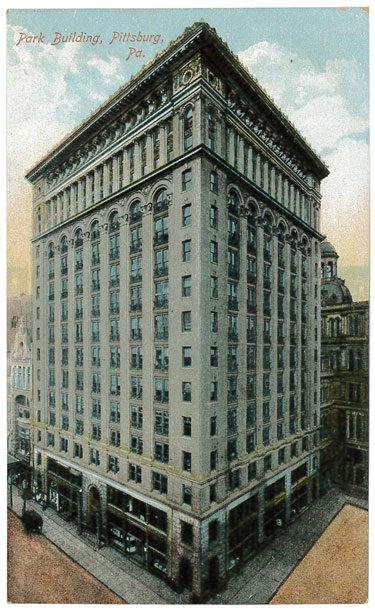 In the closing years of the 19th century, when Pittsburgh got its first two skyscrapers, both bore the names of steel magnates. The Carnegie Building and the Park Building were marvels of their time, both office towers soaring to 200 feet above Fifth Avenue on metal skeletons, with banks of newfangled elevators in their lobbies. But today only the skyscraper with the less famous moniker survives.

The 15-story Park Building, on a prime parcel at Fifth Avenue and Smithfield Street, went up in 1896 (a year after the Carnegie Building opened a block away). It has outlived the 14-story headquarters of Andrew Carnegie’s steel company by 66 years, albeit with substantial plastic surgery; the windows originally featured iron scrollwork and retractable awnings and the rear side, once open to admit light to the interior court, was later filled in to create more rentable square footage. Classical details remain, however, including the 30 kneeling atlases hoisting the roof on their shoulders. 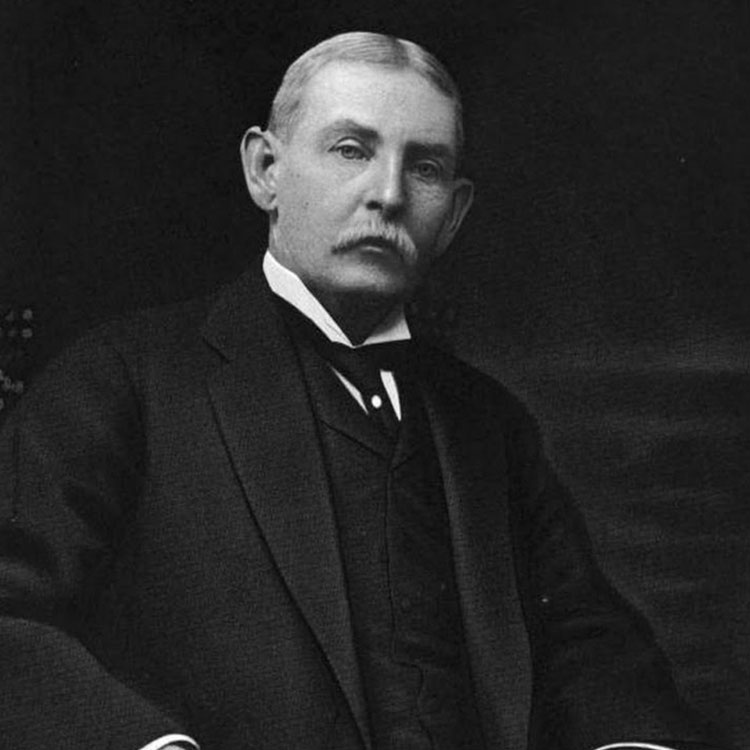 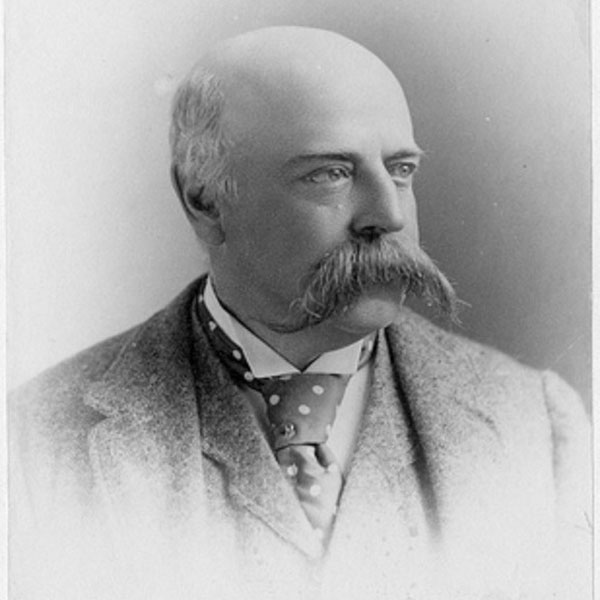 Park inherited Black Diamond Steel Works from his father, James, who founded the factory at 30th Street in the Strip District. The Parks were in a different business from Carnegie; Black Diamond made crucible steel, a high-strength grade industrially forged by pounding with massive steam hammers (Black Diamond’s biggest hammer weighed 17 tons). Crucible steel was used for cutlery, scissors and piano wire. It was strong enough for the firebox plates of locomotive engines as well as the tools that mills such as Carnegie’s used to cut and shape hot steel rails and beams. In 1900, David Park merged his company with competitors to form Crucible Steel.

For his skyscraper, Park hired the celebrated New York architect George B. Post, who was fresh off the success of designing the enormous (but temporary) Manufactures and Liberal Arts Building at the 1893 Chicago World’s Fair. It would be an awesome sight even today, the length of two Heinz Fields. 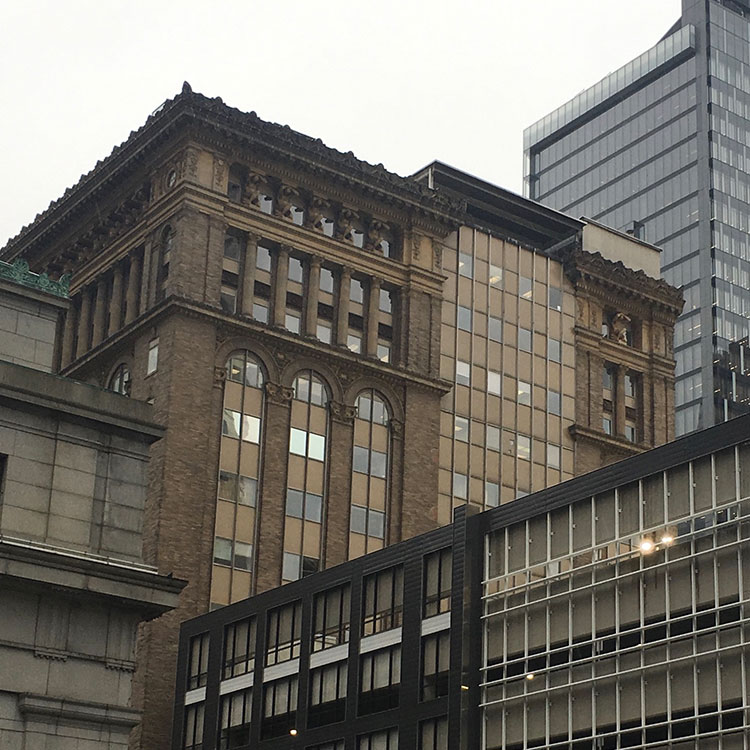 Safety measures on the Park Building construction site were lacking. The first fatality occurred when a carpenter was crowded off a ladder amid the rush of the 5 o’clock whistle; he fell from the 11th floor stairwell to the new tile nine stories below. Later, a plasterer plunged three stories down a shaft. A third man was killed trying to exit a temporary freight elevator on the 15th floor as its pulley snapped.

The Park Building has been in steady use for well over a century, with a series of owners taking over since the family estate sold the building in 1958. Its current owners, E.V. Bishoff Co., bought the building in 1994. Ground floor tenants were once far ritzier than the McDonald’s and phone stores that currently occupy the Park Building’s streetfront level. 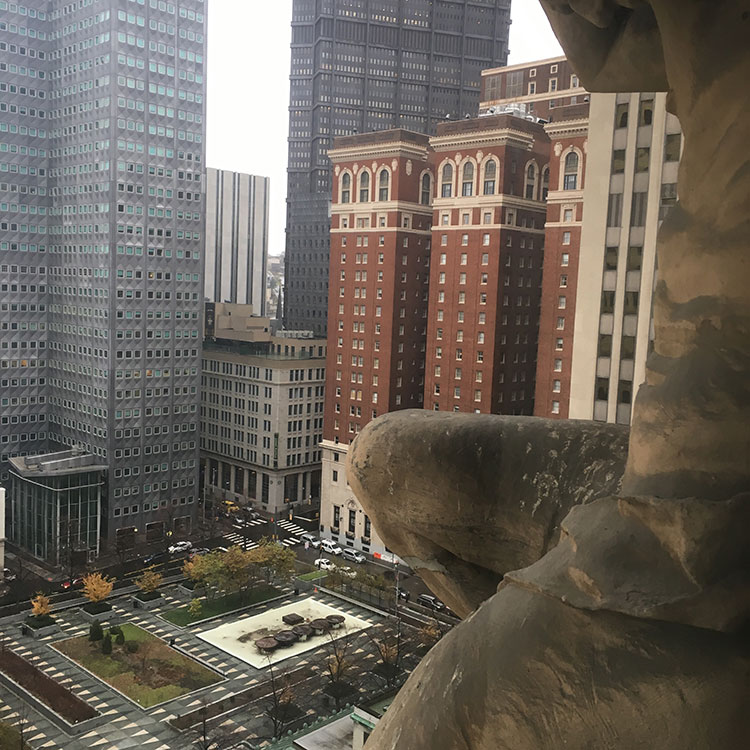 Trimmed ladies’ hats at Danziger’s Millinery were “the loveliest that the art brains of the fashion world have created,” according to an announcement of the store’s grand opening in 1896. The restaurant Childs promised “succulent bivalves fresh from the oyster bar” in a 1931 ad, as well as “afternoon tea served by dainty maids.”

This article appears in the February 2018 issue of Pittsburgh Magazine.
Categories: Community Feature, From the Magazine, Hot Reads