Working at two part-time jobs (one in digital strategy aiding nonprofit organizations, one at Children’s Hospital), Noelle Conover’s life adds up to a full-time commitment to philanthropy. 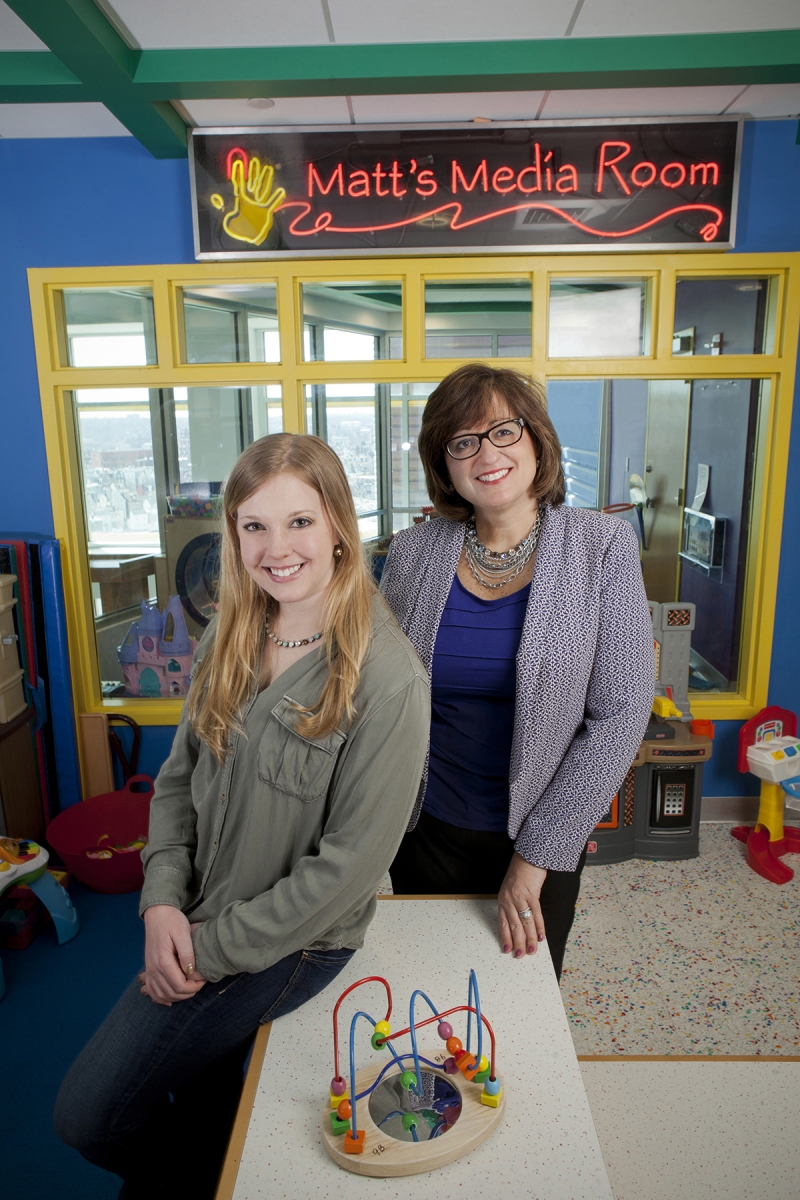 Noelle Conover (right) and Merel Duursma, a brain tumor survivor and nurse at Children’s Hospital of
Pittsburgh of UPMC, who has become an ambassador for the Survivorship program.

At Children’s Hospital of Pittsburgh of UPMC, Noelle Conover has been a mother of a patient, a volunteer, a donor and most recently an employee.

Conover is the project coordinator for SurvivorConnect, part of the Survivorship program at the hospital that provides support and education for more than 400 pediatric cancer survivors and their families, as well as their post-cancer physicians who may not be familiar with their case histories.

It’s a job that’s very personal to her: Her son Matt, who was diagnosed with non-Hodgkin’s lymphoma in 2001, was treated at Children’s before he died in 2002.

“When our patients come in and we’re talking to them, a lot of times moms and patients will look at me and say, ‘You don’t have any idea what we’ve been through,’” Conover says. “I just think, ‘I do have an idea of what you’ve been through.’ And that’s why I love my job so much. I feel like this journey we went through with my son makes me so much more empathetic with our patients.”

Her other day job is director of digital strategy at Enwhorl, Inc., a startup company in Mt. Lebanon that works on digital strategies, websites and brand development for other startups and nonprofit organizations such as Jeremiah’s Place, a crisis nursery in East Liberty.

“I’m a philanthropist, and that’s how I like to think of myself,” says Conover, 55, of Mt. Lebanon.

Her husband, David, is the chief technologist at Canonsburg-based global software company ANSYS — he was one of the company’s original employees. They also are the parents of Megan, 27, a nurse who was inspired by her brother’s caretakers at Children’s; Alex, 22, a college student; and Anna, 15, who attends Mt. Lebanon High School, where the family established the Matthew Conover Memorial Scholarship.

“We’re trying to foster philanthropy in them,” Conover says.

What are some of the causes you’ve funded at Children’s?
People wanted to raise money [after Matt died], so we started a cause called Matt’s Media [which] initially provided gaming equipment to the hematology/oncology departments … There are three Matt’s Media rooms now — one in Children’s, one in Our Clubhouse — formerly known as Gilda’s Club — and one in his old elementary school [Foster Elementary in Mt. Lebanon] so that kids would be able to create technology.

Tell us some of the other causes you’re involved with.
Do you want a list? [laughs]. We do a lot with [Mt. Lebanon Evangelical Presbyterian Church]. We run a program every summer called Mission Possible, and it’s a week where [more than] 300 volunteers in the church give back their time, and we go out into the community and do different projects … We also started a fund at The Pittsburgh Foundation in Matt’s name called the Matthew Conover Memorial Fund … I’m just a professional volunteer, I think. I am also on the board of the Robert Morris University School of Nursing.

How did the Survivorship program start?
In 2008, Dr. [Jean] Tersak [who appears in our “48 Life-Changing Hours” feature] started the program, and she and a nurse-practitioner started seeing patients. What they decided was [that you may] cure patients of cancer, but these kids, even though they’re cured, still have a lot of needs in terms of the late effects of treatment. A lot of these kids have been treated with chemo, radiation and surgery, and all three of those [treatments] have side effects … We found nobody was really following these up. In 2011, we got a grant from Hyundai Hope On Wheels … and that’s how we started SurvivorConnect.

What kinds of follow-up do you do?
Patients are followed from the time they’re off treatment until they are of an age where they’re ready to transition in life, usually post-college. We’ll help them transition to a primary-care physician because we’ve been keeping records. A lot of these kids didn’t even know what treatment they had — a lot of them were treated when they were [as young as] 2 or 3 years old … What we’re finding in the medical community [is that primary-care physicians who] went to medical school 20 years ago — 20 years ago kids were not surviving cancer. [Doctors] aren’t going to know what extra tests to look for, and they’re depending on a group like ours.

Were you always interested in philanthropy or more so because of Matt?
I’m the daughter of a social worker. Giving back has always been in our blood, that’s just how I was raised, so I just feel it’s an honor to give back. So many people say, ‘How can you go on after you have such a terrible loss?’ and for me it’s the only way I can go on. I found the key to not being bitter and angry is to see the good you can do. And I get to do it in his name a lot … I’m selfish; I want to tell people about him, and I get to.

This article appears in the May 2015 issue of Pittsburgh Magazine.
Categories: Arts & Entertainment

Pittsburgh Pet of the Week: Huck