Pittsburgh is Witnessing The Colonial Era

With nationally recognized basketball and hockey programs leading the way, Robert Morris University is staking its claim as a budding athletic powerhouse. 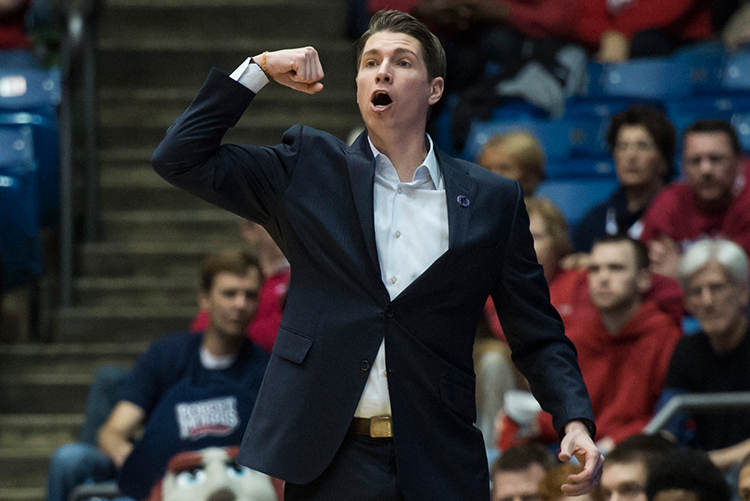 Robert Morris University Athletic Director Craig Coleman got a thrill each time he witnessed The Speech. Former university President Gregory Dell’Omo regularly would engage members of captive audiences at town hall or board of trustees meetings by asking them to raise their hands when he mentioned a university with which they were familiar.

He’d start with an obscure college on the East Coast. No reaction. Next would be a small school on the West Coast. Again, nothing.

Then, Dell’Omo would spring it on them: Gonzaga. Hands everywhere.

“That school is no bigger than the others he would bring up,” Coleman says. “So why did everyone recognize it? Because of the highly successful basketball team. Good athletic programs can open the doors for smaller universities.”

Robert Morris is proof. The ever-expanding institution has experienced unprecedented athletic prosperity in the past decade. Its basketball and hockey programs provide the firepower, but sports such as soccer, golf and softball also make it cool to be a Colonial.

“We’re on the map — big-time,” says Karvel Anderson, who starred on the basketball team from 2012-14. “And it just keeps getting better.”

Trips to NCAA tournaments have become commonplace for the 5,358-student school in Moon Township. The men’s and women’s basketball teams each have been to the Big Dance three times since 2005; men’s soccer made a trio of appearances between 1993 and 2005. Men’s hockey, men’s golf and women’s softball each have qualified once. 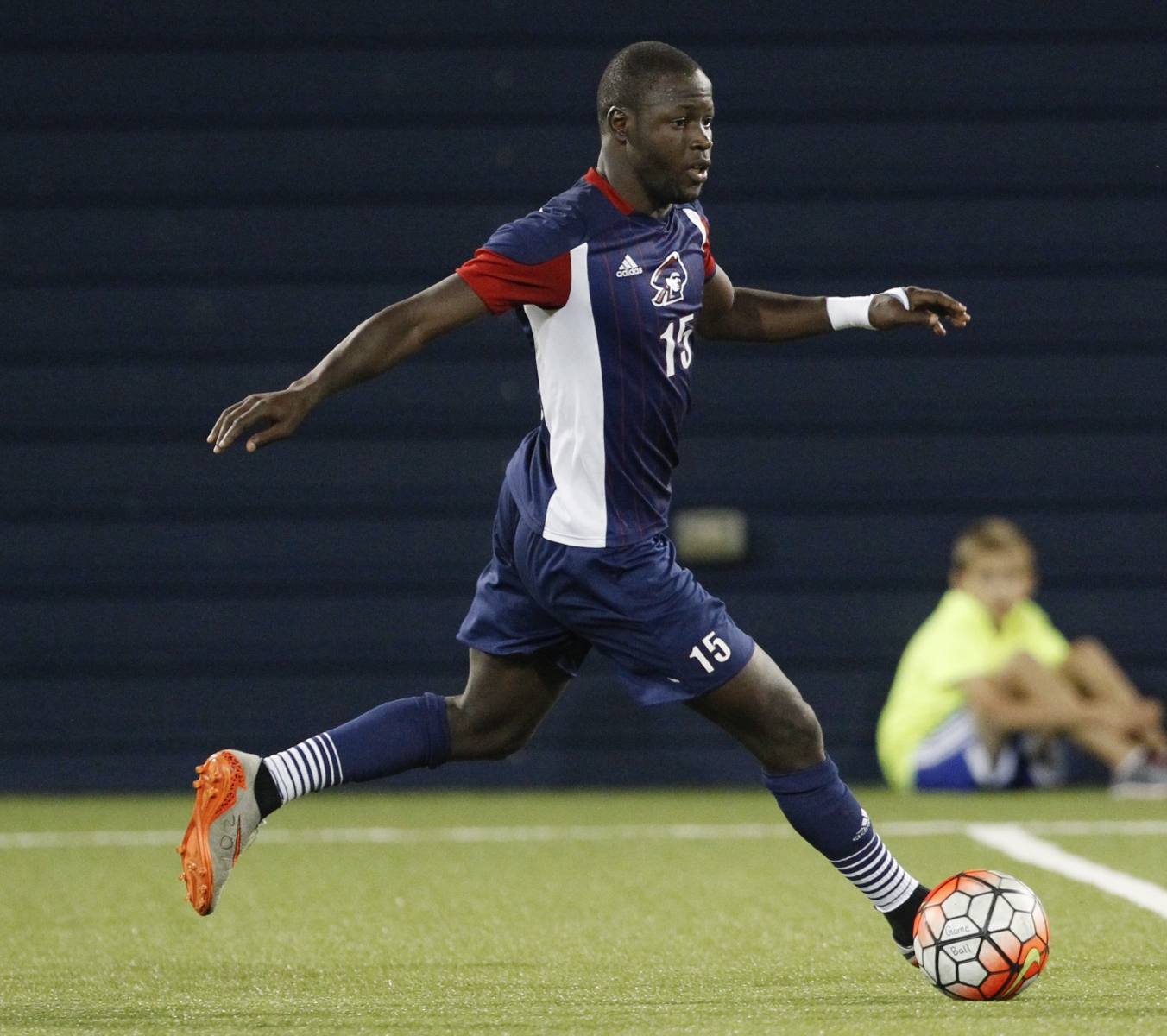 The men’s soccer program boasts the NCAA’s No. 1 scorer from 2013 in Neco Brett; women’s hockey gives Robert Morris the distinction of being the only school in the Pittsburgh area with Division I men’s and women’s teams. The football program, which competes in the Division I Football Championship Subdivision (the second tier of NCAA football), is looking to re-establish the dominance it exhibited during the Joe Walton era. Walton was the winningest coach in Northeast Conference history, capturing six league titles from 1994-2013. Former Pittsburgh Steelers defensive lineman John Banaszak is in his second season as coach.

Not coincidentally, the emergence of athletics has dovetailed with the evolution and transformation of the university overall. In what is referred to as “The Dell’Omo Decade” — Dell’Omo left in August for a similar position at Rider University in New Jersey — RMU has gone from being a commuter business school to a comprehensive, residential university with nationally acclaimed degree programs across five academic schools. Full-time undergraduate enrollment grew 35 percent and residential enrollment climbed a staggering 75 percent from 2005-15. The university completed two new academic buildings, added three residence halls and completed a record $41 million capital campaign. The school now is in the midst of a fundraising initiative for a new convocation center. 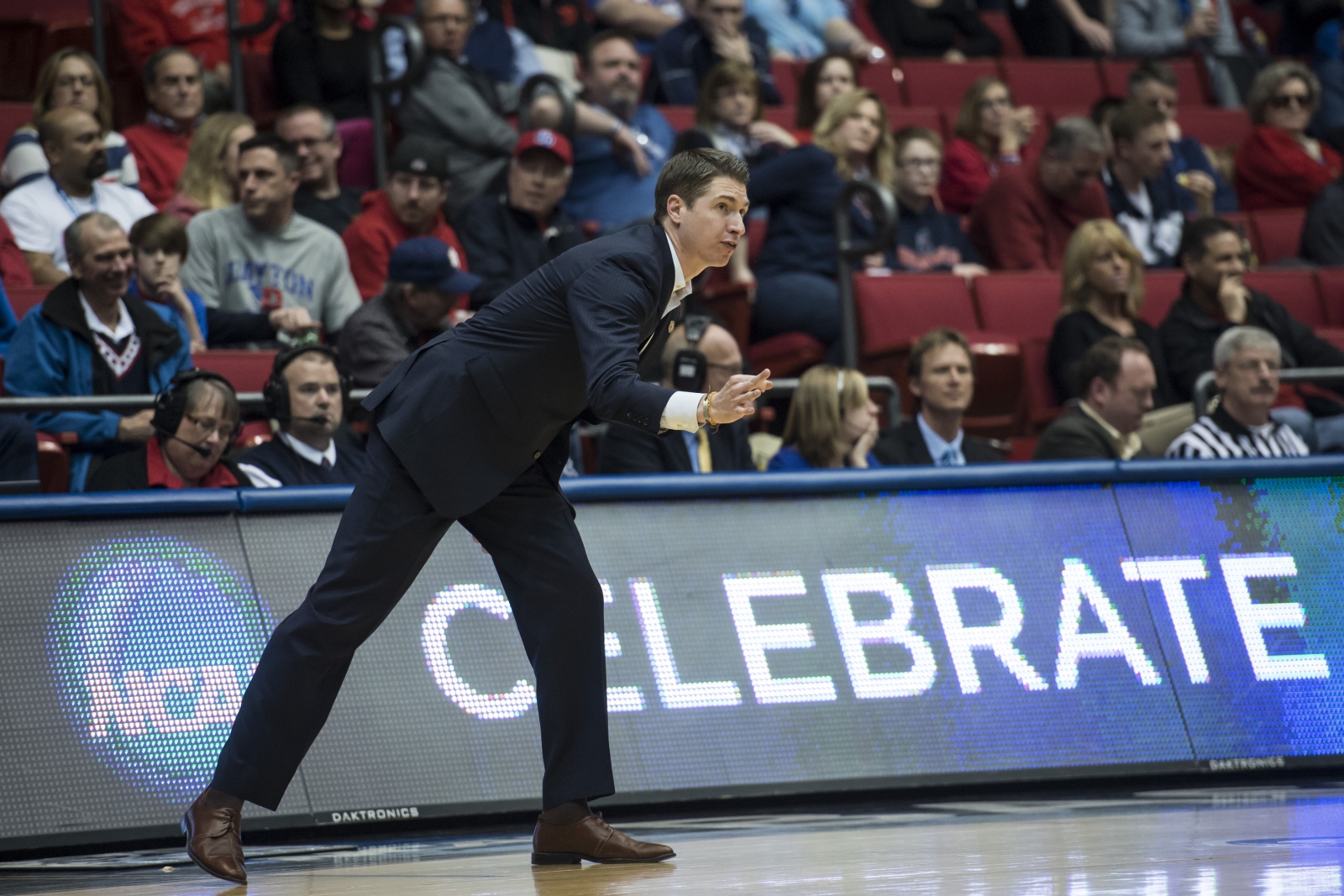 Basketball coach Andy Toole is the most recognizable personality on campus. He displayed his fiery and contagious demeanor for a national television audience this past March after leading the Colonials to their first NCAA Tournament win in 32 years — an 81-77 victory over North Florida in a First Four matchup. RMU lost in the second round, 85-56, to eventual national champion Duke.

​Toole is an Ivy League-educated basketball junkie who’s equal parts maestro and madman in coaxing greatness out of his players, At age 35, he’s among the hottest young coaches in college basketball. His five-year record of 110-65 entering the 2015-16 season features a still-stunning upset of then-defending national champion Kentucky in the first round of the 2013 National Invitation Tournament and two Northeast Conference regular-season titles.

He received a contract extension in the offseason that runs through 2019-20, yet his name continually is linked to job openings. He says he doesn’t like it.

“I understand the rumors — and it is a compliment to our program, to our kids and to our staff that people recognize our success,” Toole says, sitting in his office at RMU’s basketball facility, the Sewall Center. “But people don’t know the vision and direction that we have for this program … We have a lot more to do here at Robert Morris.” 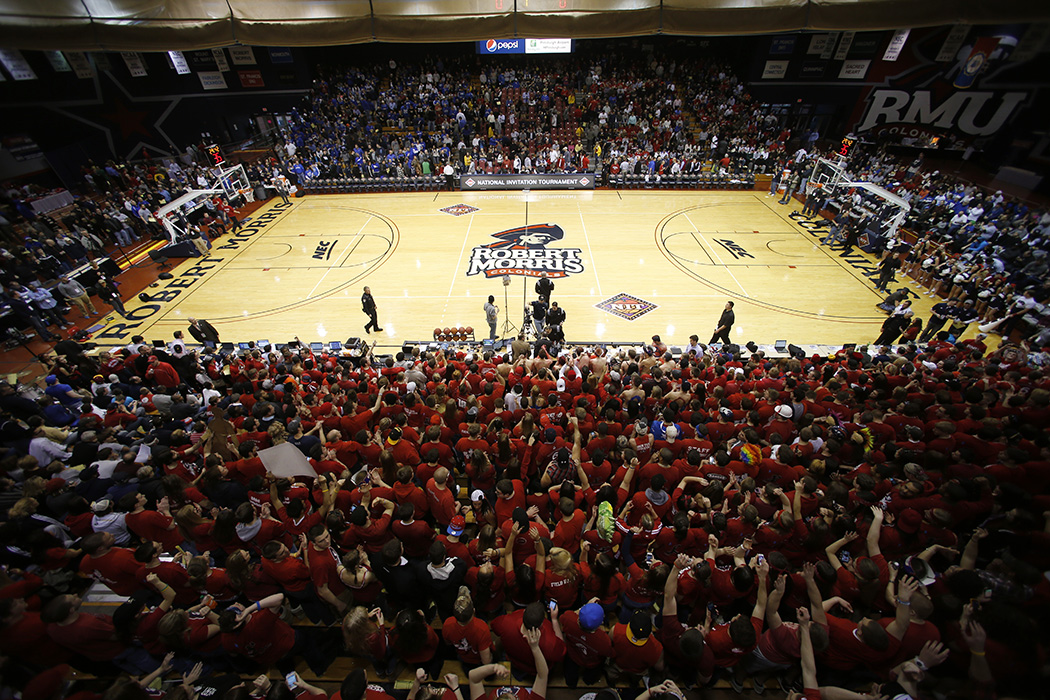 The Sewall Center was packed on March 19, 2013, when Robert Morris upset Kentucky

The exposure basketball provides is invaluable to a mid-major university such as Robert Morris. Millions encountered the name in March by filling out NCAA Tournament brackets, watching the ESPN crawl or joining discussions over social media. RMU men’s basketball has been to the Big Dance three times in the past six years and eight times overall.

“We couldn’t afford [to buy] the advertising we get when we play in the tournament,” says Coleman, who downsized from 23 to 16 sports last year in an effort to offer better focus on the remaining programs.

“The best part about all of this success is that we’re in it together,” says men’s hockey coach Derek Schooley, who founded the program 12 years ago and guided it to its first NCAA Tournament in 2014. “When one program does well, it impacts the rest of the athletic department.” 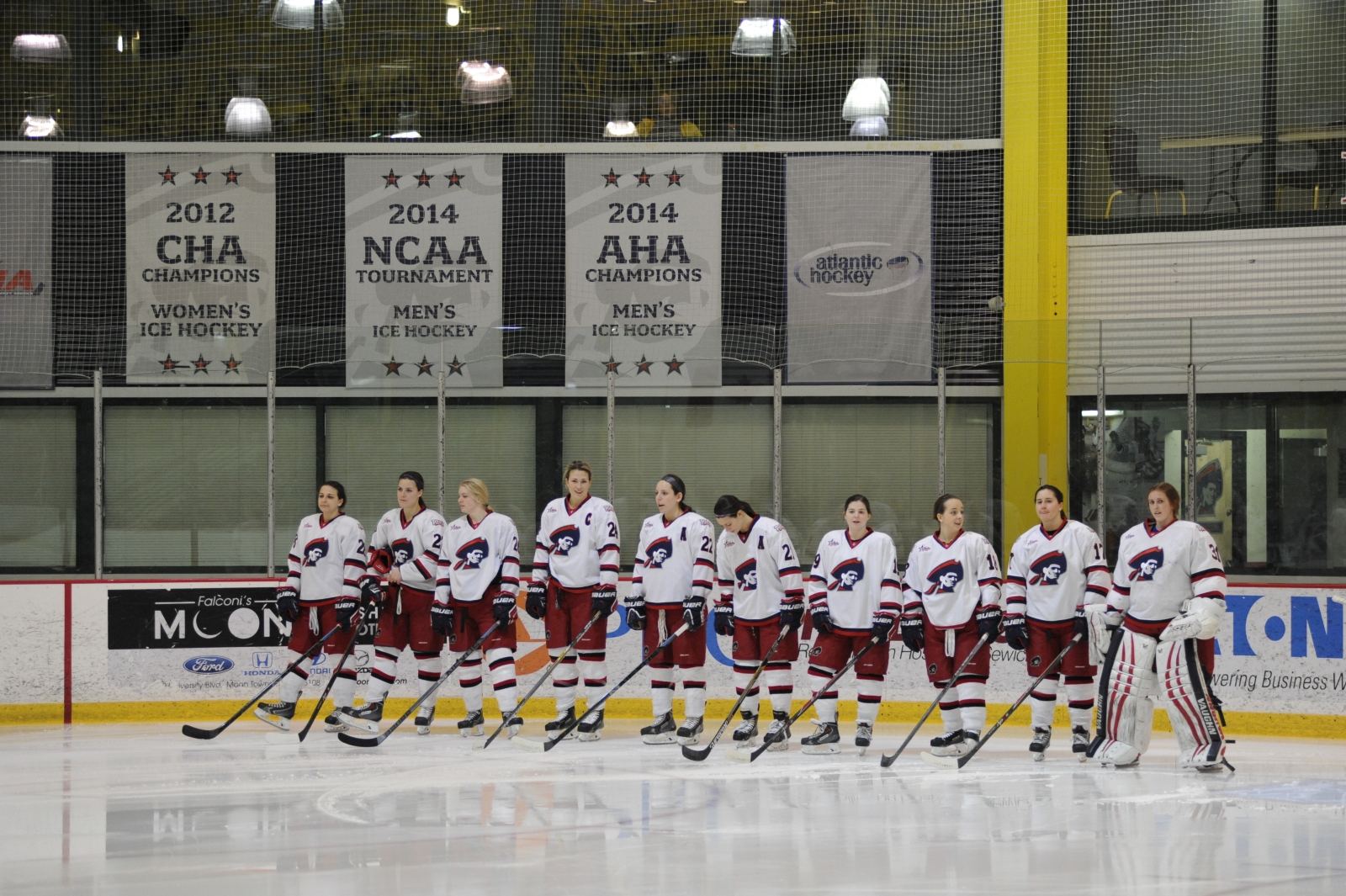 The Robert Morris women’s ice hockey team, the only Division I women’s team in the Pittsburgh area.

Of the successful teams at Robert Morris, hockey, arguably, has the best chance at a national championship. Unlike basketball and football — where traditional powers dominate — the past three men’s hockey champions have been Yale, Union and Providence. Schooley oversees an established program (the Colonials had a record-setting 24-8-5 record in 2014-15, barely missing the NCAA Tournament) that plays in the $20 million, 1,200-seat 84 Lumber Arena on Neville Island. In the past eight years, he has engineered upsets over the Nos. 1, 2 and 3 teams in the nation.

“Athletics and academics feed off of each other. They go hand in hand,” Coleman says. “We’ve been fortunate to watch it prosper right here at Robert Morris University.”