Pittsburgh is Not Boring

... And four other outdated falsehoods that need to be cleared up right this instant. 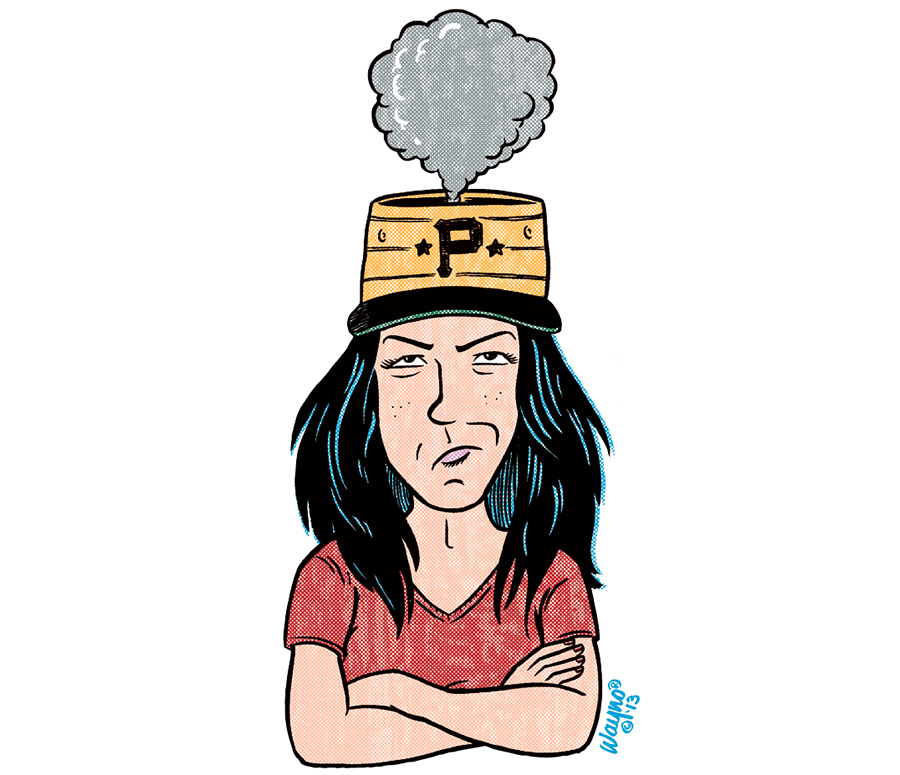 If you type “Pittsburgh is” into Google, it will, like an enthusiastic slipper-fetching dog, proactively suggest “Pittsburgh is art” or “Pittsburgh is irate.” Clicking on that second option takes you to the website for a line of shirts that show we aren’t cool with 20 years of losing baseball. We’re mad, and we’re not gonna take it. Unless it’s Free Shirt Friday at PNC Park — then we’re gonna take it.

Google will also suggest you try “Pittsburgh is a dump,” “Pittsburgh is boring” or a variety of other unpleasant statements entered by the sort of individuals who regularly type “Crosby crybaby” into the search box.

Let’s forget about what Pittsburgh is — and what Sidney Crosby is (the only man on earth who remains gorgeous while sporting mangy patches of facial hair and missing his front teeth) — and let’s talk about what it’s not.

Pittsburgh is not “smoky.”
Despite just about every national newspaper, magazine or blog referring to the city’s past as if soot-filled skies were a heavy blanket over our skyline three years ago, not three decades ago, our air is no longer smoky. Our rivers aren’t lined with smokestacks spewing material more toxic than whatever Donald Trump is saying on Twitter. Smoke doesn’t cloud our view of anything except the last 20 seconds of a particularly epic Zambelli finale. Our air quality is improving yearly. Skies are blue in Pittsburgh. “Smoky?” Here’s a thesaurus. Pick a new adjective.

Pittsburgh is not Primanti’s.
Or rather: “Pittsburgh is not just Primanti’s.” That local bite gets the most attention; it’s the food ex-pats pine for longingly. Pittsburgh is more than french fries and coleslaw. Pittsburgh is also made-from-scratch, sustainable and farm-to-table. Lazily summarizing the totality of our eclectic and delectable food scene with one fries-stuffed meat sandwich is a disservice to the nationally recognized local chefs serving up cutting-edge cuisine in kitchens that are at least three blocks from the nearest fried potato.

Pittsburgh is not jorts.
Sure, we’re going to judge you if you wear a belted dress with 3-inch heels to a Penguins game and your name is not Nathalie Lemieux. Yes, some of you have “dress jorts” and “church Steelers jerseys.” Yes, we dress for comfort when we can, and sometimes that means spandex … Wait. What was I defending here? Sorry. Anyway, Pittsburgh is moving up in the fashion world. Fashion blogs and trendy boutiques are leading the way, and “the way” leads to the first-ever Pittsburgh Style Week. It leads to Yinzers taking fashion risks that don’t involve the word PINK emblazoned on their backsides. It leads to an up-and-coming downtown fashion district. We hope it also leads to you killing all of your cellulite-hugging spandex with fire.

Pittsburgh is not boring.
Calling Pittsburgh “boring” is like standing in your walk-in closet bursting with clothing of every color and style and then whining you “don’t have a thing to wear.” There is always something to do in Pittsburgh. This isn’t Snake Creek, Okla., where your best bets for diversion include the upending of snoozing bovines or climbing the town’s water tower even though your sheriff cousin expressly forbade you from doing so. Choose to open your eyes to the sporting, cultural and social options available daily. There’s nothing boring about Pittsburgh — except maybe the room at PPG where they watch the paint dry.

Pittsburgh is not dumb.
While I’m sure some like to imagine Pittsburghers as morons with IQs lower than SpongeBob’s pet snail Gary, Pittsburghers are an educated lot. Life-saving and life-changing inventions are being created, and discoveries are happening every year in our technological, medical and educational facilities. There’s no city in the country whose residents read the newspaper more widely and regularly. We’re 10th on Amazon’s list of most well-read cities for books. Know who’s not even on the list?

This article appears in the August 2013 issue of Pittsburgh Magazine.
Categories: From the Magazine, Hot Reads, PittGirl