Pittsburgh Home Renovation: There & Back Again

Roger Yost had a clear picture of what he wanted — and didn’t want — when he began searching for a home in the Pittsburgh area.

“After living on the West Coast and also in Tokyo for two years, I needed some space around me,” he says. “Everything [in those areas] was very cramped.”

Yost moved to Pittsburgh from Seattle in 2009 after being recruited by Allegheny Health Network; he now is the vice president of decision support services for the health-care provider.

When he arrived in Pittsburgh, he set two stipulations for his real estate agent: His home couldn’t require more than a 15-to-20-minute commute to downtown, and it had to be located on at least an acre of land.

After an exhaustive search that included viewing more than 30 houses, Yost, 52, found a diamond in the rough in Edgewood. 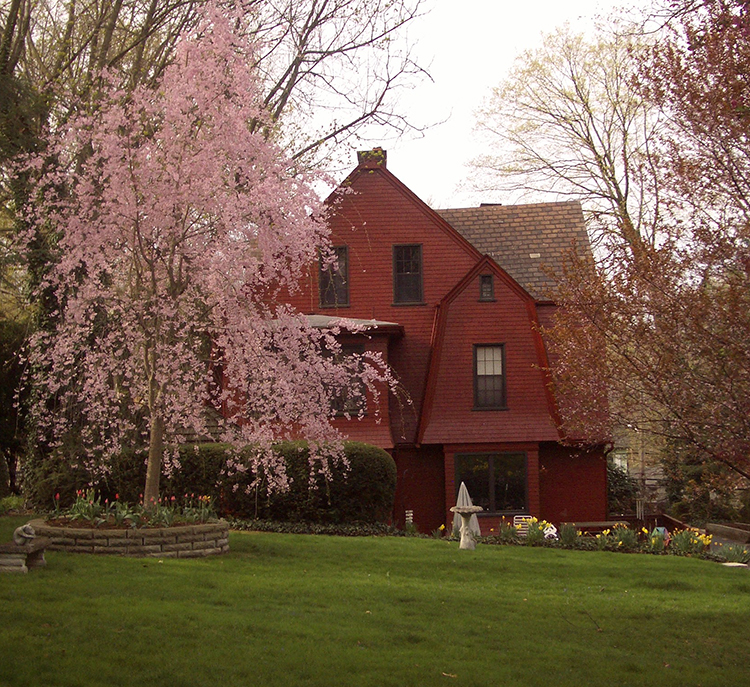 Built in 1901, the shingle-style house had been remodeled in the 1970s. Many of its original elements were covered over, and nothing had been updated since then.

Yost, who grew up in Lewisburg, Union County, recalls that the six-bedroom house was resplendent with shag carpets, silver wallpaper and a black- and pink-tiled bathroom that brought to mind pieces of Good & Plenty candy.

Still, its Craftsman-style elements — interior and exterior colonial columns and an open staircase with thick bannisters and spindles — enchanted him.

“It turned me completely off, but I could see through it,” he says of the home’s disco-era decor. “The bones of the house were intact.”

The house, which contains eight fireplaces, also sat on an acre of property. Yost says he’ll never forget the way his real estate agent, by then a good friend, teased him about the large property.

“My Realtor said to me, ‘My word, this is a mighty big house for such a small boy,’” he says. “I took that as a challenge.”

Yost has spent the last five years lovingly restoring the cedar-shake home’s historical elements as well as modernizing the kitchen and bathrooms.

​Kellen Fenaughty and Adam Lackett, who founded design/build company EngineHouse in Wilkinsburg, along with Engine House project designer Emma Davison, aided Yost throughout the renovation process. He met the former Carnegie Mellon University School of Architecture students, now designers and builders, through Dee Briggs, a sculptor and adjunct professor at CMU, and Ann Davis, the owner of Typhoon Lighting. Yost purchased most of the new lighting for his home through the Regent Square-based lighting company.

Yost says he opted to work with the EngineHouse builders because of their commitment to quality work. Among other things, the furniture makers designed, built and installed Yost’s kitchen cabinets and concrete countertops. 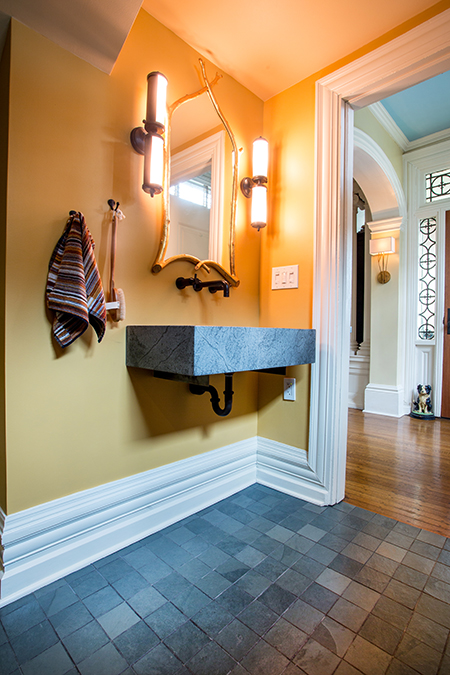 “The goal is to do careful, durable and really long-lasting work that will stand up to the test of time,” Fenaughty says.

Yost notes that Fenaughty and Lackett also were careful to take into account his opinions and desires.

“They included and made me a part of the entire design and the construction phase,” he says. “They were always checking in.”

The builders certainly were listening when Yost made specific requests for the kitchen and downstairs bathroom.

For the kitchen, Yost was inspired by the cozy eatery in the Kate Winslet-led romantic comedy “The Holiday.” At Yost’s urging, the designers dutifully sat down and watched the movie, which was set partially in England.

“I loved that little kitchen, so I said, ‘You guys have to watch this movie and get inspired by it,’” Yost says.

In an age where open-concept kitchen and living spaces are the norm, Yost’s kitchen is distinct in that it can be reached only through a narrow hallway. That’s exactly the way Yost wanted it.

“I wanted to feel [as if] you were coming out through a little cave and coming out into a big space,” he says.

He also added nautical-style lighting from Typhoon to the sunken room to enhance the feeling of being on a ship.

“I felt like I was in a galley in here because it sits down low, and you can look out,” he explains. 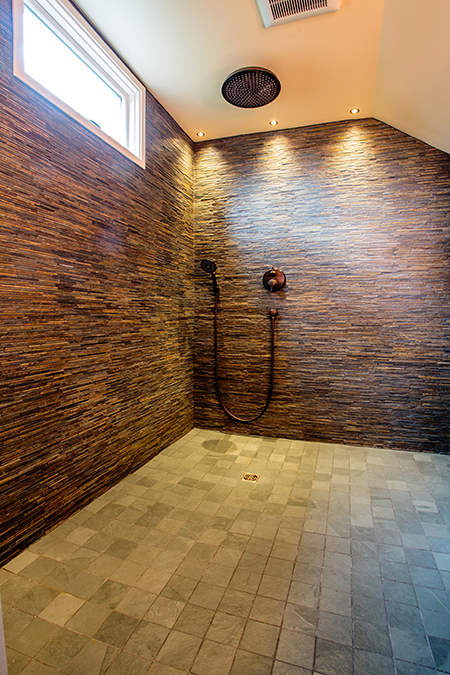 Yost took a more modern approach to the main bathroom. Influenced by the style in Japan, Yost’s tiled bathroom includes a shower with no doors dividing it from the rest of the room. “The bathrooms in Japan are sealed, and everything gets wet,” he explains.

In Yost’s case, he wanted to make sure the first-floor bathroom, which has no tub to step into and no threshold, would be accessible when he is older. The bathroom also has a sleek wall-mounted “floating” toilet with no visible tank. A drain in the floor rids the room of any excess water. “Roger wanted everything to be hose-downable as much as possible,” Fenaughty says. “Except for the light fixtures, everything can get wet.” 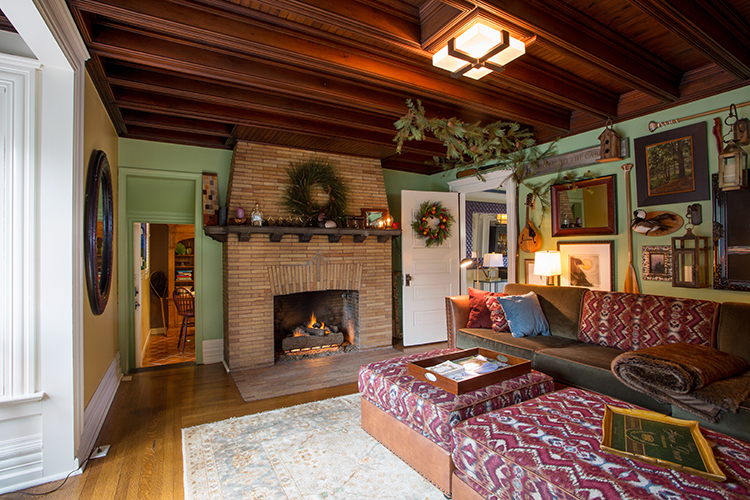 The home’s cabin-like den, which Yost describes as a “man room on steroids” includes furniture custom-made to fit Yost’s body from Gene Sanes Upholstery in the Strip District. It overlooks the lush backyard.

Inspired by abundant greenery that surrounded him while he lived in Seattle, Yost planted trees, added rocks and dug out gardens to add privacy and beauty to the landscape.
Rather than rebuild a porch that was stripped years ago from the front of the house, Yost created a landing using large rocks hauled on a flatbed tractor-trailer truck to his home from the Laurel Highlands.

Among the home’s dramatic elements is the chandelier over the second-floor landing. Under Yost’s direction, Typhoon owner Davis designed the piece, which features round globes suspended from a number of chains.

“I wanted it to be free-floating glass orbs,” resembling pieces he’d seen in the “Harry Potter” movies, he says. “When it’s dark, you can’t even see the chains.”

The landing also holds a window seat with a cushion Yost fashioned from a futon left from his days in Japan. Photographs that remind Yost of his rural roots line the staircase wall.

“When I was living on the West Coast, my parents sent me a couple of these photos,” he says. “I’ve been collecting them for probably 20 years now.”
After investing so much effort to make the home his own, Yost says he has no plans to move. He says Pittsburgh reminds him of Seattle in the 1990s, when that city was on the cusp of coolness.

“I love it here,” he says. “I like the mix of old and new, the old steel and the rough edges with the modern element. There’s this energy here, and people are just discovering it.” 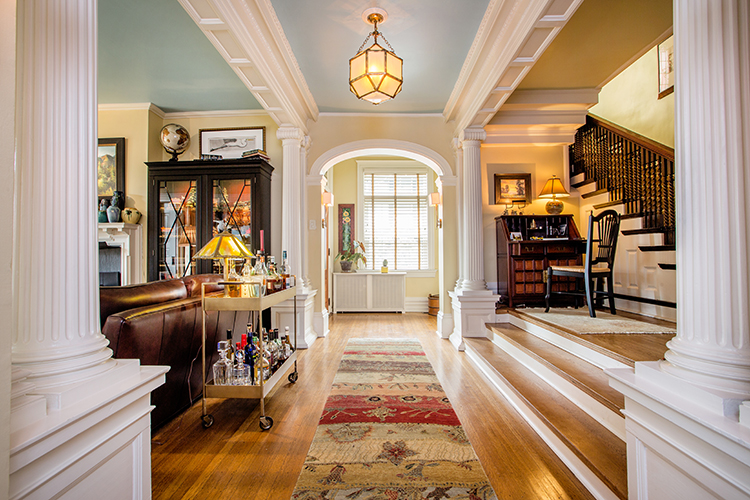 This article appears in the March 2015 issue of Home & Garden.
Categories: HOME + Design