Pittsburgh Groups that Made a Difference Near and Far

In an inspiring display of Pittsburgh’s heart, large organizations, school districts and communities made a spirited effort to help those in need after a series of natural disasters in recent months. We’ve highlighted five of the many groups in the area that embody the spirit of giving in a trying time. 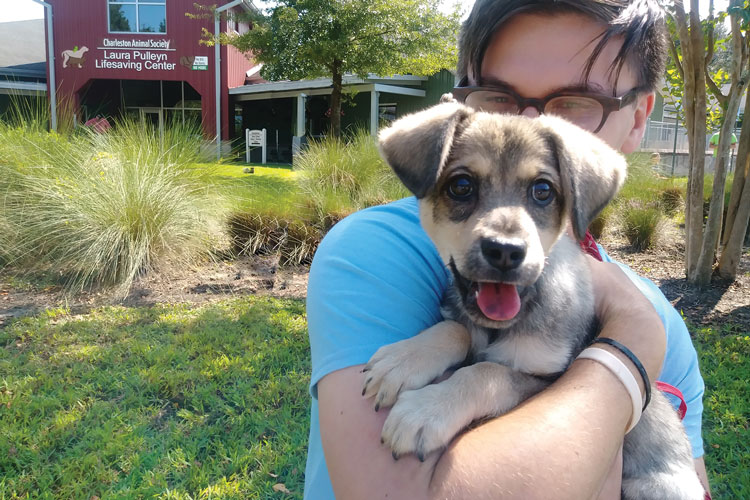 New Heights
PAART’s rescue team literally took off when they started helping animals in need in 2012, and the aftermath of hurricanes Harvey and Irma was no different. Volunteers from PAART (Pittsburgh Aviation Animal Rescue Team), which was formed by Brad Childs and Jonathan Plesset, first traveled to Texas, where they delivered supplies to shelters to help them keep functioning and saved 72 animals from the shelters to make room for pets displaced by the natural disaster.

Hurricane Irma brought the PAART team to similar rescue situations in South Carolina and Florida, where they rescued more than 100 animals. In addition to aiding in natural disasters, PAART focuses on rescuing animals in clear danger and helping underfunded shelters. Since PAART’s inception, the rescue team has saved upwards of 6,500 animals. Many of the animals that PAART rescues come to Pennsylvania, and PAART ensures all of the animals find temporary homes in shelters with quality care and a high likelihood for adoption. (nodogleftbehind.org) —JC 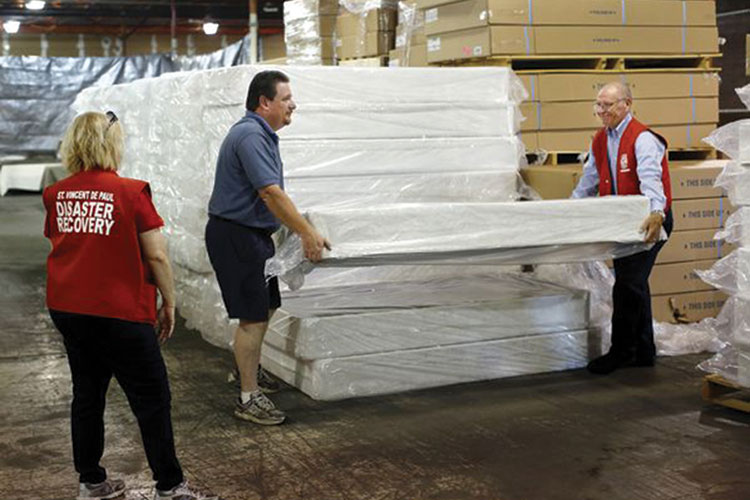 Comforts of Home
When a natural disaster destroys your home, the Society of St. Vincent de Paul has a way to help you begin to rebuild: a House in a Box. Chapters of the national nonprofit, including the Pittsburgh Vincentians, which have numerous locations throughout the region, were active in collecting supplies for the project for victims of Hurricane Harvey. Each House in a Box comes with the basic material necessities for living: beds, bedding, linens, bedroom furniture, living room furniture and dining needs such as dishes and utensils. (svdppitt.org) —JC 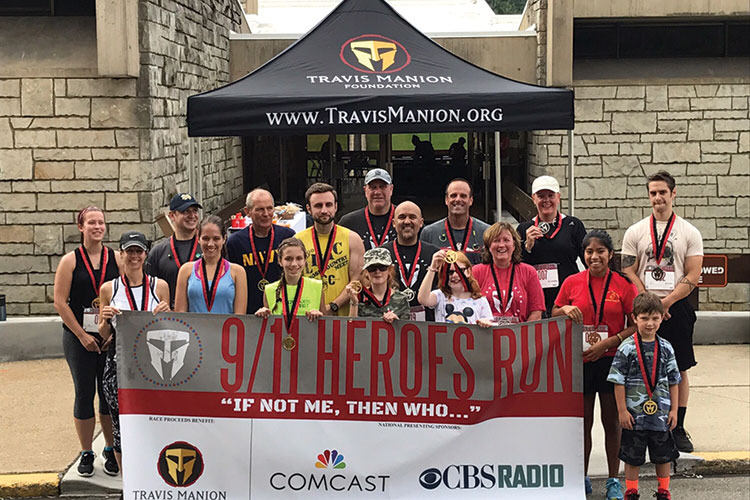 Racing for Reflection and Relief
Celebrating its 5th anniversary, the 9/11 Heroes Run of Pittsburgh will this year continue its mission to help first responders by offering support for those affected by Hurricane Harvey. The annual race traditionally honors the lives lost on Sept. 11, as well as veterans, military members and first responders who served— and continue to serve — their country. Proceeds from the race, which originated in Doylestown, Pa., and has chapters in multiple cities, benefit the Travis Manion Foundation (TMF), inspired by Marine 1st Lt. Travis Manion of Philadelphia, who was killed in Iraq in 2007 while saving wounded members in his battalion.

This year, the Houston chapter is assisting in flood recovery and aid from Hurricane Harvey. 9/11 Heroes Run races from across the country, including Pittsburgh, have been accepting donations to fund these relief efforts. The local run, held on Sept. 16 at Boyce Park, began with a 5K race led by a group of military veteran cyclists and included a 1 mile “fun walk.” After the race, the cyclists started a 10-day service expedition from Pittsburgh to Washington, D.C., stopping at predetermined points where they volunteered for home rebuilding projects to benefit veterans. TMF has also committed to funding a similar service expedition that will take place in spring 2018, where veterans and families of the fallen will volunteer to help with rebuilding efforts in Houston. (travismanion.org) —CA 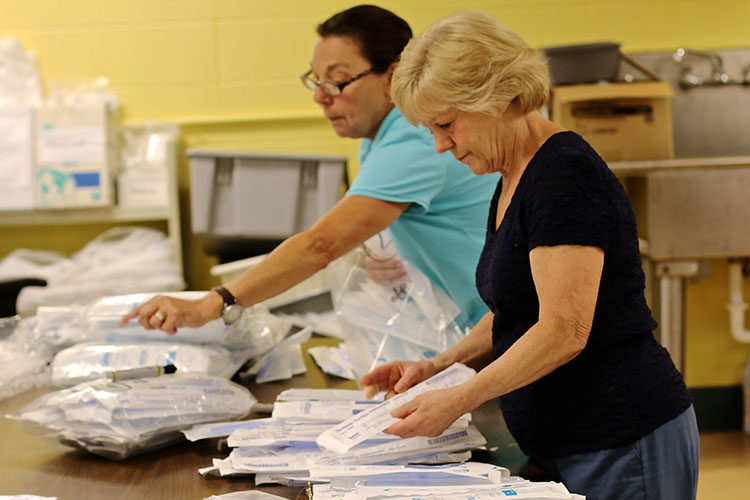 Local Aid for Global Problems
Often after disaster hits, hospitals and medical centers become overridden with patients and thus understocked in medical supplies. Global Links, a Pittsburgh-based humanitarian aid organization, works with doctors and nurses across the world to replace lost medical supplies, broken equipment and other damaged materials that result from disaster.

Working with local organizations such as hospitals, doctors’ offices and senior care facilities, Global Links recovers medical supplies that are usable but would otherwise be thrown out due to a facility remodeling or new regulations. Through GlobalGiving, a funding platform established in 2002, Global Links is accepting donations in an effort to raise $25,000 for Hurricane Irma recovery efforts in Cuba. These efforts will include replacing lost supplies and damaged equipment, as well as strengthening the public health system to improve long-term sustainability. Global Links also works to support victims of disasters in southwestern Pennsylvania and other communities. (globallinks.org) —CA 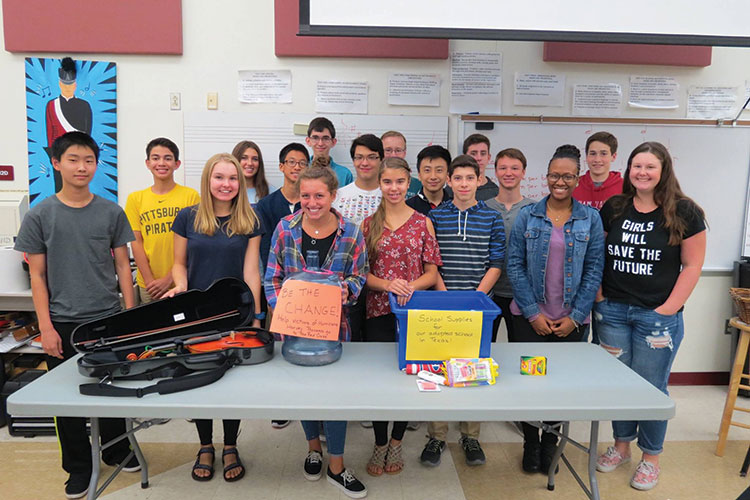 Be the Change
Within Fox Chapel Area School District, giving back isn’t a solo effort by a small, philanthropic-minded group of students. After Hurricane Harvey hit, students at all levels came together to get involved with the relief efforts. At Fox Chapel Area High School, the orchestra chose a school in Texas where they could donate school supplies and instruments, an often-overlooked area in the aftermath of a disaster that nevertheless can have a profound impact on students.

At Dorseyville Middle School, seventh-grade students Mary and Martin Stanton decided to organize a food drive for hurricane victims in Corpus Christi, Texas. The students asked for items such as hand-held snacks, pop top ready-to-eat items and other non-perishable food items. Bottled water, personal hygiene items and cleaning supplies were also collected — the students’ goal was to fill a 55-gallon drum to donate to a Corpus Christi food bank.

Teachers at Kerr Elementary School got involved with the fundraising efforts by donating money; in return, they’d be allowed to “dress down” on certain days. The entire school district participated in a “Be the Change” loose change drive from Sept. 5-15. The effort began in the high school but soon became a district-wide effort, with all of the collected money going to the American Red Cross. —JC