Pittsburgh Flicks and Nightlife in October 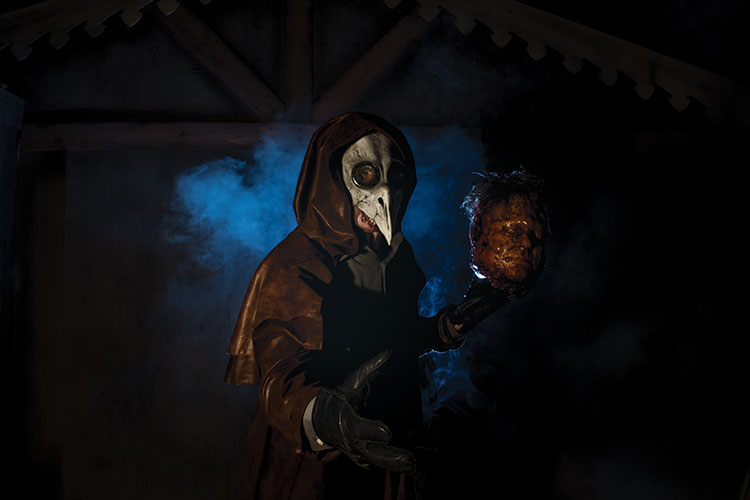 Jason Voorhees, Michael Myers, Pennywise the clown and countless other horror villains have one trait in common — they are remarkably hard to keep down. Fitting, then, that local Halloween attraction Hundred Acres Manor would prove just as resilient.

In early August, the Bethel Park haunt was robbed; approximately $30,000 worth of items vital to operating a sprawling haunted house (including sound and communications equipment, elements of a security system and even high-end special-effects products) were taken. Despite having to quickly source, buy and install replacement equipment at a time when most Halloween attractions are applying finishing touches, Hundred Acres Manor opened as scheduled on Sept. 8.

Director of marketing Tyler Kozar says the team was dismayed by the robbery, but undeterred. “We said, ‘There’s no way we’re not opening.’ The manpower we have put into this season — these are honestly the biggest and best sets we have ever done.” And, of course, Hundred Acres Manor is a nonprofit organization benefiting a range of local charities; even a delay of a few days would’ve meant less money raised.

“There’s projects we know that [our beneficiary organizations] are working on,” Kozar says. “They’re depending on that check. … Our goal in all of this is to give back.”

The newest area within the sprawling haunted house, and the marquee attraction for 2017, is dubbed “The Host” and is set in 19th-century London.

“You have the plague doctors, you have werewolves; boarded-up shops, rats. Within that, we actually recreated a large street scene in London,” Kozar says. Keep your eyes peeled for an original, authentic London phone booth dating to 1926; it’s one of only 40 in the U.S. (of course, you may be fairly distracted from sightseeing, what with Jack the Ripper roaming about).

Hundred Acres Manor is open most nights through Oct. 29; proceeds benefit charities including Animal Friends, the Homeless Children’s Education Fund and Ward Home. Want an extra challenge for your senses (and your courage)? Head back to the haunt in early November for a lights-out event, benefiting the Leukemia and Lymphoma Society. For a full schedule, visit hundredacresmanor.com.

“We always wanted to build and create a destination film festival Downtown,” says Kathryn Spitz Cohan, the executive director of Film Pittsburgh. The nonprofit organization has seen sustained success with film festivals including JFilm and the local outpost of the ReelAbilities festival; now, with the introduction of Pittsburgh Shorts, bold and independent short films will have a yearly, dedicated festival in the heart of Downtown.

Describing the first year’s crop of films as “fantastic,” with hopeful filmmakers from “all over the world [sending] hundreds of submissions,” Spitz Cohan explains that themed collections of shorts (each film will be no more than 40 minutes long) will be screened from Oct. 25-29 at the August Wilson Center. “We will for sure have a Hollywood block, meaning films that have celebrities in them,” she says. “On [the 28th], we’re having a Halloween party followed by a block of horror films.
We know we’ll have a family-friendly block.”

In addition, Pittsburgh Shorts will include a virtual-reality component, showcasing films shot and presented through the use of VR headsets. “I love film, and film certainly helps us to experience life through an artistic, visual medium; I think VR has the capability of taking that even further because you’re surrounded by the experience,” Spitz Cohan says. The final block of films shown will serve as a best-of-the-festival screening, based on audience votes. A schedule of films and ticket information is available at filmpittsburgh.org/pittsburgh-shorts.