Pittsburgh Flicks and Nightlife in November

This month: A trip with City Brew Tours and the premiere of The Rangos Giant Cinema 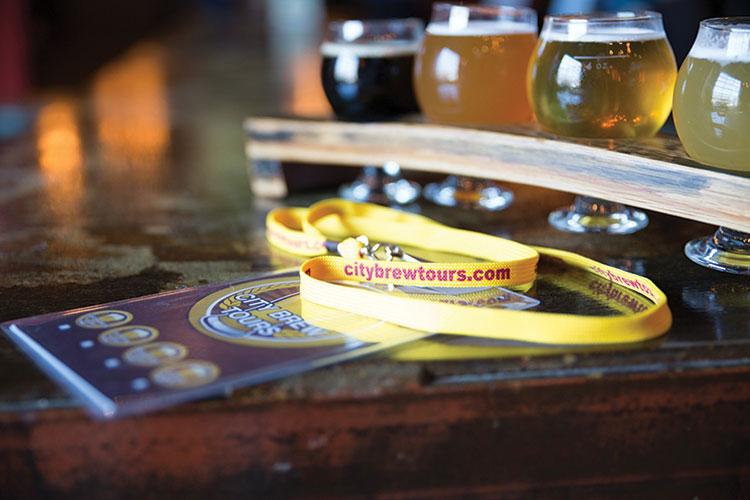 As I climbed onto the City Brew Tours Pittsburgh van on a mild Saturday morning, a thought occurred to me. I was embarking to evaluate an activity, to be nominally critical and theoretically objective — but, I thought, how could this possibly not be a great day? I was going to be chauffeured to a quartet of local breweries. At each, I would receive three to five samples of craft beer. At one, I would receive a hearty lunch, carefully paired with yet more beer. And along the way, I’d be getting nuggets of beer history, brewing technique and hoppy trivia. It can’t possibly go wrong — and it doesn’t.

City Brew Tours’ pair of offerings — the original variety, held on Saturday and Sunday afternoons, and the nighttime edition, available nightly from Wednesday-Sunday — offer plenty of behind-the-scenes access to local breweries for true hop heads and carefree tasting and touring for those not as interested in the details. The breweries visited represent a fine cross-section of the city’s burgeoning beer culture; my tour started at gluten-free Aurochs Brewing before hitting out-of-the-way Cobblehaus Brewing then returning to the city for Penn Brewery and Allegheny City Brewing. (Penn, deliciously, provided the food for the tour I attended, pairing German favorites with four of their beers.) And while the $99-per-person price tag may seem steep, imagine paying out-of-pocket for beers at four breweries, a meal at one and Lyft rides between each; you’re getting a bargain, all told.

It’s a fine special-occasion outing for a group (according to the company, anywhere from 4 to 400 people are welcome) and a good way to liven up an otherwise drab weekend. A word of advice, though — if you take the daytime tour, schedule a nap afterwards. All that sipping can be exhausting.

If you’re going to replace an icon, you better have something pretty impressive to offer. Fortunately, all indications would suggest that the first audiences to experience The Rangos Giant Cinema at the Carnegie Science Center will be dazzled.

The new theater and its 70-foot screen, still under construction as of press time, is set to open on Nov. 17; it replaces the beloved but outdated Rangos Omnimax Theater, which closed in July. “Amazon Adventure,” a 45-minute educational film about explorer Henry Bates and his voyages to South America, has been tapped as the theater’s first feature — and it is uniquely qualified to show off all the Giant Cinema has to offer.

“It’s a film meant to look, feel and sound fantastic,” says Chad Hunter, the theater’s director. Hunter points out that there’s breathtaking, 3-D images of the Amazon captured in the film, as well as sound intended for presentation in Dolby Atmos sound — an enveloping, 45-speaker surround-sound system (a typical theater has 14 speakers) and a highlight of the Giant Cinema’s capabilities. “I think we’ll have the best screen in Pittsburgh to watch a film on,” Hunter says.

Unlike the former theater, visitors will not only be able to see educational documentaries at the Giant Cinema; but wide-release, Hollywood productions will also receive periodic runs at the theater. While that won’t mean a year-round schedule of feature presentations (as distribution rules prohibit wide releases from sharing screens, so everyday blockbusters would permanently exclude educational films), Hunter estimates that 20 percent of the theater’s time would be given over to new releases and special events. “I think that we’re interested in a real balance and breadth of content.”

As for the first Hollywood film to appear at the Science Center? Ready your lightsabers: It won’t be confirmed until closer to opening day, but we can report that the theater is negotiating with Disney to show “Star Wars Episode VIII: The Last Jedi” beginning on Dec. 15.

This article appears in the November 2017 issue of Pittsburgh Magazine.
Categories: Things To Do