Pittsburgh Flicks and Nightlife in March

Circo Comedia, in Pittsburgh for a week-long run in March, is a combination of vaudevillian humor, sideshow stunts, juggling, balancing acts, acrobatics, pratfalls, slapstick, birthday-party magic shows and enough anarchy to inspire even the most reticent audience members to gape. 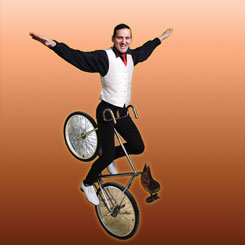 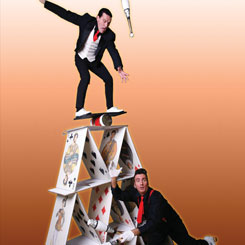 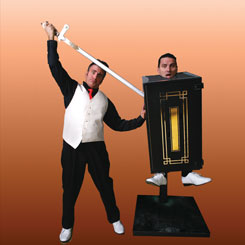 The Quebecois duo of Jean Saucier and Patrick Côté, who perform under the name Circo Comedia (circocomedia.com), prefers eccentricity, humor and energy to visual extravagance. Their approximately hour-long act is a combination of vaudevillian humor, sideshow stunts, juggling, balancing acts, acrobatics, pratfalls, slapstick, birthday-party magic shows and enough anarchy to inspire even the most reticent audience members to gape.

It’s Cirque du Soleil without the seriousness — more like Smirk du Soleil. While one expertly spins and twirls on a unicycle, the other playfully mimics these graceful maneuvers by hopping around on a ladder. While one balances on roller skates atop a life-size house on cards, the other yanks cards from the bottom of the deck. The duo had a successful turnout during its last visit to Pittsburgh and have returned for a week-long run March 5-12 at various sites. Expect a fair amount of audience participation.

Despite increased buzz around documentary films and series on television and via streaming platforms, in-theater showings of nonfiction films remain a rarity in the Pittsburgh area. With the exception of the occasional nature film, local filmgoers must often see lauded documentaries in their living rooms rather than in a communal setting. Just Films (justfilmspgh.org) recognizes the power of such works to foster dialogue — which, of course, is easier when there are more people present.

The group’s free, monthly documentary series, held at Chatham University, screens films with a focus on timely, contemporary social topics. Many of them have not been publicly shown in the area. All Just Films presentations will be followed by a panel discussion featuring experts on the topics at hand.

“We really believe in the power of film to connect to social justice issues,” says Jessie Ramey, director of Chatham’s Women’s Institute, one of four groups co-presenting the series along with New Voices Pittsburgh, the Women and Girls Foundation and the Women’s Law Project.

“Now more than ever, we need to be engaging people deeply in dialogue. These conversations are terribly important if we’re going to do this hard work of social justice.”

On March 16, Just Films will screen the 2006 documentary “Finding Dawn,” which brings to light the under-reported number of Aboriginal women who have been murdered or gone missing in Canada; the film was directed by Métis filmmaker Christine Welsh.

“It’s really an unrecognized gender justice issue; it extends across borders,” Ramey says. “This is something that [impacts] our country as well.”

To date, Ramey says the series has drawn a cross-section of Pittsburgh voices. “I’m encouraged by the number of people who have been coming out to this series and the diversity of voices … I think this is one of the ways we can move forward together.”