Pittsburgh Flicks and Nightlife in June

We've got the schedule for the summer's Rooftop Shindigs Downtown. 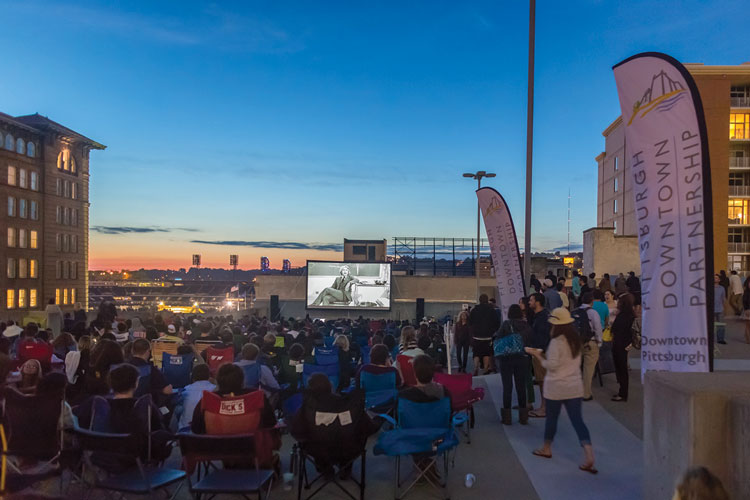 Not since the closing of the Top of the Triangle restaurant has there been a better reason to hang out atop a building Downtown. Through September, the Pittsburgh Downtown Partnership (downtownpittsburgh.com) will host a monthly Rooftop Shindig on the ultimate floor of the Theater Square Garage at 667 Penn Ave.

Each evening will feature food trucks, special beer and cocktail offerings and live music — all before the screening of a film projected onto a portable screen with the North Shore as a backdrop.

On June 15, the Shindig will feature director John Waters’ 1988 comedy “Hairspray.” Later remade into a more mainstream Broadway musical (which itself was adapted into another film), the original “Hairspray” is a story of underdog triumph and racial equality starring a young Ricki Lake; the supporting cast includes Jerry Stiller, Debbie Harry, Sonny Bono and frequent Waters collaborator Divine.

The movie starts at sundown; before dark, funk outfit Beauty Slap and synth-fueled indie rockers HEAF will perform as guests. Hit up the food trucks and set up chairs for the flick (and if you don’t have your own portable seat, you can buy one on the spot).

The lineup for the rest of the year: On July 6, local favorites Donora and Meeting of Important People will perform before a screening of “Anchorman: The Legend of Ron Burgundy.” Indie pop act Brightside and “Ferris Bueller’s Day Off” are set for Aug. 3. The series will conclude with a set from The Commonheart and a showing of “Mad Max 2: The Road Warrior” on Sept. 14. Admission is free; pets and outside food and drink are not allowed. And no need to party in the rain: In the event of inclement weather, the shindig will be postponed 24 hours. (downtownpittsburgh.com/what-we-do/programming/rooftop-shindig)

​Uncumber Theatrics inverts the traditional theatre experience. Instead of passively watching a scripted performance on stage, audiences “activate” a story hidden in a controlled environment.

Previous productions have included speed dating as theatre and a murder mystery emerging through objects in an estate sale. Uncumber’s latest production (running through June 11) is its most ambitious. Serpentine is an “alternate reality game,” where ticket-holders are given entrance into a storyline lying in wait within people and locations throughout the East End of Pittsburgh and across the internet.

You’ll begin in the office of a private investigator and gradually uncover clues and meet suspects and conspirators that help illuminate details of an actual cold case from Pittsburgh’s past. The experience combines the elegant paranoia of film noir, the engagement of a video game and the joy of a scavenger hunt. The curiosity of the audience not only will guide the trajectory of the story but also influence its conclusion. (uncumbertheatrics.com)