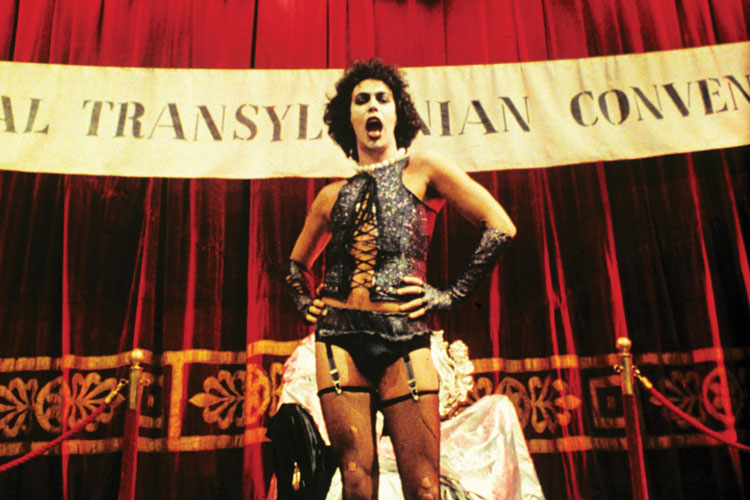 In the August 1981 edition of Pittsburgh Magazine, our distant predecessors handed out bests and worsts to various institutions around town. The former King’s Court Theater in Oakland was not favored at the time; we wrote, “The Rocky Horror Picture Show gags are getting stale.” Little did those long-ago editors suspect that, 35 years later, the same jokes still would be made in Pittsburgh-area cinemas — and in front of movie screens all over the world.

The enduring popularity of the 1975 comedy-musical springs from the spirited midnight showings presented with the aid of a live “shadowcast,” a group of superfans who act out the film in front of the screen; meanwhile, call-and-response jokes hurled at the screen are handed down via word-of-mouth from one crowd to the next. “It thrives because of the fans,” according to Samantha Swope, who has been a part of the local “Rocky Horror” group, the Junior Chamber of Commerce Players (steelcityrockyhorror.com), since 2009.

“Some people view it as a part of film history, a tradition — or even an escape or place to fit in.”

And while the callback lines and traditions — such as, say, tossing rolls of Scott toilet paper into the air when a character exclaims, “Great Scott!” — may not have changed much through the decades, Swope insists that each performance carries its own variety.

“While it is the same movie, every show we put on is a different experience. There are so many things that can shape the show.”

The JCCP will take over the Hollywood Theater (thehollywooddormont.org) twice this month with both showings at 11:45 p.m.; on Sept. 10, cast members will dress as cartoon characters for an animation-themed show, then don their normal fishnets for a screening on Sept. 23.

Theatre in Shakespeare’s day was a lot more run-and-gun than we may realize. To reduce rehearsal time, the text of a script often told the actors how to perform a scene and how to move across the stage using clues embedded in the grammar, spelling and meter.

The New Renaissance Theatre Company’s Unrehearsed Shakespeare Project (unrehearsedshakespeareproject.com) revives these techniques to enliven the familiar works of the Bard — expect more movement and a lot more emoting. All summer, the troupe has been showcasing its “Unrehearsed Cue Script Technique” in a series at Allegheny County parks (412/350-2528, alleghenycounty.us/parks/contact/index.aspx).

As part of this year’s Britsburgh, an annual six-day celebration of British culture, the troupe will perform a medley of Shakespearian scenes on the main lawn of Hartwood Acres Mansion. The performance starts at 6 p.m. Sept. 10 and will be followed by a free screening of “Mary Poppins.”