A developer in the South Side may fulfill KDKA anchor Ken Rice’s wish for shaded benches along the city’s riverfronts. 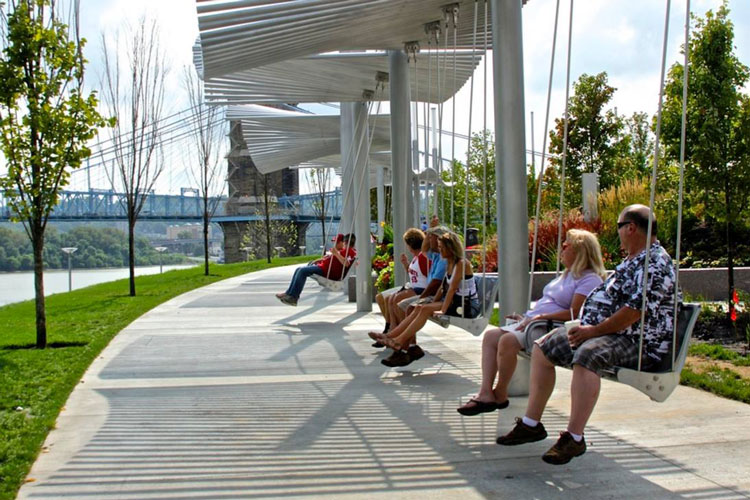 KDKA’s Ken Rice first began advocating for bench swings along Pittsburgh’s riverfronts last summer. Now, about a year later, someone could be answering his call.

Rice sparked a conversation about installing bench swings along the city’s rivers in June 2017, when he suggested in a Facebook post that they could replace the grounded benches in Point State Park.

His post drew the attention of hundreds of Pittsburghers. The idea become so popular that Rice ended up taking it to the airwaves, traveling to Smale Riverfront Park in Cincinnati last summer to interview visitors and city officials about the park’s bench swings. The locals raved to him about the relaxing effect of the swings and their immense popularity.

The Pittsburgh area is home to only a couple riverfront swings at the moment — Oakmont Riverside Park has two bench swings overlooking the Allegheny. Rice initially proposed that more of these swings should be installed at the Point. Then-CEO of Riverlife Vivien Li voiced support for his idea, but suggested that a private shoreline property owner might also allow some of their land to be used.

Izzy Rudolph may be that property owner, Rice has found. His company, McKnight Realty Partners, is currently transforming the Terminal Building complex on the South Side from a train depot and storage facility into an office and retail complex. The property he bought includes a stretch of riverfront along the Monongahela river, where Rudolph is thinking about allowing the swings Rice raised so much interest in to be installed.

“When you’re trying to do something special on the riverfront, the first big step forward is having a property owner that’s willing to consider all options,” Stephan Bontrager, Vice President, Communications and Outreach for Riverlife told Rice. “I think that the swings are an incredible idea.”

Rudolph told Rice he would consider offering up the land so long as the proper funds can be raised to build and maintain the swings. Where this funding would come from isn’t clear yet — Stephan Bontrager, Vice President, Communications and Outreach for Riverlife says funding could come from corporate funds, partnerships or foundation support, among other options.